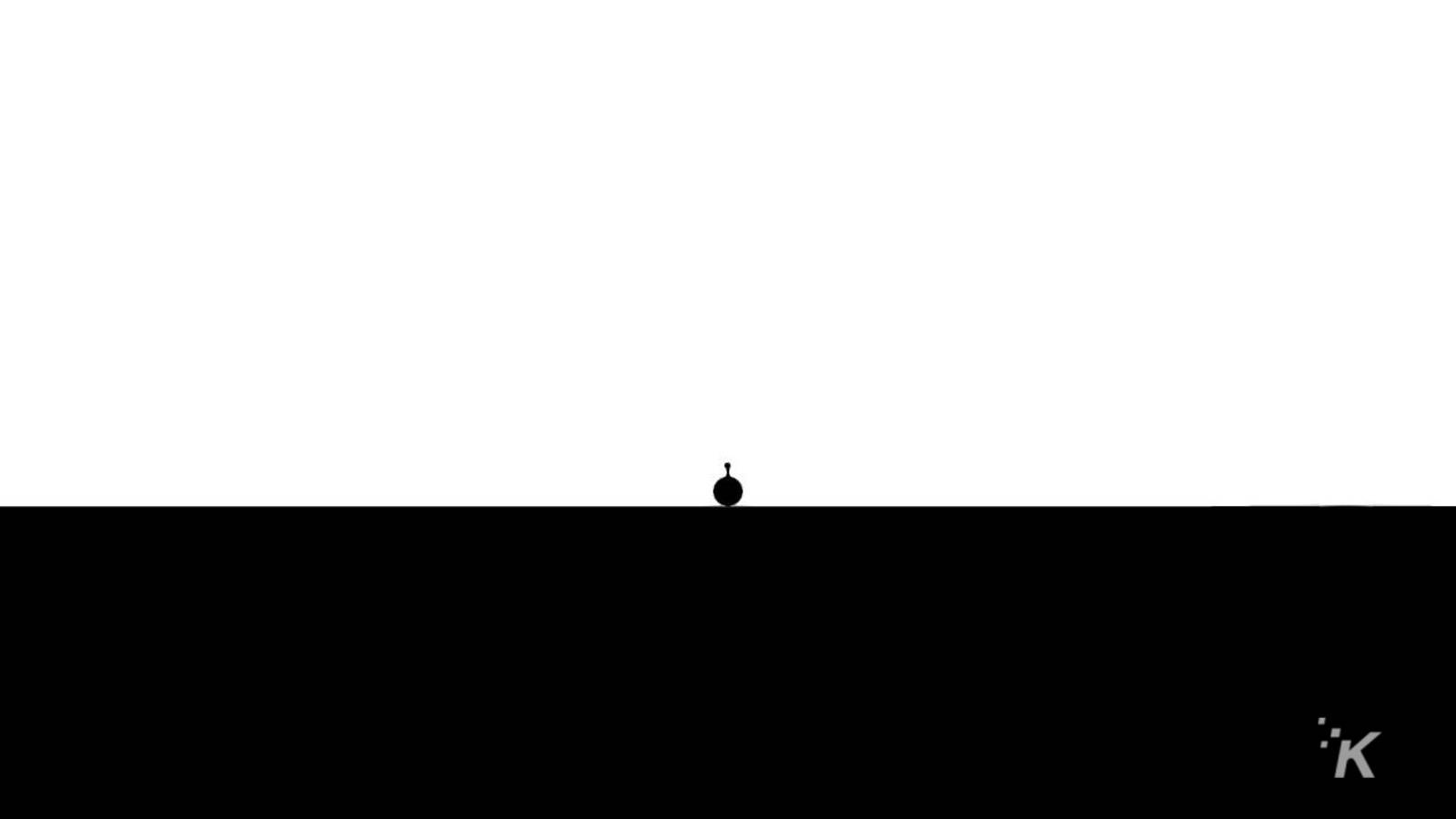 There’s no title screen when you start playing OVIVO, just a flat plane of black and white.

There are no colors, no words, just a screen that’s about 2/3 white on top, 1/3 black on bottom, and a little circle with what appears to be an antenna. With such an interesting aesthetic, I had to check this game out, so here’s what it’s like to play the first game from Russian studio IzHard.

You learn how to play just by fumbling with the controller 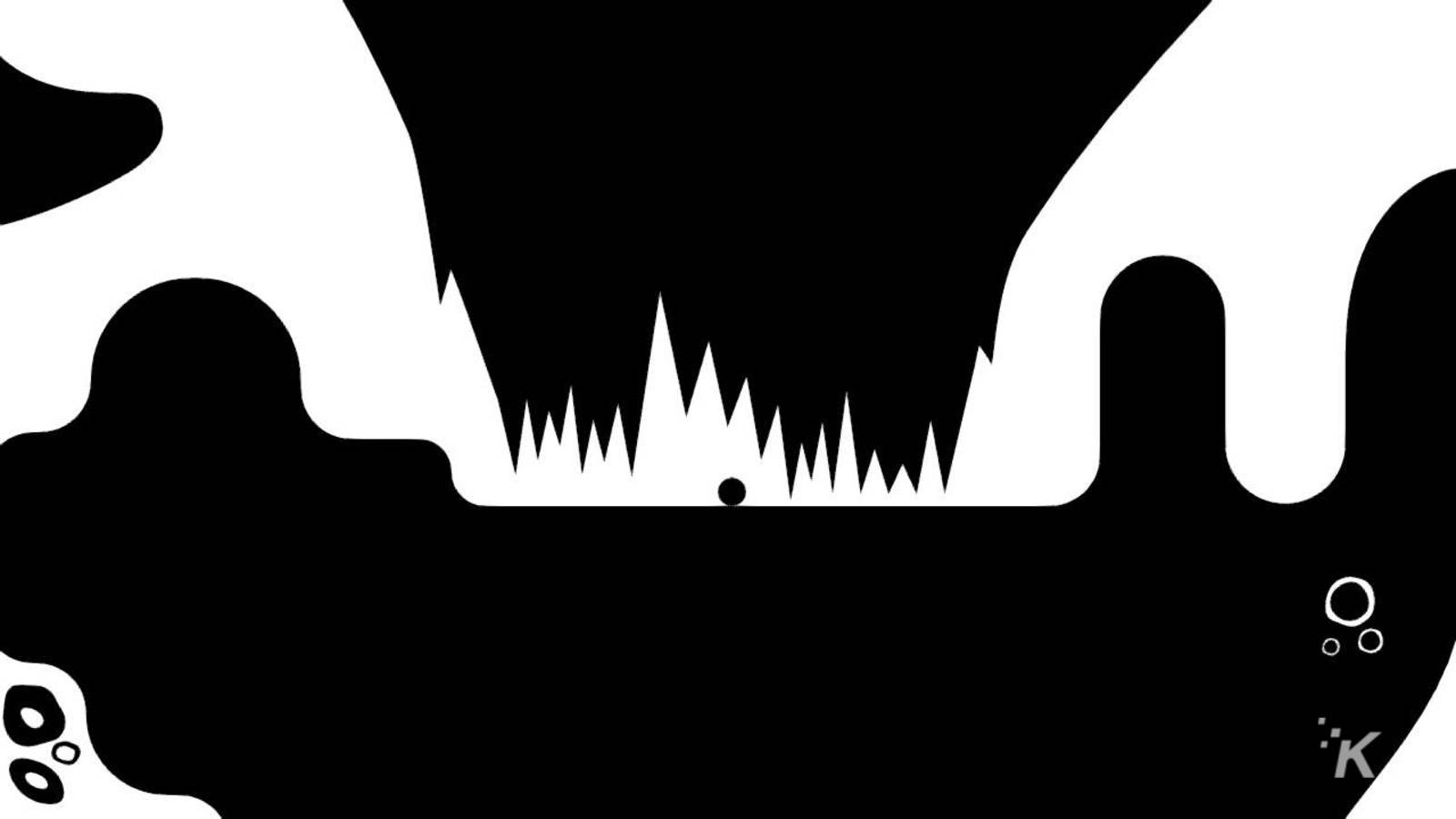 Spikes “kill” you and make you go back to a checkpoint. I actually don’t know the appropriate word, because you’re just an abstract circle so can you “die?” (Image: Jake Vander Ende / KnowTechie)

Either the left analog stick or the d-pad moves the little circle left and right. The A button changes, or queues up a change in, your circle’s color, swapping you between black and white.

When you’re black and in the white world, gravity pulls you downward. When you switch to white in the black world, gravity pulls you upward. Mechanically, that’s the game. You move left and right, constantly switching colors to bounce and roll and fly (fall?) through the game’s levels. If you’ve ever played a physics-based platformer, you generally know what this gameplay is like.

Your only options are music and sound effect volume levels, all presented in a menu without any words in it. This game is extremely committed to its theme and aesthetic, but I feel like button remapping is a fairly practical consideration that just seems overlooked.

KORAL just built this in by default, incorporating multiple button redundancies and even allowing the entire game to be played with one hand, so that’s now my bar for games with simple control schemes that could be made more accessible. OVIVO has a recurring theme of an ouroboros and I feel like this sort of thing is a good example of one way the game is just devouring itself for no good reason. 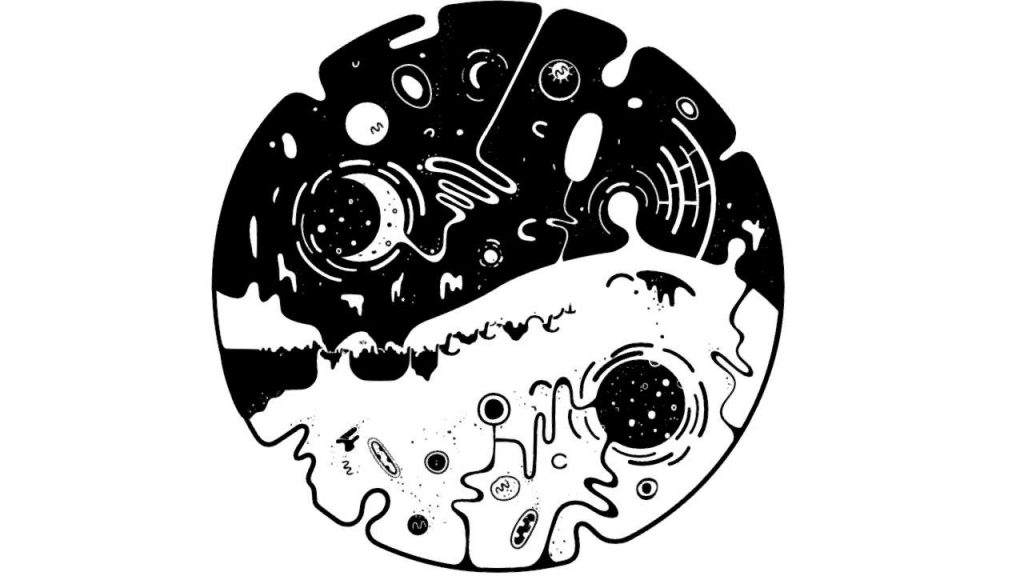 Screenshot: Jacob Vander Ende / KnowTechie. When you finish a level, the game actually zooms out to show you the whole level. Is this one a cell? OVIVO is filled with ambiguous, abstract imagery like this.

Moving on from that, I have to say that the next thing that struck me was the game’s soundtrack. Easily the best part of this game is the stellar, ambient soundtrack by Brokenkites, an OST I would put right alongside the best of the best electronic beats to chill out to.

My only complaint here is that it’s not on Spotify, because I’d love to listen to this one when I’m not playing.

That calming soundtrack is important, because while OVIVO is often surreal, dreamy, and meditative in its clever level flow, world design, and visual presentation, sometimes the game will just sucker punch you with a segment that’s brutally hard out of nowhere.

OVIVO difficulty can sway drastically, and without warning 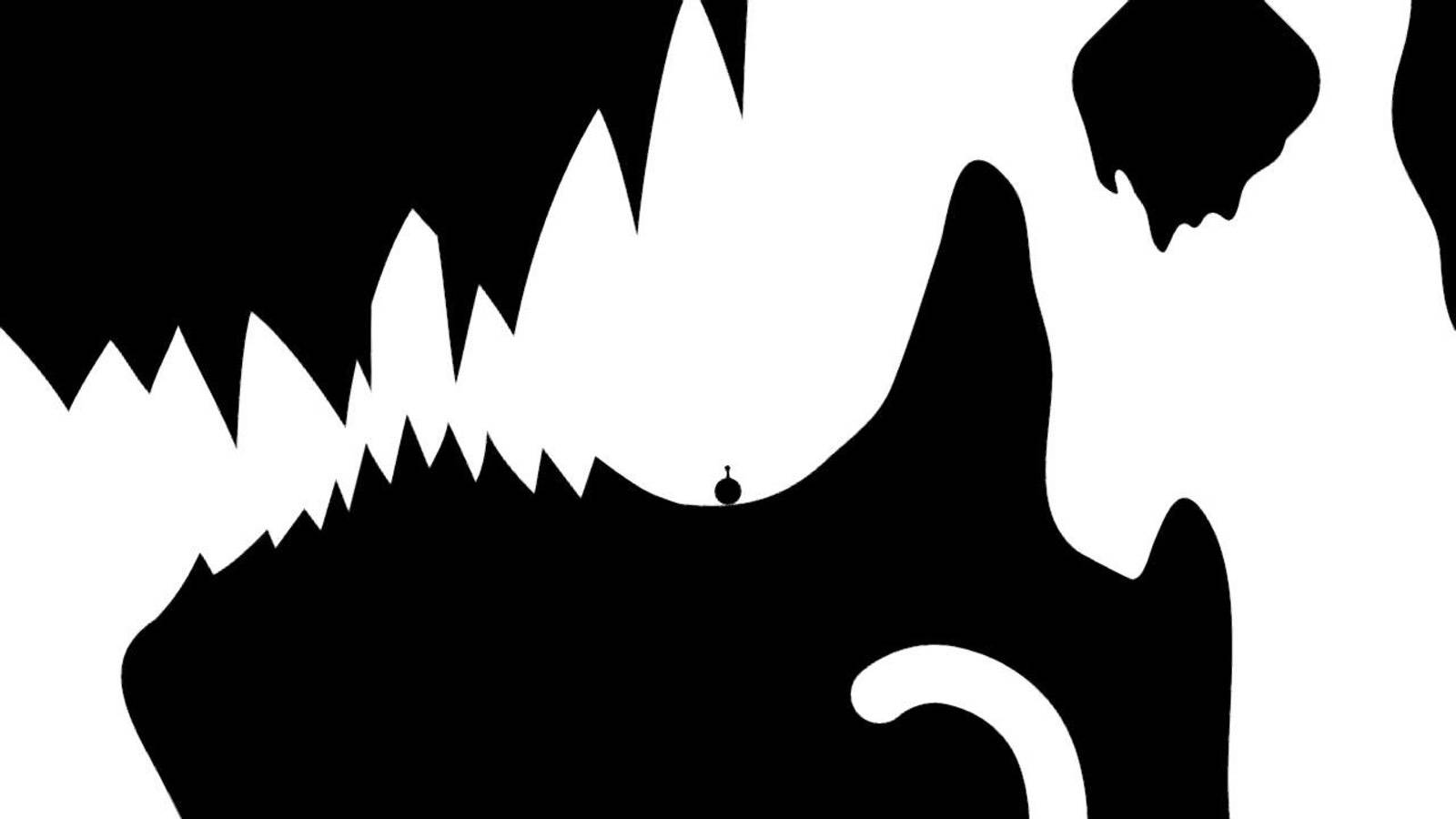 After breezing through most of the game up to this point, I must have done the above section fifty times before finally succeeding. If this was optional, that would be fine, but once I was in this area I was checkpointed and stuck in place with no way to leave. Ouch.

Still, OVIVO asks the question, “What if Ibb & Obb was black and white, single-player, and not tedious?” and comes up with a good answer.

It’s an abstract, monochromatic fever dream, the presentation is unreal, and when it does flow, it feels satisfying and playful. I just wish it was more consistent in delivering those moments, because there’s nothing else here. 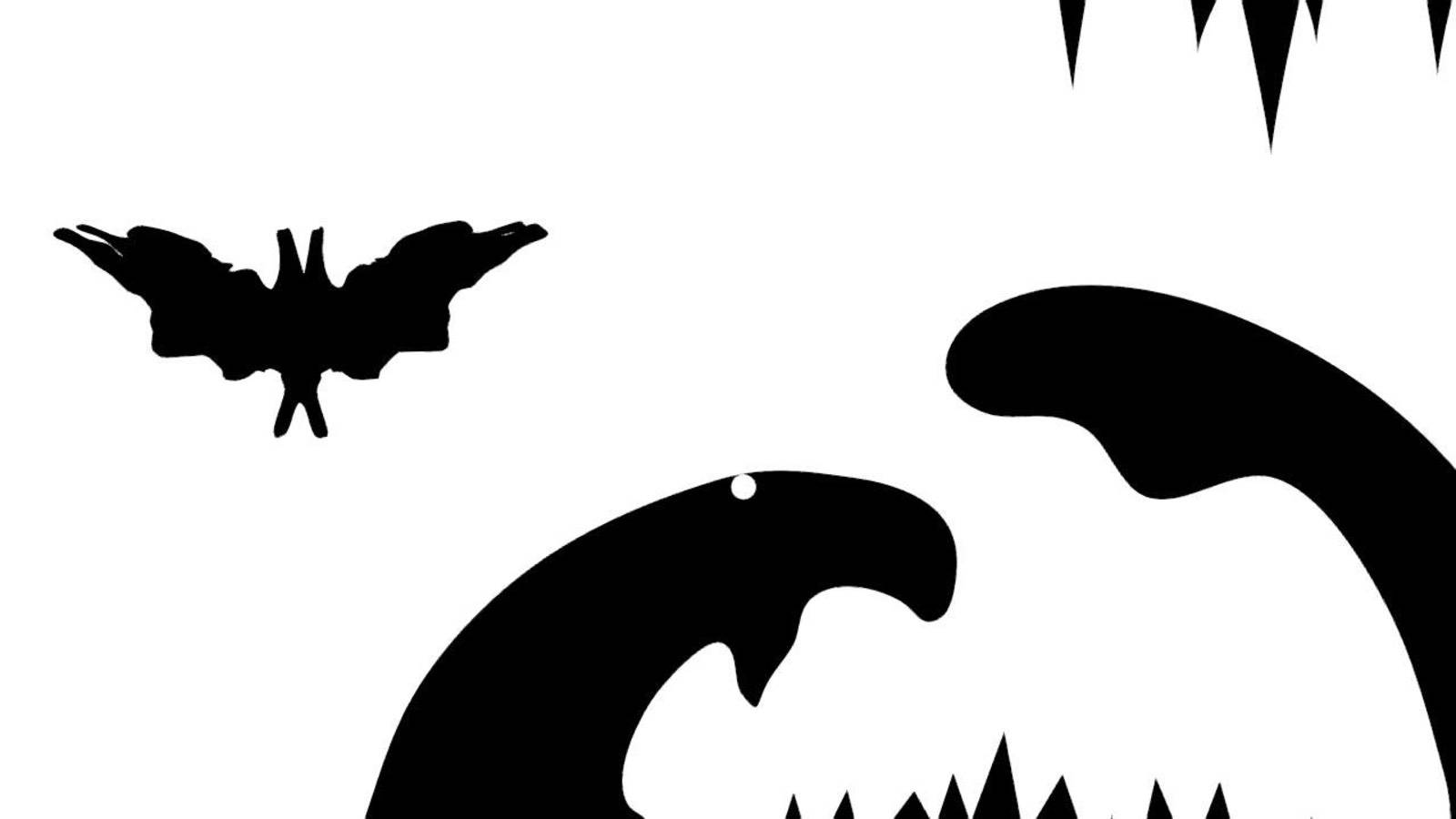 I’d recommend OVIVO to the same audience who liked KIDS but to those who want more gameplay to go with their existential art installations. It’s fundamentally a physics-driven platformer, so if you like those you’ll be right at home here.

Jake reviewed OVIVO on Nintendo Switch with a code from the developers. It is available now on iOS, Android, Windows, OSX, Xbox One, PS4, and Nintendo Switch.