Budget is no longer a bad word. 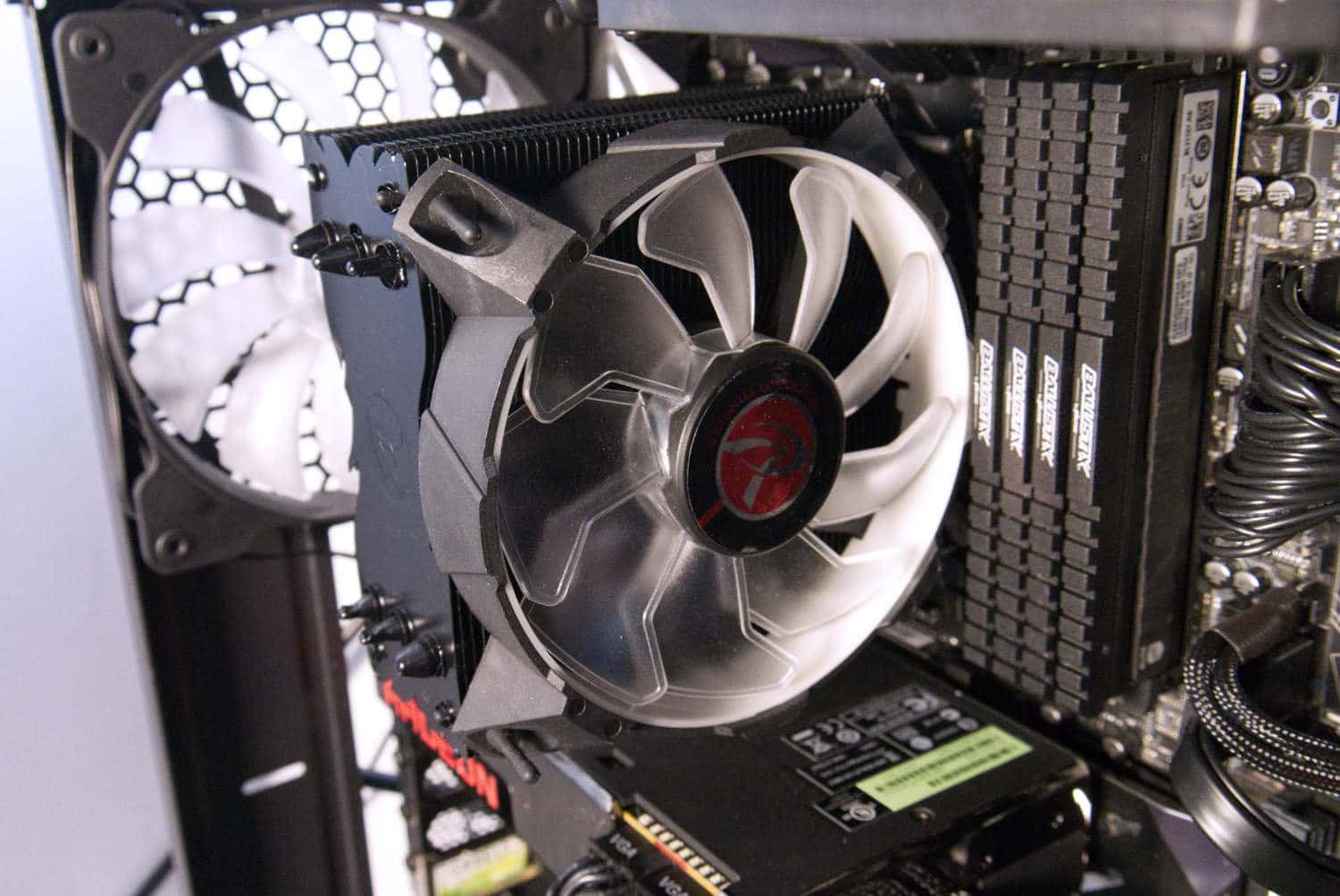 On the test bench today, is a new air cooler from Raijintek, the LETO. Raijintek is aiming at the budget end of the market with this cooler, with a price tag of $36.99 currently on Newegg. This is an interesting choice to me as most companies appear to be targeting the high-end of the market. Let’s see how well it fares.

This is all fairly standard for air coolers, and it’s nice to see AM4 compatibility out of the box. 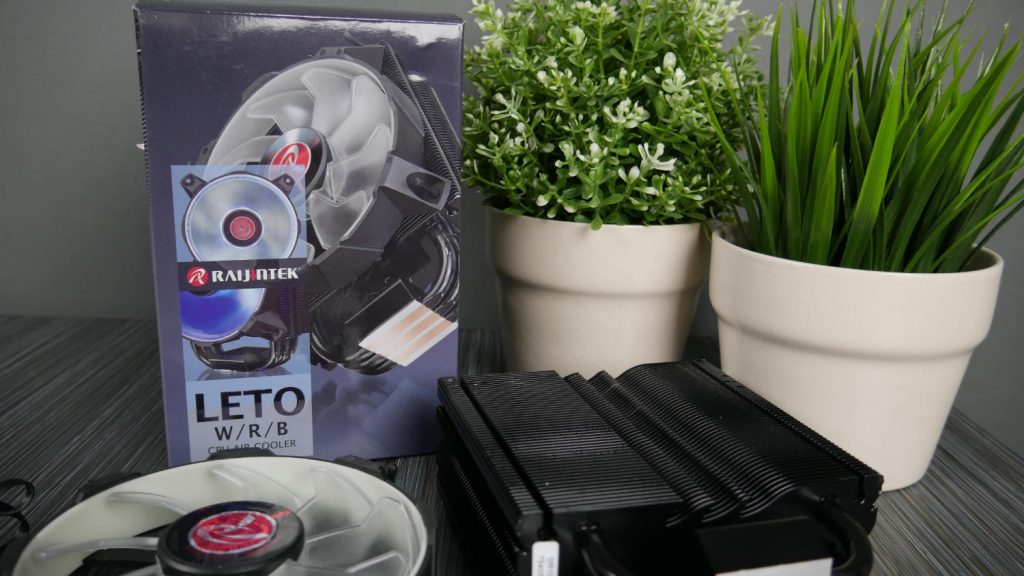 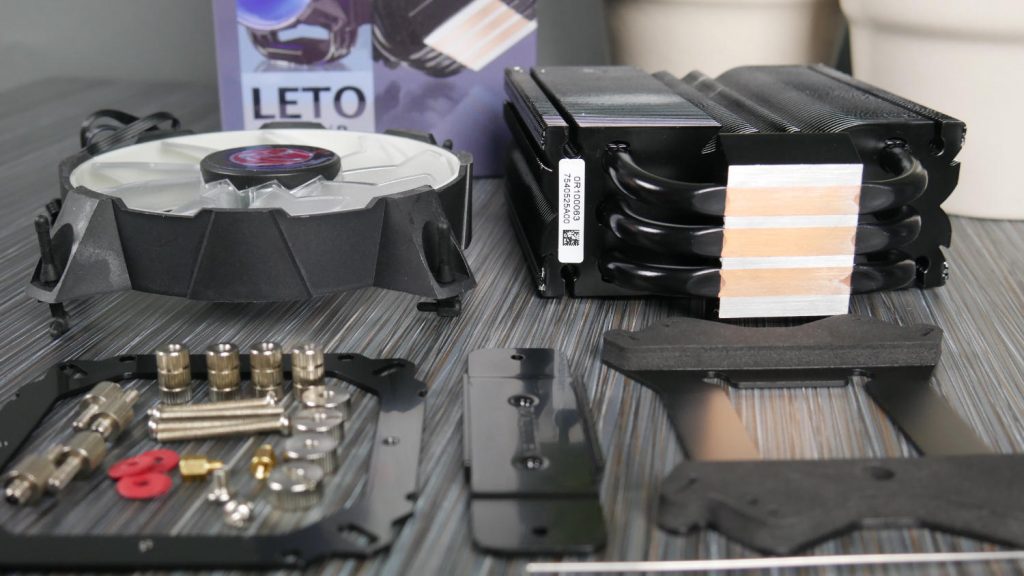 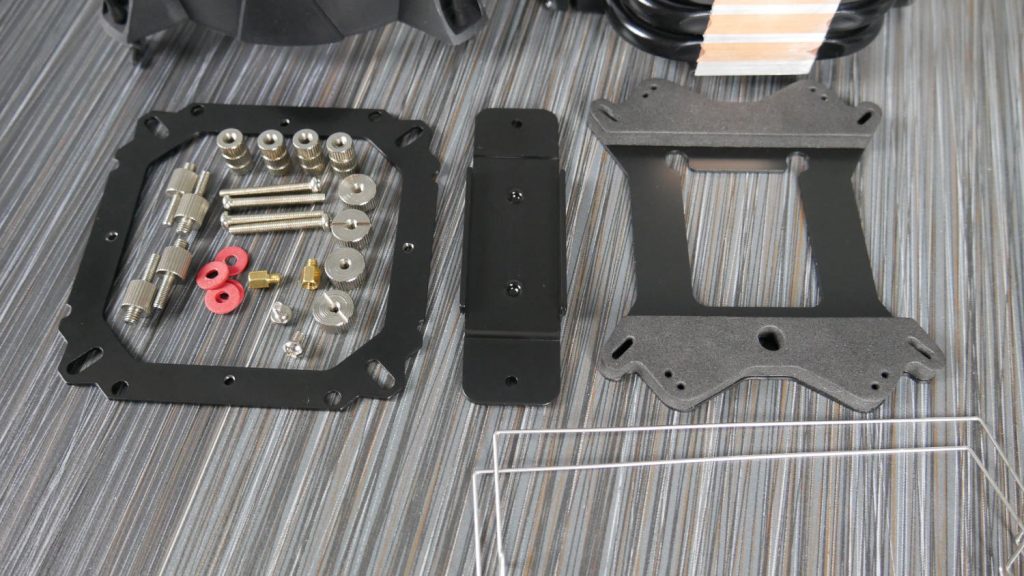 The LETO comes in a compact box, with mounting hardware that supports both Intel and AMD chipsets. Note the CPU Direct Contact heat pipes on the contact area, with the rest of the contact area being aluminum. This gives enough contact to cool the CPU effectively while keeping manufacturing costs down. The mounting hardware comes in bags that aren’t separated for use on Intel/AMD, something that isn’t ideal but it’s easy to separate them out according to the instructions.

I like that Raijintek has powder-coated the fins black, this is something often earmarked for high-end coolers so to see it on a budget-orientated cooler is welcome. They also aim to distinguish themselves with a LED-equipped PWM fan, with a sleek design I’ve not seen from the competition. This fan has 8 LEDs in the central hub, which is a nice difference from the usual four LEDs in the outside frame from budget fans. With the cooler being 157mm tall, it should fit most cases but it’s always worth double-checking for your individual case.

I’ll walk you through the installation process now. Note that we tested using an AM4 platform, so the process will reflect that. 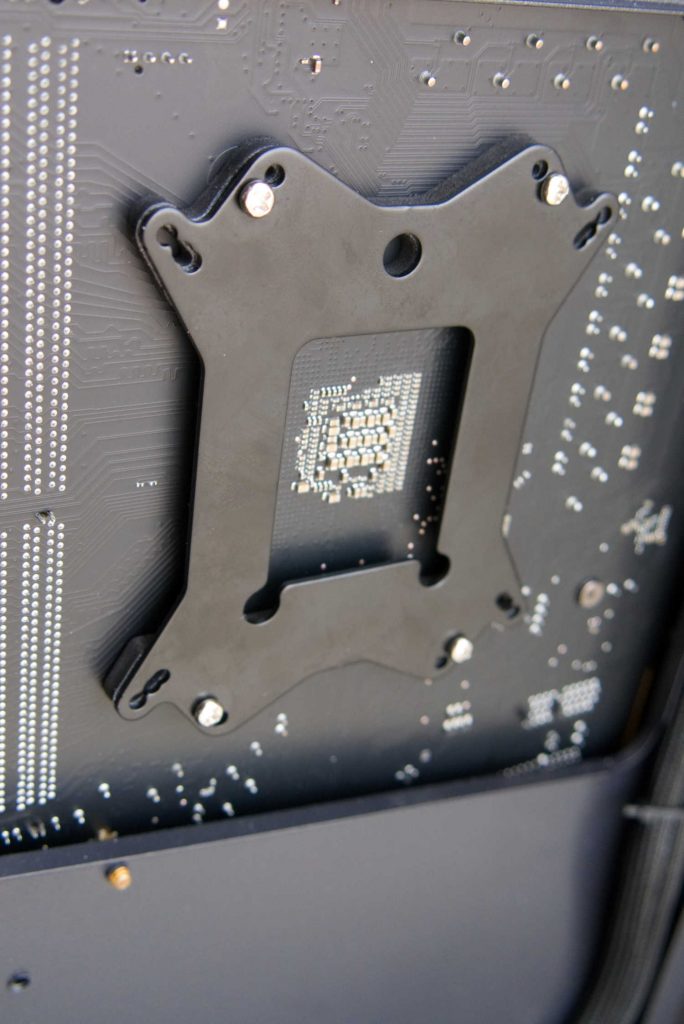 Then there are four black nylon threaded spacers that go onto the screws on the other side. These hold the backplate in place and also space the cooler mounting hardware to its desired height. Then you put the black square from over the screws, and secure them with the thumbscrews. There are also two brass pegs, which need to be screwed onto the frame according to your desired orientation of cooler. In our case, it’s closest to the RAM slots and the hole opposite. 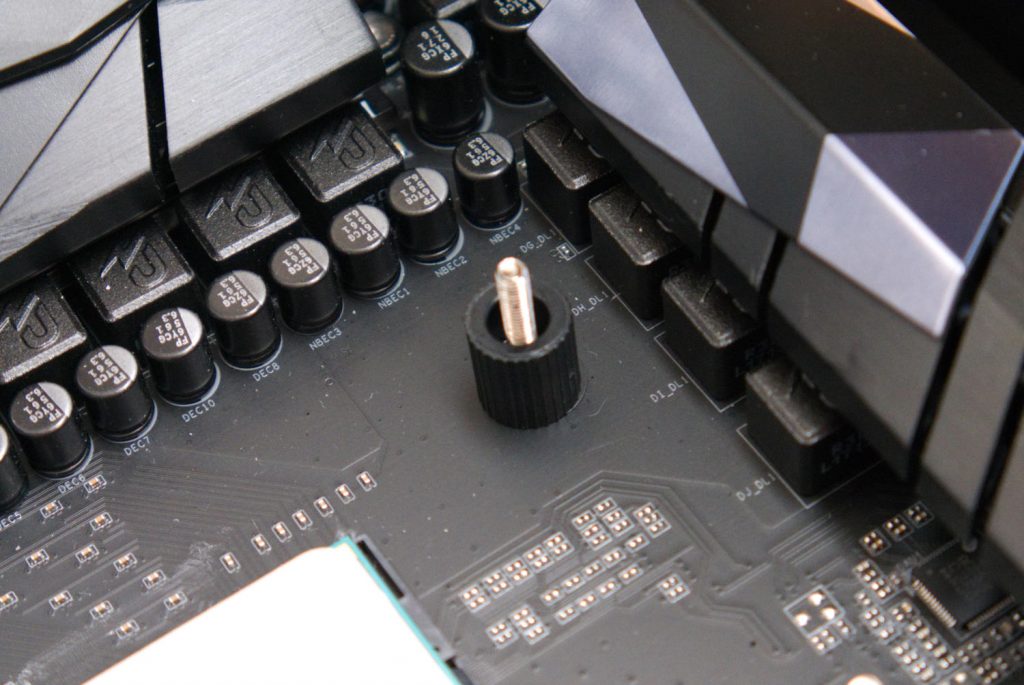 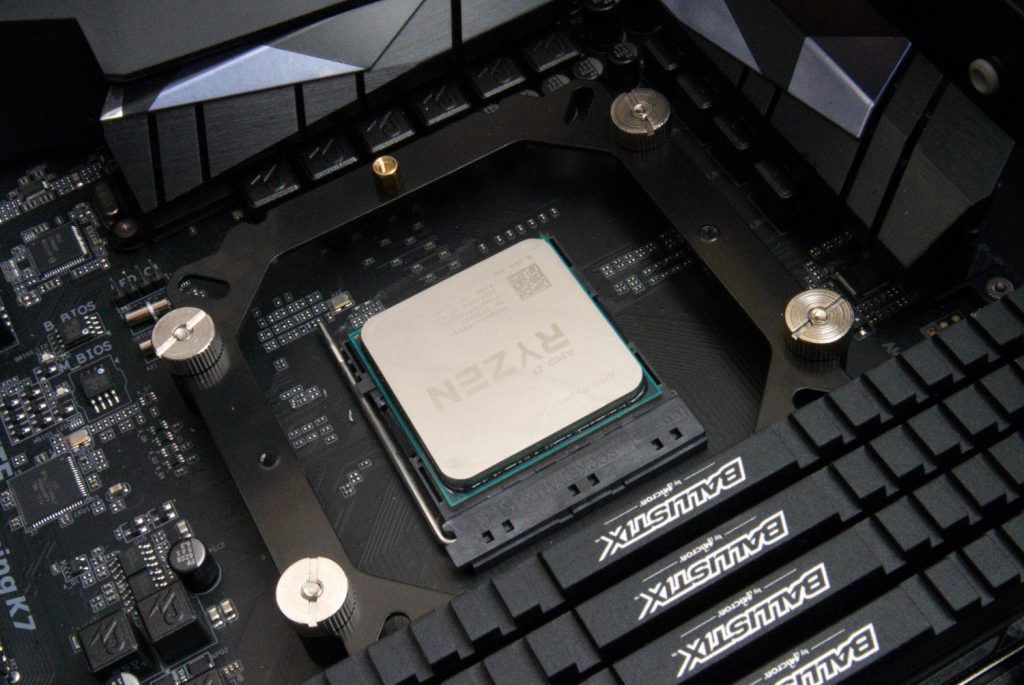 After you put thermal paste on the CPU, line the cooler over it ready for the securing bar. This goes through the hole in the cooler, and lines up with two small bumps on the top of the heatsink area. The last stage for the heatsink is to screw the two small mounting screws through the securing bar and into the brass standoffs. One thing I will say, it was all easy until this last step, where I had to put more pressure than I’d like to get the second screw to mate with the standoff. Not a big issue, but worth keeping in mind as you install. 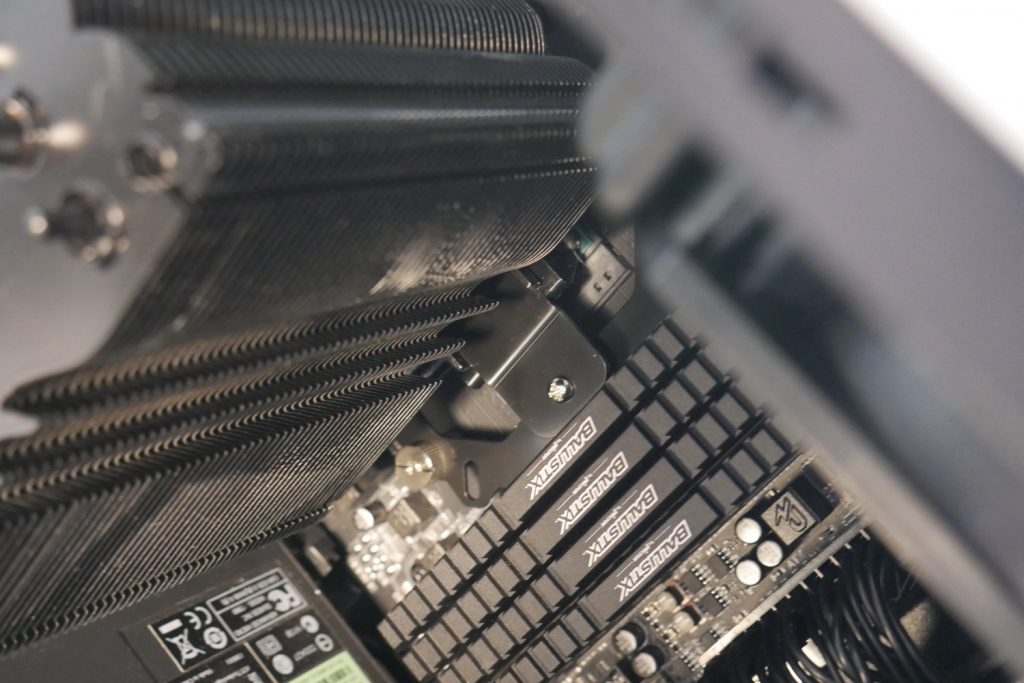 Raijintek used an interesting fan mounting system with rubber pegs that go through the fan and into grooves in the fins of the heatsink. This helps to reduce vibrational noise. There’s also a couple of wire clips for extra security, similar to other coolers on the marketplace. 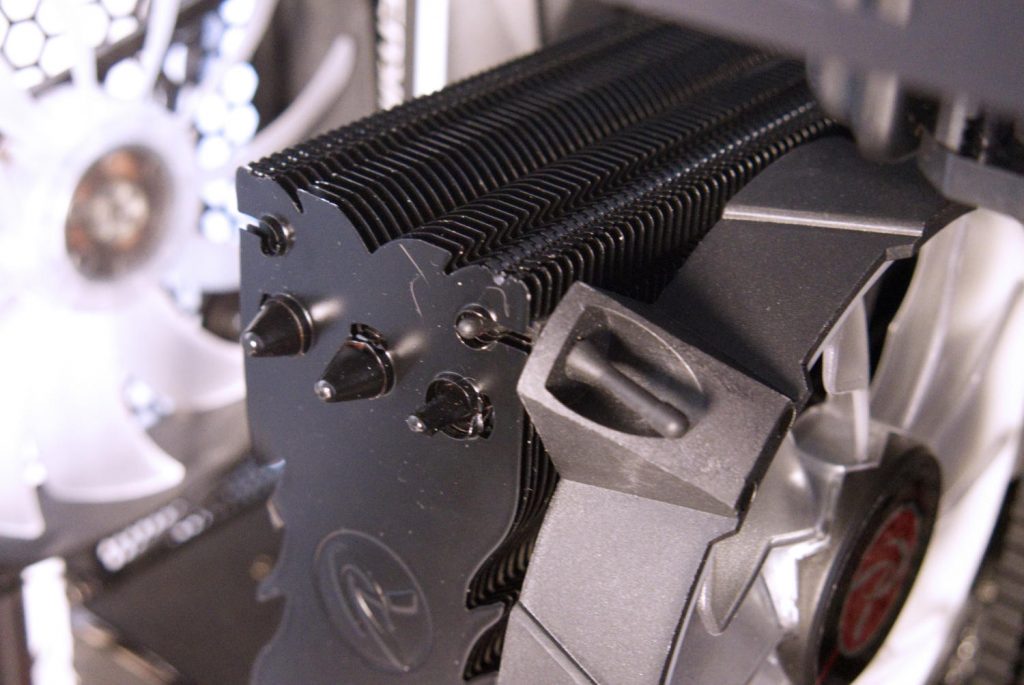 Unfortunately, I am unable to properly measure the sound output of CPU coolers using a digital sound meter. This is because my apartment has high ambient noise levels and I’m also not testing at the same time every day. Using a sound meter is, as such, not possible. I will endeavor to subjectively describe the sound output in a manner you may find useful. 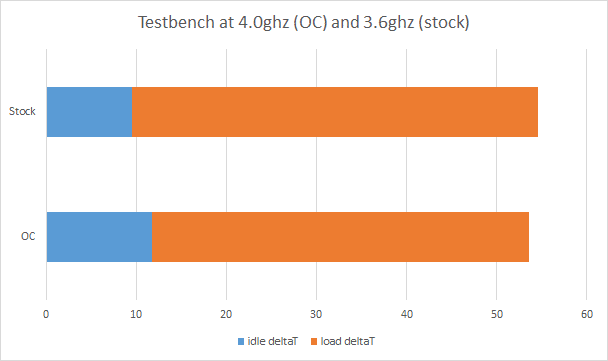 The Raijintek LETO performed admirably in our testing, with idle temps of delta T of 9.5c at idle and 11.8c at the overclocked settings. Under load, it came in with delta T of 45.1c at stock and 41.8c at the overclocked level. Note that this is perhaps different to what you’d expect, with a slightly higher temperature at load on the stock configuration. On the Ryzen 1800X, XFR can boost one core at a time to 4.1ghz, and that’s what explains the discrepancy to me. This is a good result on both and is well below the Tjmax of the Ryzen processors of 95c.

The fan that Raijintek has included with the LETO is one of the quietest I’ve personally used. Even at 100% speed, I could barely tell it was running from a distance of 2ft. As most people have their PC case at this distance or further, I can safely say that most users won’t be disturbed by the noise. 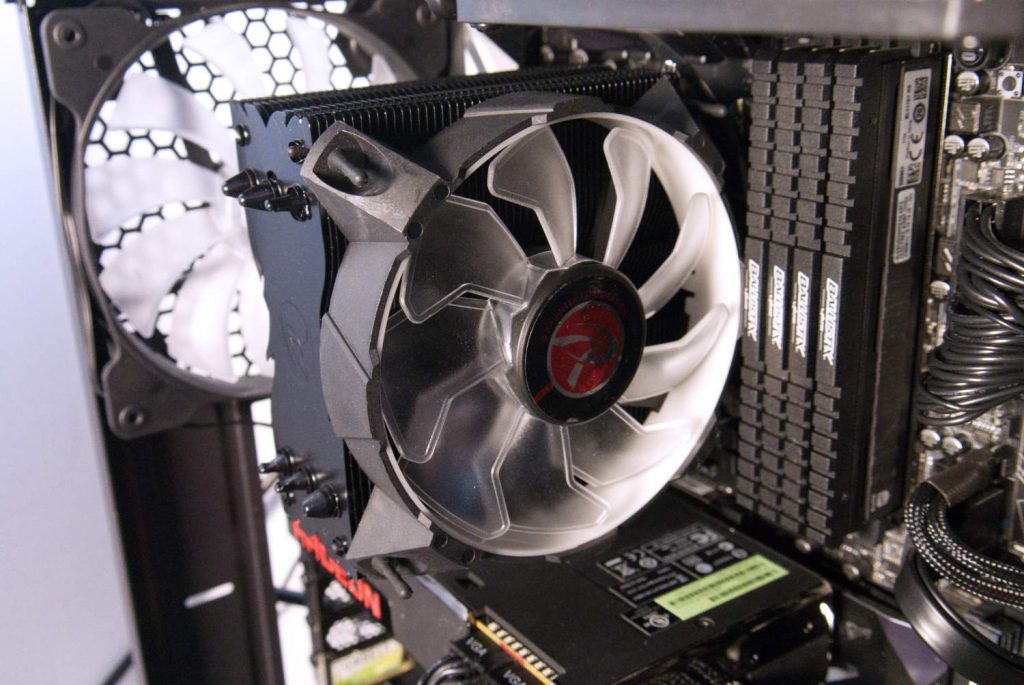 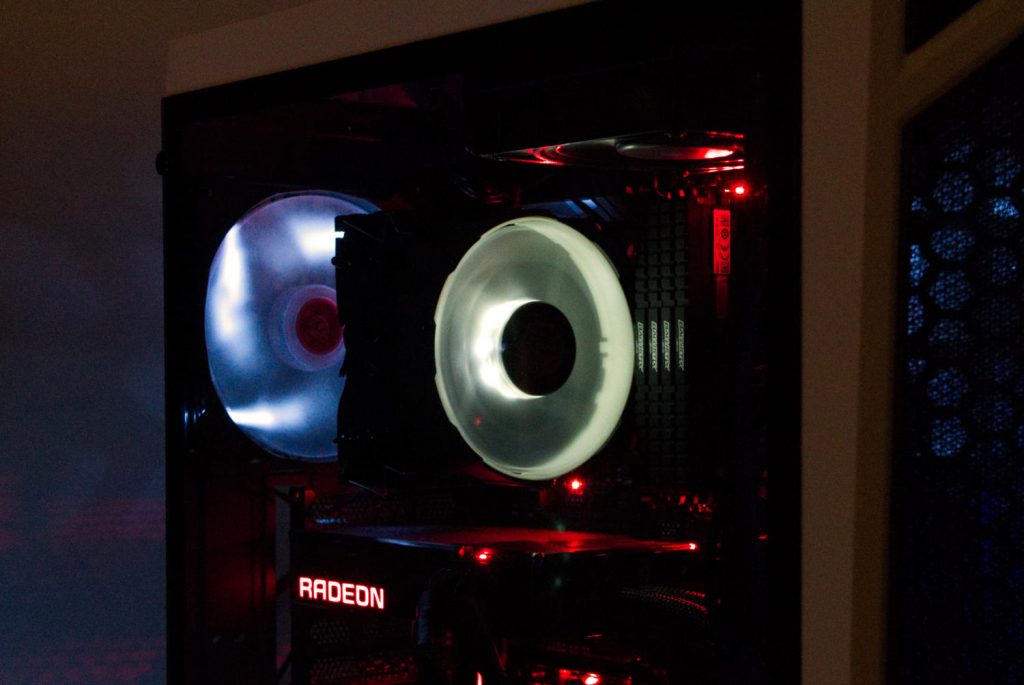 With a couple of minor caveats, Raijintek has a winner on their hands here. Gone are the days when ‘budget’ was a bad word, and the LETO aptly demonstrates this. Good performance overall, and a price point that few coolers on the market can match. If you bought a CPU without a cooler included, or if you want to trade up from the ‘just-enough’ stock coolers that some CPUs come with – the Raijintek LETO is definitely a viable option.