Who said home security systems need to be expensive? 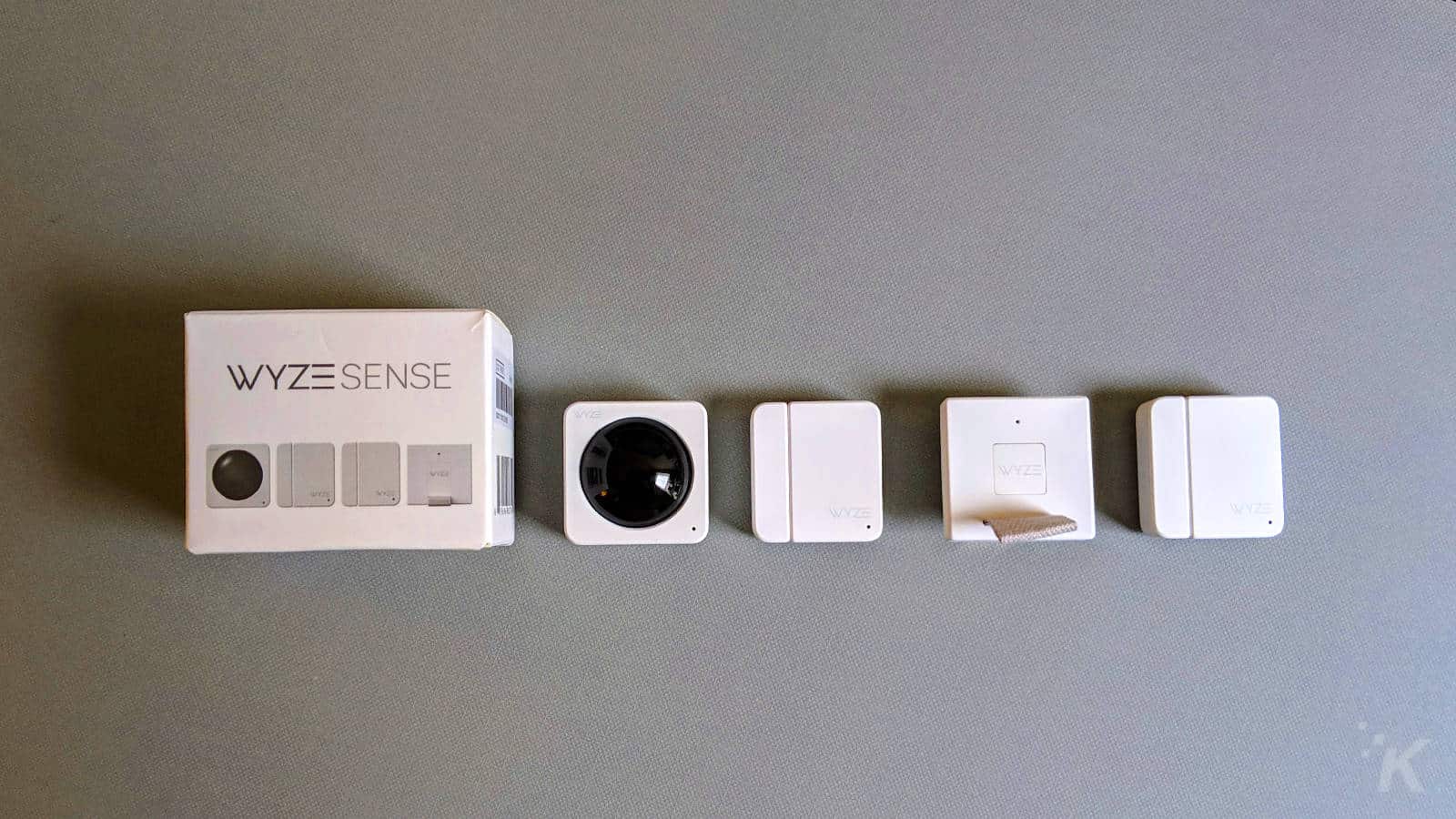 Image: Joe Rice-Jones / KnowTechie
The Good
$20!! Seriously...
Who needs wired security systems anymore?
Did I forget to mention that the kit is only $20?
Unobtrusive sensors
The Bad
Probably not weatherproof
It's this or a steak and this won
9.3
Overall

Wyze has made a bit of a name for themselves with their uber-affordable security cams, like the Wyze 2.0 we looked at last year.

One thing that left me scratching my head was the USB-A port on the back. I mean, there was a vague recollection of “for future use” but what, exactly? I mean the Wyze cams are all managed over-the-air, via the smartphone apps. What could Wyze be planning that would actually plug into that port? Well, now we know. It’s the Wyze Bridge, from the $20 Wyze Sense kit, which brings motion and contact sensors to the Wyze ecosystem.

Let’s just take a second to take that in. A motion sensor, two contact sensors, and the hub to connect them together – for $20. I don’t know if you’ve looked at home security gear prices recently but that $20 price tag is insanely good. So, with that price, are the sensors any good?

These things are tiny. Seriously. The box for the whole kit is about a quarter of the size of the Wyze Cam box. Thanks to a LEGO minifig you can see just how tiny the sensors that came out of that box were. The Wyze Bridge is about the size of a Bluetooth tracker, with a USB plug on the back.

The sensors are around the same size, although the motion detector is a few times thicker due to the domed sensor. The Wyze Bridge plugs into the back of a Wyze Cam and provides a link for up to 100 sensors. Wyze say that the Bridge should be able to cover most homes, but you can always add additional Bridges to the network.

The motion sensor uses a downward-facing Passive Infrared Light detector to see heat sources, so it won’t be triggered by shadows, insects, or inanimate objects. The contact sensors are just that, with a magnet on one half that is detected by the other side. I found it’s accurate even over a fairly large gap, due to the strength of the magnet used.

Both sensors use foam-backed adhesive to mount to whatever surface they’re placed on. If you don’t like the idea of them becoming permanent features, try using 3M command strips, or similar, to mount them instead.

I sense a disturbance in my house…

The contact sensors can be set to detect events of opening or closing whatever they are mounted on, or even to monitor if the door etc has been left open. Both sensor types can also be set to start your Wyze Cam recording once triggered, making it more likely that you’ll capture footage of an intruder. With Wyze’s footage being backed up to the cloud automatically, you don’t have to worry about the local storage being taken.

Once mounted, connecting the sensors to your Wyze Cam is super easy. Start the pairing in the app, by going to Add Product. Choose the type of sensor, which puts the Bridge into pairing mode. Then there’s a tiny reset hole on the side of the sensor, which you push for three seconds with the little tool Wyze includes. That syncs the sensor to your Wyze account, and lets you manage the sensor from the app.

Once connected, you don’t even need the Bridge to use the sensors anymore – they’ll still be able to trigger any Wyze Cam you have on your account.

The app will show things like the current state of the sensor, the history of events tracked by it, and also any video clips recorded after the sensor was triggered. Everything is laid out in an easy-to-use, uncluttered interface, which I really appreciate.

Do you already own a Wyze Cam? Do you want to set sensors around your home to alert you to potential trouble, like your kids opening the cookie jar at 2am? Do you have $20 in your wallet? Does a bear sh*t in the woods?

I mean, c’mon, it’s $20 for enough sensors to add security notifications to two doors, and one area of your home with the motion sensor. Add to that the frankly astonishing motion tracking of the Wyze cams, and triggered recordings based on those sensor readings and you’ve got a winner.

It’s not going to call the cops or private security for you, but by the time they show up they’re useless anyway, and you’re not paying for a hefty service contract. Use that saved money to take the family out for a meal, or just replace the mysteriously vanishing cookie stash.

I can think of hundreds of amusing locations to put these around my house, which probably means I need a few more kits…

The Good
$20!! Seriously...
Who needs wired security systems anymore?
Did I forget to mention that the kit is only $20?
Unobtrusive sensors
The Bad
Probably not weatherproof
It's this or a steak and this won
9.3
Overall
Related TopicsReviewssecuritytechWyzewyze camWyze Sense