Review: Void Tyrant is a middling mobile mashup of blackjack and fantasy RPGs

A decent deckbuilder for mobile.

Image: Void Tyrant
The Good
Crisp interface and visual design
Mechanics that are relatively new to mobile games
Fair and reasonable monetization, rare in the mobile space
The Bad
The most fundamental gameplay loop isn't that compelling
Playing this game makes me wish I was playing better games that are similar to it
6
Overall

Armor Games is both an indie game publisher and a web portal for browser-based games, not unlike Kongregate and Newgrounds. They’re responsible for ports of huge hits like Bloons TD and Kingdom Rush, so while I don’t frequently review mobile games here, I felt like I had to pay attention to their newest release, Void Tyrant, developed by Quite Fresh.

The premise for Void Tyrant is simple: You keep drawing cards from a deck of 30 (5 each of 1 through 6) until you stay or bust, trying to beat a computer opponent who’s doing the same. Once you both stay or one of you busts, whoever has the higher number (up to a maximum of 12) attacks a number of times equal to the difference. For example, if I stay at 11 and the computer stays at 9, my character will attack twice, dealing damage based on my fantasy-themed equipment and the enemy’s stats.

You also have a persistent energy gauge, an ability mana pool of sorts, that you can use to play cards from your hand to buff yourself, equip items, or do things to your opponent. All of this takes place in discrete runs, so you start from scratch over and over again, try to reach the end, and buy permanent upgrades like new starting gear or character classes when you end a run.

If you played Slay the Spire or read my glowing review of it, there’s a lot of shared DNA between that and Void Tyrant. 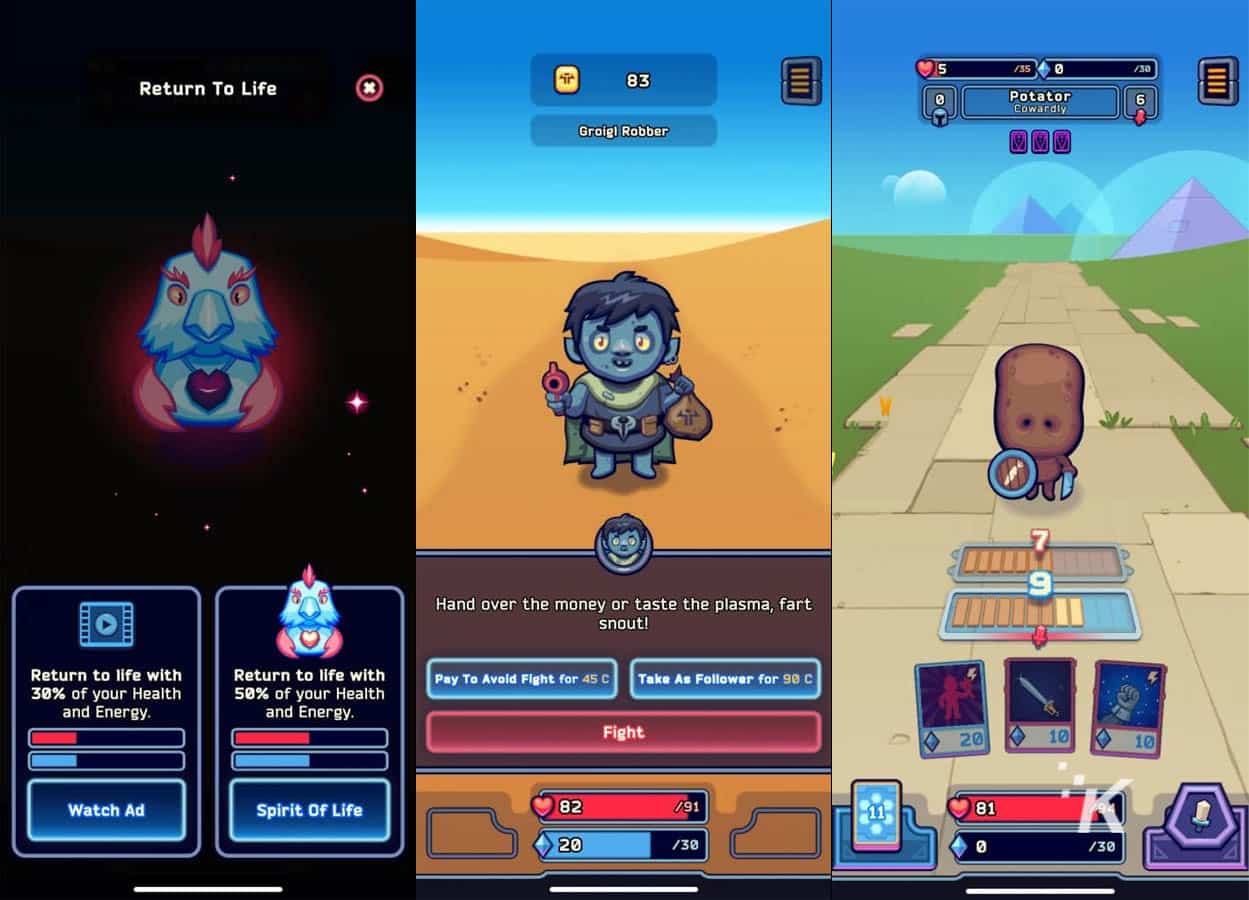 There’s a pretty formulaic way to play with very few interesting decisions, all of which gets even more whittled down if you can count cards, which you can totally do here in Void Tyrant if you’re the card counting sort (which I am not). There’s also no failsafe here, however; if you can’t count cards, you also can’t check your discard, for instance, to make decisions based on what you have left in your deck.

This leaves a weird mastery gap where only card counters can play optimally. When that’s the core gameplay loop, it’s hard to get excited when anything is added to it, like new equipment, abilities, or enemy types, of which there are admittedly plenty. At its core, the game is fundamentally just “what if blackjack, but with monsters” and there are only so many places that can go.

Still, Void Tyrant is free to play and available on your phone, neither of which is true for Slay the Spire, so it’s hard to make a direct comparison. If you’re looking for that roguelike deckbuilder experience on mobile, there’s definitely some of that to chew on here. Maybe you’ll even enjoy the blackjack-based gameplay more than I did.

Even so, with such strong showings in the past from Armor Games, I guess I expected more. Void Tyrant isn’t a bad game and it’s both clever and satisfying at times, but it just didn’t mesh with me very well and I never left any of my sessions feeling excited about the game. You might find some joy here, it’s just not for me.

Oh, and if you do play, you should know that the monetization in this game is great for a mobile title

You can access a watered-down version of the game’s bonus spirits (more treasure during runs, better starting loot, and a single-use revive when you die) by watching ads, but you can permanently unlock all three bonus spirits and make the game totally ad-free for $4.99. You also don’t have to ever watch ads or buy anything, but the game will definitely be much harder if you go that route.

You should check out Void Tyrant if you’re looking for a quick, simple roguelike for your phone. If you have access to anything that can play Slay the Spire, you should 100% play that instead.

Jake reviewed Void Tyrant on iOS, where it is now available. It is coming soon to Android as well.

The Good
Crisp interface and visual design
Mechanics that are relatively new to mobile games
Fair and reasonable monetization, rare in the mobile space
The Bad
The most fundamental gameplay loop isn't that compelling
Playing this game makes me wish I was playing better games that are similar to it
6
Overall
Related TopicsGameTechieReviewsvoid tyrant