It’s pretty clear that it’s the biggest game of 2020 at this point. 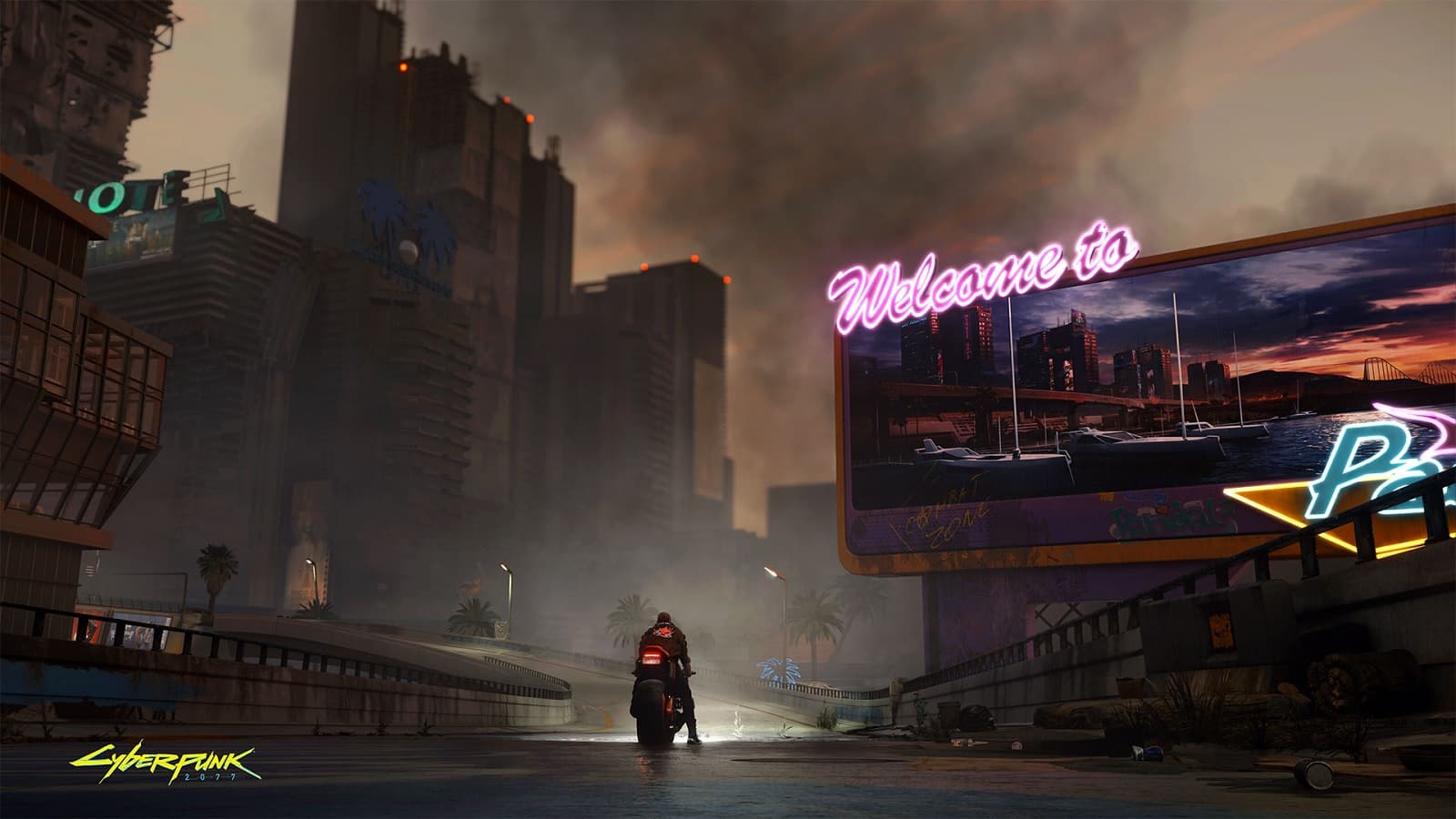 You are probably aware of this at this point: Cyberpunk 2077 is astonishing.

The 50-min demo we saw at E3 took place in a new area of Night City called Pacifica. If Night City is LA, Pacifica was supposed to be Santa Monica turned into Dubai, but it never got finished. Lush multi-story hotels are towering uncompleted in the distance, gigantic shopping mall looming over a pier with rollercoasters, currently occupied by a gang called Animals. Very Cyberpunk stuff indeed.

Our character named V (we were playing as a male protagonist this time, though the appearance is fully customizable) needs something from Animal’s rivals gang Voodoo Boys. You see, V has a biochip which might just hold a secret to immortality, we’ve been told, and our goal here to locate a legendary hacker who might shed some light on how the chip works. To do that we need to help Voodoo Boys to clear the mall and uncover why the Animals are guarding a suspicious-looking surveillance van inside the structure.

Once we receive the mission briefing, we are free to approach things in Cyberpunk 2077 any way we like it

Our character borrows a cool-looking motorbike and rides towards the shopping mall while we’re being reminded that there are no loading screens in the game unless you use fast travel. The driving looks smooth and responsive, and there’s a plentiful of cyberpunk radio stations to choose from to enjoy along the ride.

When we arrive, it’s sunset – and what a beautiful sunset it is, with light and shadow looking exceptionally good in this detail-rich and handcrafted world. Two Voodoo boys gang members are waiting for us in front of the mall. They’re not very eager to help us – so it’s up to us to choose our approach.

There are different entrances to the mall, and we can play either stealthily or all guns blazing. We select a third approach: since our character is Net Runner, we hack into the Mall’s security system, disable the cameras and then take care of some Animal gang members by quietly slicing their throats with a mean-looking laser string. “You can complete an entire game without killing anyone,” notes CD Project RED’s dev while V disposes of the bodies in the multi-story trash system of the Mall.

For the sake of the demo, we’re switching to another character build which is a female melee fighter

There are no classes in Cyberpunk 2077, so you should be able to shape your character any way you want across different attributes (one of which is called “Cool,” although I’m unsure what it does). Still, some actions and dialog options require specific skills to be ramped up.

Being a melee fighter, we can now smash through locked doors with our advanced cyber-prosthetics, killing enemies with powerful melee kills, and even ripping turrets off its base to lay chaos around the mall. The gunplay looks better than most RPGs like Fallout 4 or Deus Ex: Mankind Divided, but not quite on a Destiny level, though we didn’t get to play the game, so that’s just a ballpark impression. We finish off the gang leader boss by smashing her head with her own hammer. Surprisingly, she’s still breathing, and we can spare her after the fight is over, which will have consequences down the road.

Once we hacked the security van, one thing becomes clear: the Animals were hired by a Shadownet agent, who we find in the mall’s cinema watching some old-school Western movie. The Voodoo boys were using us, he explains, and they will be quick to dispose of us after the job is done.

We can believe him and help him to locate the gang members, or we can neutralize him and continue with our mission to figure out the rival gang’s plans. We choose to stay loyal to Voodoo Boys, connect ourselves to the agent’s network… and he was right: the Voodoo Boys have fried the whole system, and we’re supposed to be dead. But we’re not: probably thanks to that biochip in our head. So now we get to confront the Voodoo Boyz’ leader, Bridgette and get ourselves some answers.

She agrees to help us to find that mysterious hacker we’re after, and then, we’re entering cyberspace with her. The cyberspace is all ones and zeroes, and it looks like a proper old-school virtual reality rather than The Matrix. There’s a “black wall” in the cyberspace, and no one ever came back after venturing trough there, we’ve been told. So, naturally, we try to go through, and our demo ends, putting an end to the 50 brilliant minutes spent in Cyberpunk 2077.

It’s pretty clear that it’s the biggest game of 2020 at this point, probably the biggest cyberpunk game of all time, and the best RPG game world we’ve seen to date. Oh, and it also has Keanu Reeves’ character following you around in a ghost-like form, because why not. It’s so astonishing and full of grandeur that even thinking about all the time we will be spending in this game makes me feel good. April 2020 is not far away, and it will very much be worth the wait.

What do you think? Ready for Cyberpunk 2077? Let us know down below in the comments or carry the discussion over to our Twitter or Facebook.