Everything you need to know about Google One: What is it? How much does membership cost?

If you need more from your Google experience, Google One might be for you.

As Google users prepare to see their photos take up their previous free storage on their basic Google account, now is the time to consider getting Google One. But what is it?

Launched back in Spring 2018, Google One is effectively the tech giant’s version of Dropbox. However, to meet with the upgrades made to mobile technology such as 4K video and high-resolution photography, Google decided to offer a paid subscription for more storage and switch its paid consumer Google Drive accounts to Google One.

It also incorporated Drive and Gmail into using the same storage, ranging from 100GB to 30TB—depending on the subscription plan. Members also got access to experts for help with all Google products and services, as well as gained extras such as credits on Google Play or deals on select hotels found in Google Search.

For anyone that owns a Google Pixel 4, they get one month free of Google One.

What does Google One include?

Google One has a few benefits for those who love to capture the world around them. Photos and videos are kept in full resolution, meaning there’s no need to compress files. While photos and videos currently do not count towards Google Account free storage, it will from June 2021.

Google also says its cloud is protected by industry-leading security so Google One members should have nothing to worry about when it comes to their files.

Google One memberships also come with some great benefits. Members can get up to 10% back in store credit when they buy devices and accessories on the Google Store. Members can also enjoy exclusive discounts on hotels booked through Google—they just need to look for the Google One Member Prices when searching.

Users can invite up to five additional family members to their plan and simplify storage for everyone. Family members get their own space to store personal files, emails, and photos, as well as getting the benefits of Google One.

For those who have a personal Google Account, they can switch easily to a Google One membership. It is not available for G Suite users, however.

After launching automatic backup for Google One members in 2019, the company brought the service to anyone that could get the Google membership. Phone backup and storage manager are now free for Google users wherever Google One is available. Whether users have an Android or iOS device, they can back up their phone by downloading the Google One app. A dedicated app for iOS is reportedly coming soon, according to Mac Rumors. 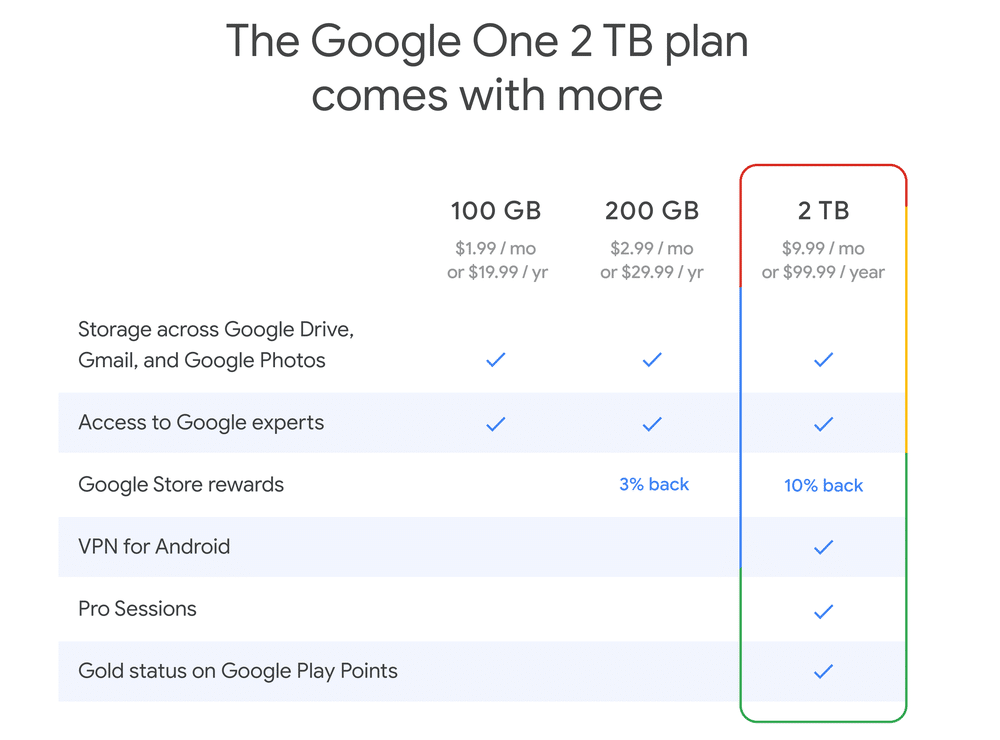 Price plan for Google One Membership.

iPhones can also now store photos, videos, contacts, and calendar events with Google, using up to 15GB of free storage that comes with a Google account. The storage manager also helps users keep their stuff organized and free up space.

In 2020, Google One paid members also got access to the new VPN by Google One. Those who are on the 2TB and higher plans can have additional protection while they’re online for their Android phone. The VPN is built into the Google One app, so with just one tap users can browse online knowing their data is safe.

How much is the Google One membership?

This is probably one of the most key questions potential members are asking. There are different tiers of membership including different storage spaces. Plans start from $1.99 per month or $19.99 per year for 100GB of storage.

What do you think? Are you interested in Google One? Let us know down below in the comments or carry the discussion over to our Twitter or Facebook.