Gail.com is the greatest typo website you’ll ever stumble across

What started as a mistake has blossomed into something far, far more fascinating. 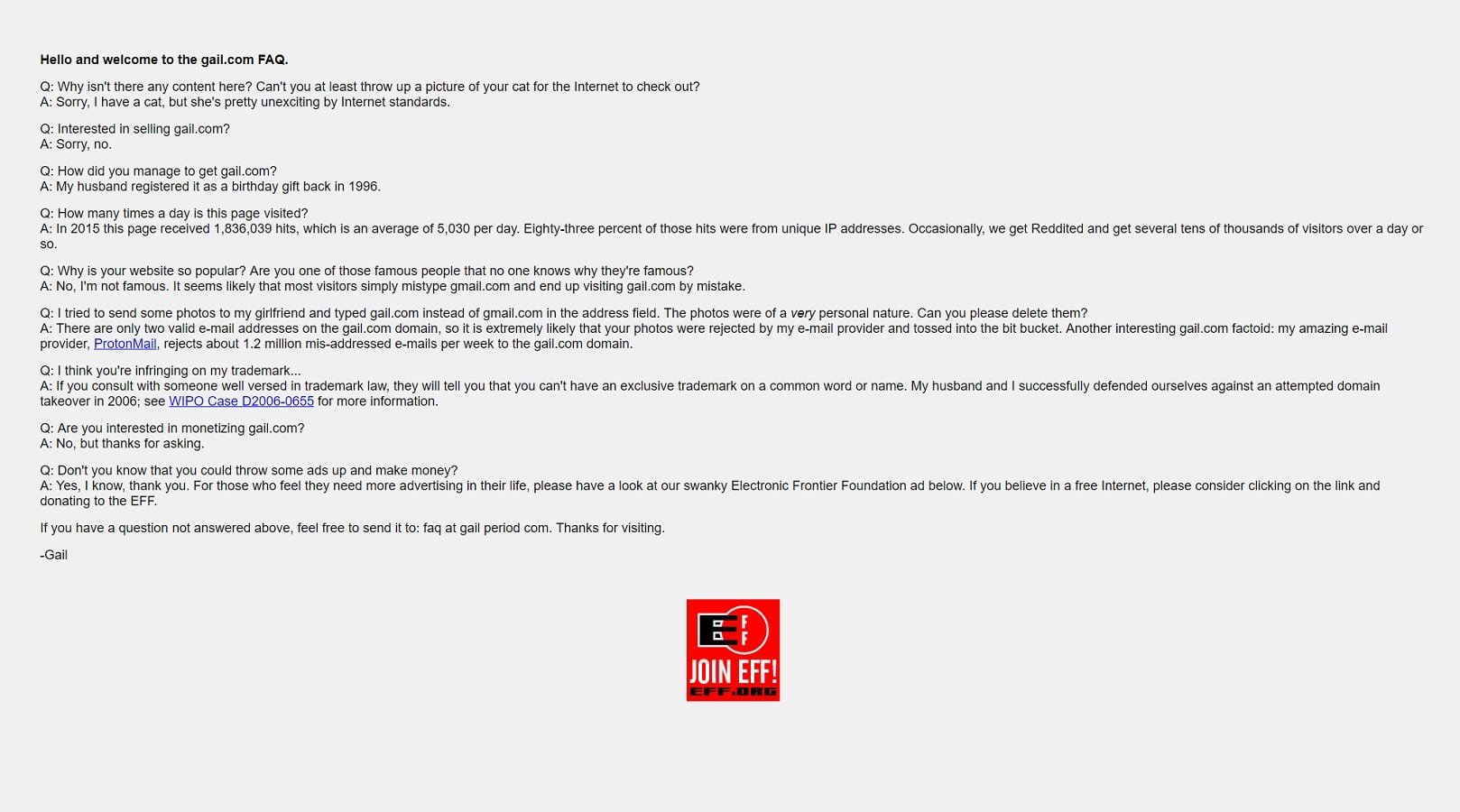 Mistakes – we all make ’em, amirite? Me, I like to traffic in mistakes of the misspelling variety. I’m talking typos, people. For a writer who spends most of his spare time playing guitar, I have surprisingly uncoordinated fingers when it comes to a keyboard or mobile device. It took me 5 attempts to text the word “unclear” correctly this morning, which is kind of hilarious in a cruel, ironic way.

Anyways, yesterday morning I made the mistake of typing “gail.com” when I meant to type “gmail.com.” Only it wasn’t a mistake. It was a happy accident. It was the perhaps greatest happy accident I’ve ever made.

You see, unlike most “one letter off” sites, gail.com doesn’t just redirect you to gmail.com, nor does it lead you to an empty/unpurchased domain. Gail.com leads you to this:

Oh, Gail. I have so many questions, but we’ll get to those in a second

As you might have garnered from the screengrab above, gail.com is apparently a site that was purchased in 1996 as a birthday gift by the husband of a woman presumably named Gail. The site received almost 2 million hits in 2015 alone and currently rejects “about 1.2 million mis-addressed [sic] emails a week.”

Despite what I can only imagine is constant, never-ending pressure from Google, Gail has never yielded her domain – in fact, she’s never even run an advertisement on it (aside from an adorably anachronistic logo for the Electronic Frontier Foundation). Gail and her husband even defended the site against an attempted domain takeover in 2006, so advertisers, don’t even come at Gail because I can ASSURE you that you don’t want none of that smoke.

Gail isn’t interested in our money, and it’s hard to not think that she’s a better person than most of us because of it. As such, Gail.com might just be one of the last remaining, truly pure places on the entire Internet. It’s the Richard Splett of websites.

Ok, now to MY QUESTIONS FOR GAIL.

Gail and Larry are real ones. Leave your praise in the comments or carry the discussion over to our Twitter or Facebook.