How to choose drives for your home NAS

If you’ve decided that your current PC storage solution isn’t working for you, maybe it’s time to look into a NAS (Network Attached Storage) device. That means you’ll be storing most of your data and backups on a centralized device on your network. The bonus to this? You’ll be able to access it from any device on your network, not just the one the hard drives are installed in.

You’ll be looking for high-capacity hard drives to store that data on, but not every drive is suitable. Here’s what you need to know before you go shopping.

See, when you install a hard drive into your PC, that drive might only be accessed occasionally. NAS drives can be constantly accessed by the devices on your network, meaning they need to be built to handle the increased workload. While everyone used to use desktop drives in their NAS devices, storage manufacturers have started coming up with purpose-built drives that are up to the task.

These new drives have better vibration tolerance, produce less heat, and sometimes come filled with exotic gases to reduce drag, leading to decreased energy use. They also come with specialized firmware that is written specifically for use in RAID arrays, a common way to provide data redundancy in NAS devices and servers.

Unlike desktop drives, which you only need to worry about capacity, speed and performance; when you’re shopping for NAS ones you need to consider workload rates, thermal control, and vibration tolerance, Mean Time Between Failures (MTBF), and also any additional add-ons that the manufacturer gives you for the higher cost, such as data recovery services.

A perfect example is the Seagate IronWolf Pro range of NAS internal hard drives, which Seagate developed in partnership with the leading NAS manufacturers. Now, these drives aren’t cheap, with the 14TB models I’m using coming in at $430 each currently ($600 at release). For that cash, you get NAS-specific features, additional warranty, and even data recovery options, in hard drives designed for 24/7 operation.

Our other pick is the WD Red range of NAS specific drives. These counterparts from WD are built to work with NAS enclosures with one to eight bays, have extended workload rates, and won’t break the bank. 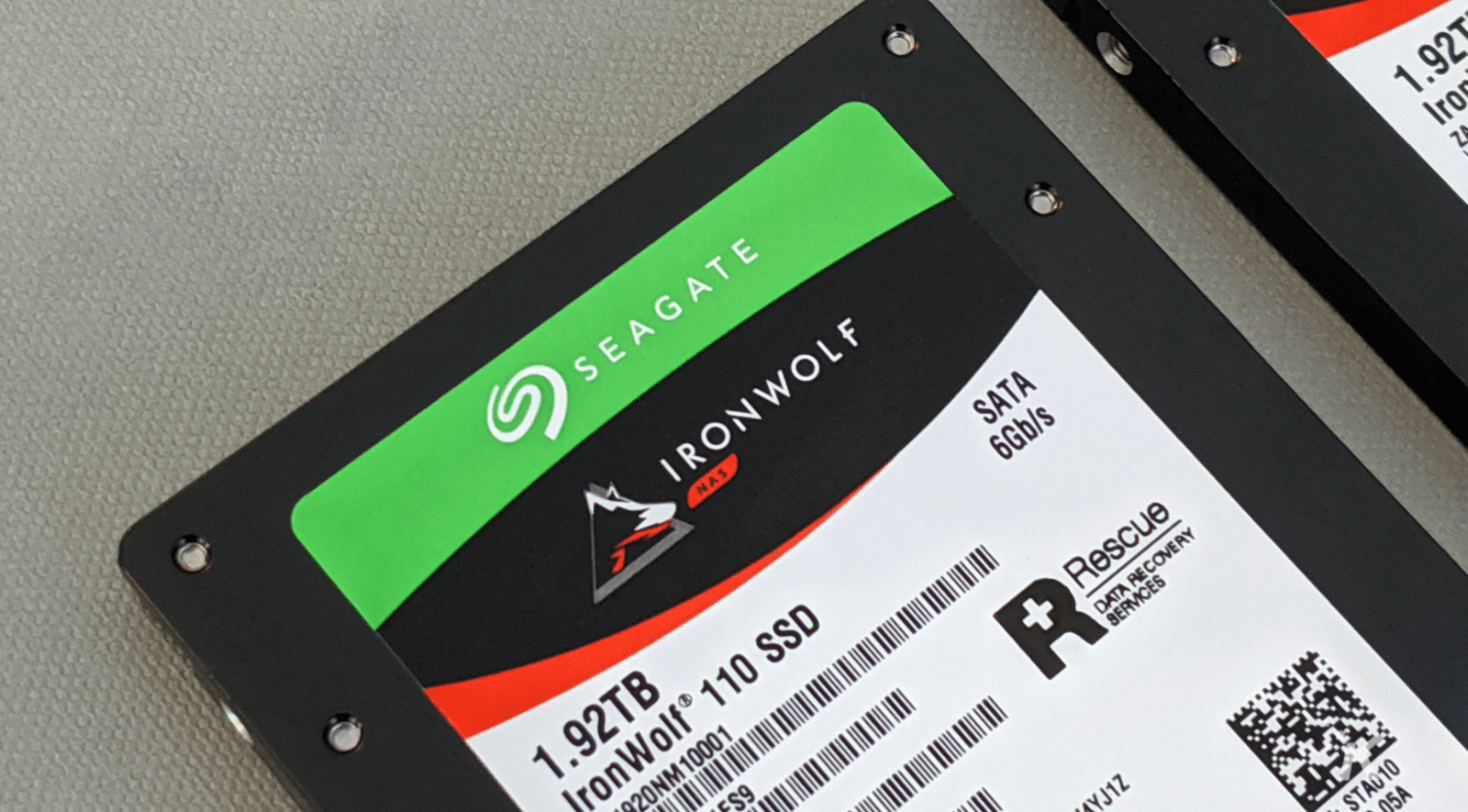 If spinny drives aren’t enough for your application, you can always upgrade to NAS-centric SSDs, like the IronWolf 110 SSD, also from Seagate. You can get these in a higher capacity than desktop SSDs, all the way up to 3.84 TB of storage each. That’s a lot of Office documents! NAS SSDs are built for reliability, with a two million MTBF (mean time between failures), and features like lossless data reduction, power loss data protection and more.

There’s also the newly-released Seagate IronWolf 510 SSD, which comes in the M.2 PCIe form factor. Expect blazing speeds from this little one, but you’ll pay for it – the 1.92TB model is $520. You’ll get 1.8M MTBF for that cash though, five year warranty and a two year data rescue plan.

If your NAS supports it, you can use the SSD as a cache to store frequently-accessed data so you don’t run into bottlenecks. Expect to pay for the extra speed though, with the 1.92 TB versions I’m using running at $385 currently. You do get a five-year warranty and two-year data recovery service plan for that cash though, which is some nice peace of mind.

You can get a rough feel for reliability from the annual hard drive stats Backblaze publishes, but keep in mind that they use the Enterprise versions of any drives and not the desktop or NAS specific ones. Whichever drives you do choose for your NAS, make sure you use one of the RAID modes that provide redundancy so if one drive does fail, you don’t lose all your precious data.

What do you think? Did this guide help? Let us know down below in the comments or carry the discussion over to our Twitter or Facebook.