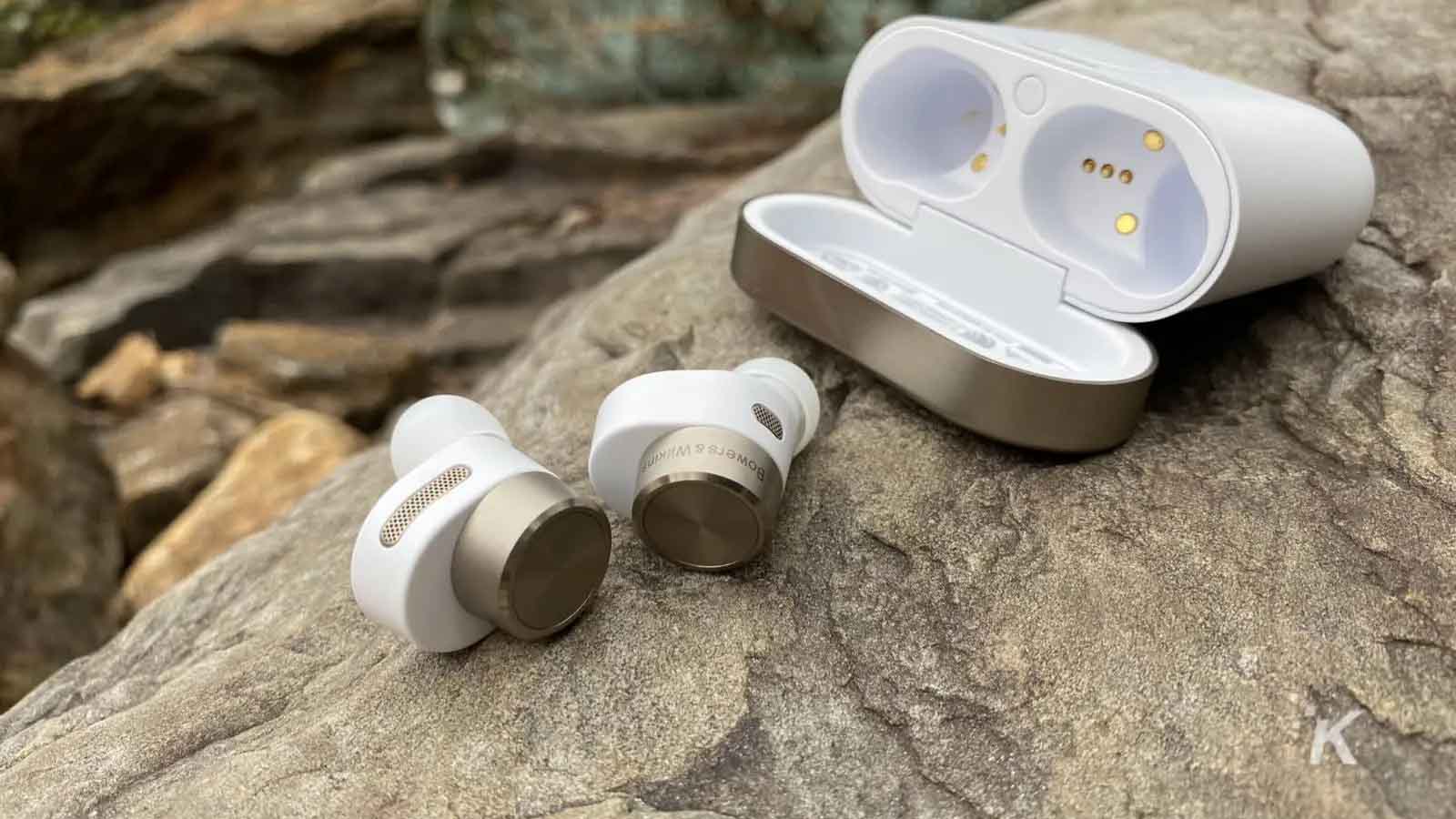 We first wrote about Bowers & Wilkins’ PI7 earbuds half a year ago and we were instantly intrigued by the charging case, which doubled up as a Bluetooth transmitter, turning any device into a wireless audio streamer. Now they’re on our desk to review, and we’re excited.

We loved Bowers & Wilkins over-ears, the PX7 Carbon, barely wanting to remove them to sleep. Would that be the same with the PI7?

How will Bowers & Wilkins’ pedigree of premium sound translate to its first true wireless earbuds? Will the Bluetooth streaming case be merely a gimmick, or is it worth the price increase over the PI5? Let’s find out.

So, what are they all about?

Bowers & Wilkins’ first pair of true wireless headphones is a spec-heavy entry into the crowded market, with one significant feature that helps them differentiate from the competition. That’s the carrying case, which, when plugged into either a USB device or one with a 3.5mm jack, turns the case into a Bluetooth transmitter.

That means you can use the PI7 with devices that don’t have Bluetooth, or things like in-flight entertainment systems.

That might be worth the high price on its own, but Bowers & Wilkins hasn’t stopped there. Each earbud has two drivers providing the sound, a 9.2mm custom driver and a balanced armature to fill in the higher frequencies. Each of the four total drivers has its own amplifier as well, which should mean less chance of distortion.

The PI7 supports aptX Adaptive Bluetooth, at up to 24-bit/48kHz, from a Bluetooth 5.0 connection. Each earpiece has three microphones, which handle voice assistant duties (Siri or Google Assistant, no Alexa yet), voice calls, and also for tweaking the active noise cancellation (ANC) tech.

The buds themselves are rated to IP54 but don’t put the case anywhere near water. The buds also have touch-capacitive controls on the metal exterior parts, for play/pause, skipping tracks, voice assistant, and switching through ANC modes. A lack of volume control here is annoying, but not a deal-breaker as the rest of the controls are responsive.

The Bowers & Wilkins Headphones app (Android and iOS) lets you see battery levels, along with more granular controls for ANC and ambient pass-through. You can also set the buds to turn off when taken out of your ears, which is handy for battery life.

The app also has six “soundspaces” which are ambient noise generators for meditation use or similar. What’s missing? A way to EQ the sound signature of the PI7, which is a standard feature for high-end TWS buds.

Battery life is rated at four hours before needing a recharge, but we found it was often short of that rating. There are another four charges in the carrying case, so a total of 20 rated hours before you need to find a plug socket or a Qi-capable charging mat.

So, how do they sound?

I tested the PI7’s on an iPhone 11 Pro, with various hi-res audio sources like Amazon Music and Qobuz. The biggest thing I took away from my testing is that the sound signature Bowers & Wilkins has created from the two drivers in each earbud of the PI7’s is rich, detailed, and among the best that we’ve tested.

That’s perhaps to be expected from a pair of TWS earbuds that cost more than most of the market, but nobody ever accused Bowers & Wilkins of being cheap.

Pink Floyd’s The Wall in 96kHz on Qobuz was a multi-layered journey through some of my favorite rock tracks, with every single instrument kept separated in space. That’s a hard task for some speaker setups so kudos to Bowers & Wilkins for their efforts in tuning. That sound signature doesn’t change much if ANC is turned on, with the only real effect I could notice was some muting of drum snare hits and the soundstage becoming more intimate.

The stellar sound is let down by the connectivity issues we experienced. Those included minor dropouts of sound, usually on one ear and not both, and one time the Bowers & Wilkins headphones app could connect to the PI7’s but our iPhone couldn’t, so we could change ANC settings but not hear any music.

That required us to remove the PI7 from the app, perform a factory reset of the earbuds+case, then re-add the PI7 to the iPhone’s Bluetooth list before adding it back to the app.

Slightly convoluted for sure, but it’s good that Bowers & Wilkins has a dedicated factory reset function that doesn’t require complicated button sequences, like some TWS earbuds we’ve experienced.

So, should I buy them?

For $399, the Bowers & Wilkins PI7 are almost in a price class of their own. A not-insignificant part of that price is the novel retransmitting case, which is enough of a justification for the PI7 for any frequent flier, even if the ANC isn’t the best we’ve tested.

The sound is among the best TWS earbuds we’ve heard, with Bowers & Wilkins’ signature bass-heavy sound shining through. The dual-driver design sounds great even limited to AAC for the codec on iOS, but they’ll shine on an Android that supports Qualcomm’s aptX technology.

It’s just a shame that the sound was blemished by occasional dropouts, even though we’re used to Bluetooth 5.0 being rock solid.

If you want the same sound and style but don’t care for the retransmitting case, the PI5 is only $249 and probably the better value of the two.

I really want this LED floor lamp, and this $90 discount is almost irresistible

This Echo Dot with a built-in time display usually sells for $60. It’s down to just $35 right now