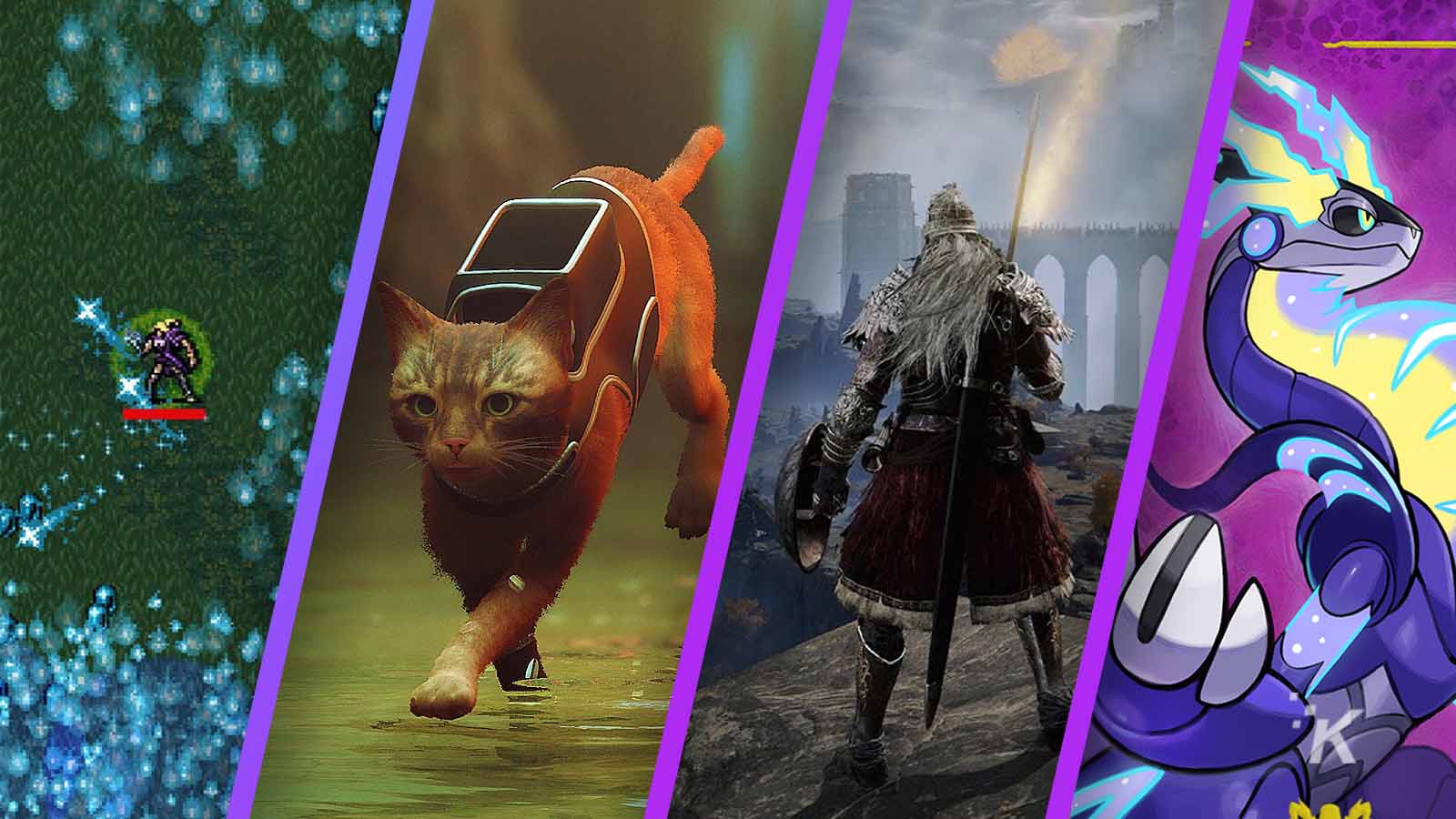 2022 is coming to a close, which means it’s time to look back at some of our favorite video games of the year.

The year was filled with blockbuster AAA releases that we sunk hours into. But plenty of older and indie games also made our rotation.

So, join us as we look back on some of our most played, favorite video games of 2022.

We played a ton of games this year, but some stood head-and-shoulders above the rest in terms of enjoyment and playtime.

Alex: Elden Ring was one of the year’s biggest names in gaming, and FromSoftware’s latest Soulslike lived well up to the hype.

I didn’t see my family for two weeks after this game came out. It was one of those RPGs that you can’t stop playing and can’t stop thinking about when you can’t play.

FromSoftware did an amazing job translating its Soulslike combat and story style to the open world in Elden Ring. This is a must-play for any RPG fans out there.

Josiah: The latest Pokémon game released to mixed reviews, but that hasn’t stopped it from being one of my most played games this year.

Performance issues marred the experience, but the story and open-world exploration have been a blast.

The new Terastallization feature is interesting, and I’m definitely excited to see how that factors into PvP.

Josiah: If you had told me I would be sinking my teeth into a Call of Duty game this year, I would have laughed. But here we are.

Modern Warfare II’s online multiplayer this year reached a sweet point for me, and the combination of action, maps, and time-to-kill really felt great.

Will I stick with the game through 2023? Doubtful, but it’s been a fun ride.

Josiah: Ok, listen. I know this game hit early access in 2021, but it didn’t officially release until 2022, so it counts.

Vampire Survivors is my surprise hit of the year, and I truly can’t praise it enough in this little text block. Addictive gameplay? Check. Polished roguelite? Check. Great way to kill 30 minutes? Double-check.

Seriously, do yourself a favor and check this out on Steam.

Alex: As someone who typically stays away from most mobile games, I’m surprised at how much I’ve been loving Marvel Snap (Android, iOS, and Steam).

Snap is a unique card game filled with tons of unique characters from the Marvel Universe. Beautiful artwork and unique mechanics make each battle different and exciting.

Alex: I revisited FIFA for the first time in a few years with FIFA 23, and I was pleasantly surprised by my experience. The gameplay and graphics have improved drastically over the years.

This was the first year on new-gen consoles for FIFA, introducing new speed mechanics to make matches more dynamic.

The Ultimate Team mode in FIFA 23 is outstanding, with constant events and a giant celebration for the 2022 World Cup. This is a much try for soccer or FIFA video game fans.

Alex: I know, I know. Hades came out more than two years ago, and I’m really late to the party. But this has quickly become one of my favorite games of the year.

I picked up Hades during a Steam sale shortly after the revelation of Hades 2 at the Game Awards 2022. The original truly is one of the best dungeon crawlers I’ve ever picked up.

Death is a huge part of Hades, teaching you more and more about the game each time you fail. Plus, no run is ever the same, with unique weapons and boons that give you the power to create your own chaos.

Kevin: If you don’t like a game about cats, then fuck you.

Stray is a game that you play as a cat. Simple as that. You do cat things like pushing stuff off a counter, meowing on command, and all the other silly shit cats do.

I mean, who wouldn’t want to live out their feline fantasy and pretend to be a cat for a while? Well, Stray is that game, and you’ll be meowing your way through this immersive yet surprising storyline.

Kevin: Alright, before you give me any shit: I know this game came out in 2021. But when you run a news website, time isn’t necessarily on your side.

With that said, Deathloop is such a fun-ass game. This game came out of left field. Sure, we covered it and wrote about the game extensively, but it’s a whole different experience when you actually play it.

Everything about this game is 🔥. From the music and weapons to the fact that you have three lives to figure your shit out – that’s pretty neat. If you haven’t played it, get on it.

Obviously, there are a ton of other games that released this year that deserve mentioning, even if we didn’t get around to playing them.

Obviously, God of War Ragnarok deserves to be mentioned here. The sequel to the hit 2018 God of War game, Ragnarok features a great storyline and the gameplay to back it up.

On the Nintendo front, Xenoblade Chronicles 3 rocked gamers this year and is definitely worth checking out if you are a JRPG fan.

With 2022 coming to a close, it’s time to look forward to a new year of gaming. 2023 has a ton of potential, with games like Dead Island 2 and Resident Evil 4 Remake expected to release.

Strategy fans have Fire Emblem Engage to look forward to. And there’s sure to be a new Call of Duty to dive into for fans of first-person shooter games.

Just a heads up, if you buy any of the games through our links, we may get a small share of the sale. It’s one of the ways we keep the lights on here. Click here for more.