It’s really a shame that Robot Entertainment created Orcs Must Die so many years ago, cause that would have been the perfect name for Extinction. 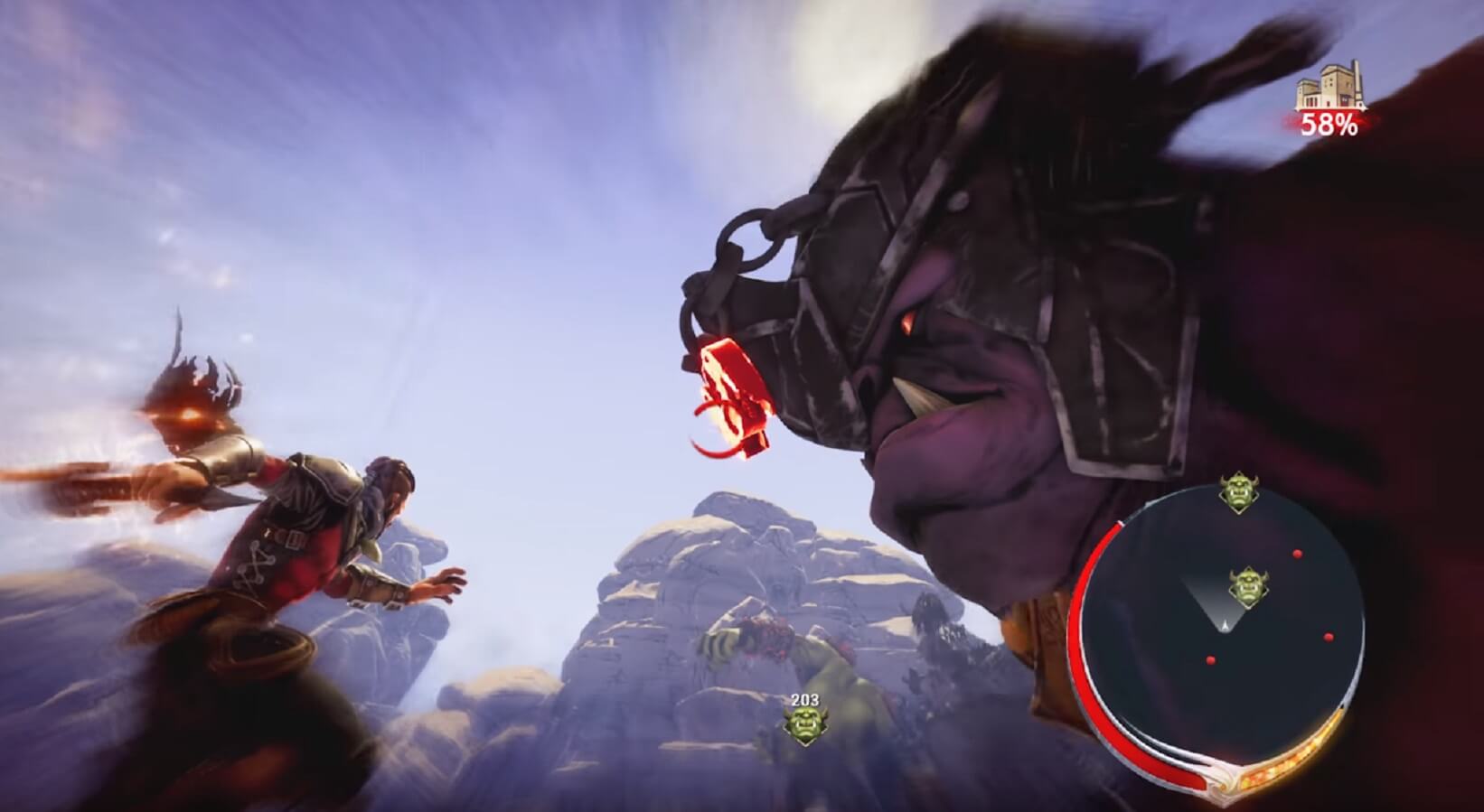 Extinction is a game that was first shown to me at E3 2017, and from their description, it was an extremely early alpha build of the game and wasn’t in any way finished or ready for production. In fact, all we got to do was watch a trailer and a few moments of a guy running around fighting stuff. It was short but to the point, and the game looked like a tasty tidbit of promise and excitement. Fast forward six months and Extinction is finally here for public consumption.

Guess what? It’s the same thing we saw at E3 – with no visible changes.

Extinction is, for lack of a better word, a game that’s bite-sized enough to make it attractive to mobile platforms – yet too unknown to thrive there. With advanced credit from publisher Iron Galaxy’s work in the Fighting Game community, Extinction shows off a very competent base game that never actually becomes anything. The mechanics are there, and the combat is smooth and quick – but it lacks any real depth or weight. A normal slash feels just as powerful as one of the advanced combos, and quite honestly you can mostly skip any sort of combat with the lesser enemies in favor of quickly maxing out your portal capturing ability for quick kill strike meter filling.

There’s a bunch of other skills that you can purchase with coins earned from in-game objective completion (or you can obviously just buy coin packs for real money) though most of the skills seem fairly pointless or lack any real substance. The best of the best being to max out portal capture and rune energy which allows you to keep your kill strike bar partially charged at all times.

There are two real types of enemies in Extinction: There are smaller enemies and slightly stronger versions of those (denoted by the fact that they’re blue where the normies are green), and then the giant armored things that have a few different types of armor. The first Ravenii show up with wooden armor that can easily be destroyed by a single rune strike, while the armor progressively becomes stronger as they get harder. Wood upgrades to Iron (which has a single lock that must be struck twice to break off), which upgrades to Gold (held in place by two locks on each side), which upgrades to some weird voodoo ritual flaming skull shit that requires the Ravenii take a swing at you to extinguish the flame before you can break it, and finally an unbreakable armor which you’ll cheese by charging your kill strike and running up their leg to deliver an instant kill. Cool ideas for a starting grid, but ultimately feels like someone in a meeting room was like “eh, that’s good enough.”

It’s a an inspired game for sure – it borrows heavily from the concepts of the popular Anime (and decently successful video game) Attack on Titan complete with fighting off large monstrous Ravenii (basically Orcs/Ogres), while zipping from point to point with grappling hooks, and using momentum to propel yourself further as you chase down your targets. Extinction’s look borrows heavily from Ubisoft‘s Prince of Persia, with the almost watercolor looking environments, and the main character Avil who looks like Macklemore wearing Middle Eastern themed garb.

If there’s one thing Extinction does that I like more than any of the other elements, it’s the hand-drawn storyboard elements that tie the chapters together. Unfortunately, the story is about as interesting as reading the writing on the back of a fast-food takeout cup. There’s something about a group of soldiers called Sentinels and they do something or other and no one really cares cause it’s entirely forgettable. The voice acting is pretty low quality too, which makes it even more infuriating when you’re insta-killed by a Ravenii slap and shouted at by whatever the lady’s name is. She’s like “WHAT ARE YOU DOING?” and it’s everything you can muster not to yell back at the screen, “OBVIOUSLY I’M DYING, STFU.”

I’m not sure if Extinction suffers from a lack of creative decisions, it’s just a cash grab to fuel upcoming Iron Galaxy projects, or if they simply ran out of time, but Extinction is about 50% of a game stuffed into a full cost package. The story mode entirely consists of quick levels which give you a main objective (or sometimes multiple lesser objectives that lead up to completing a main objective) and this continues throughout the entirety of Extinction. There are online challenge modes which give you randomized tasks, assigned by pressing a button to stop a rolling slot machine type of objective picker – but this is also prevalent in the story mode, as well, which further increases how lazy Extinction appears as a package deal.

Make no mistake about it: Extinction, when it works, is a pretty fun game. Combat is fluid and quick, using your rune dashes to break armor pieces, unlock shackles, and severed body parts is satisfying, but it simply never comes together like one would expect. The movement is decently designed, though the areas which you can grapple too aren’t consistent, and you’ll often propel yourself forward to try and grapple an anchor point in the distance, only for Avil to fling himself to another anchor off to the side and not only ruin your momentum, but disorient your placement on the map. These slip-ups take a few moments to shake that off, realign, and continue moving – especially when you’re already under a time limit and breaks the intensity that would otherwise feel satisfying. Add wonky camera issues to the mix and more often than not Extinction turns from an exciting little rampage to an exercise in futility and rage quitting.

At a $20 price point, Extinction is mechanically sound enough to warrant consideration of a purchase. It’s repetitive and after about 20-30 minutes, you’ve basically seen everything that the game does. Eventually, it becomes less about combat and more about speed running objectives, but by that point, you probably won’t be playing anymore and if you are, it’ll be because you’re clinging on in hopes there’s eventually a payoff for all that repetition.

Spoiler: There isn’t. At a $60 price point? There’s only one person who can sum that up better than I can.

Extinction was played on the PlayStation 4 Pro, and was provided for review by Iron Galaxy.