Leadr of the pack. 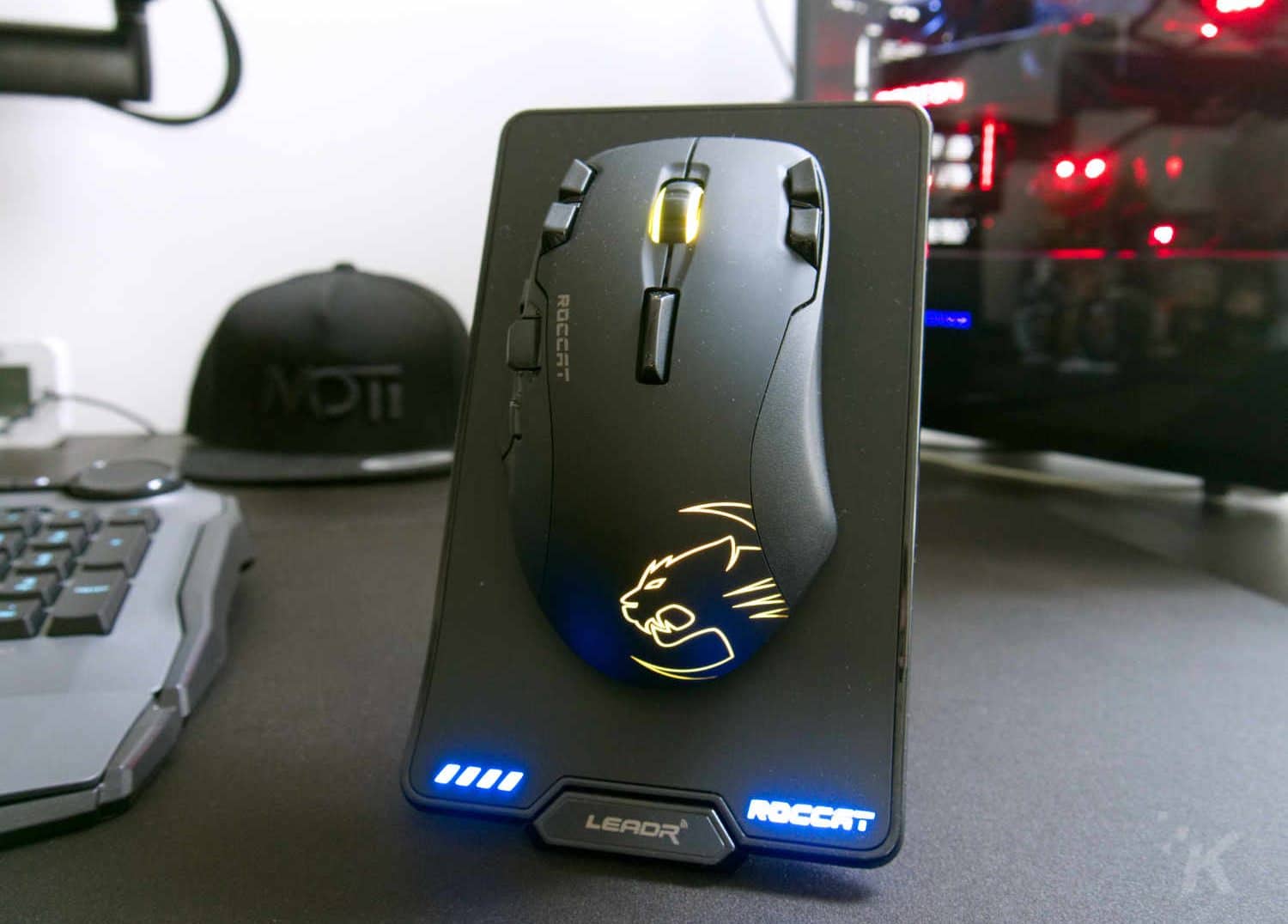 Image: Joe Rice-Jones / KnowTechie
The Good
No difference between wired or wireless modes for user experience
Long battery life
Huge feature-set
Can be used in wireless and wired modes
The Bad
Slightly expensive
You'll forget to charge it
9.3
Overall

Wireless PC peripherals have built up a bit of an image problem. Especially in gaming, where the slightest delay could cost you points, your life, or the game, latency is key. Roccat’s approach to winning back the gaming community is the Leadr, an advanced rechargeable wireless mouse that they say gives the same performance wired or wireless.

The Leadr packs a lot into its frame. There’s a 20-hour rechargeable battery that either recharges while the mouse is hanging on the wireless receiver/dock or while the USB cord is plugged in. Handily, the same cord is used to connect the receiver in wireless mode or plugged into the mouse in wired mode. The socket on the mouse for wired mode has a locking button so it won’t come unplugged during frantic flicks. The dock also has a four-LED display to show charge remaining, or if the mouse is charging.

The Leadr has 14 fully-programmable mouse buttons, plus a “2D Titan Wheel” and the X-Celerator analog thumb paddle which is bound to Scroll Up/Down by default. There’s also a fin switch on the top that’s bound to Lean Left/Right by default. The bottom button on the thumb-rest area is interesting, it triggers Roccat’s ‘Easy Shift’ which is a modifier so you can have two commands bound to every button and choose which one triggers by using the dedicated button, just like using the CTRL key on your keyboard for shortcuts.

Roccat’s Owl-Eye optical sensor is a modified PixArt 3360 that the two companies developed together. Dubbed the “PixArt 3361” it’s claimed that it offers true 1:1 accuracy. I’ve got a mouse with the 3360 in it (Nixeus Revel) and testing the two together I couldn’t detect any major differences. That a wireless mouse would perform as well as a wired one with the current best mouse sensor is nothing short of amazing to me. The DPI range of the Owl-Eye sensor is 100-12,000 although most people won’t go that high, pro gamers, for example, tend to stay between 400-3,000 DPI.

It’s a looker too, with the glowing Roccat logo that can be customized in the Swarm application. When I first saw the mouse at release I thought the extra buttons on the side edges would be easy to accidentally press. Having used the mouse for a few weeks now I can report that fear didn’t realize itself. The side buttons are just spaced wide enough that even my ham-fisted fingers don’t hit them unless I want to.

I’m really enjoying all the extra buttons, especially the X-Celerator analog paddle, I suffer from tendonitis so using the scroll wheel for long periods makes my hands ache. Being able to press on the paddle to scroll is a godsend and my favorite feature of the Leadr.

There’s no discernable reaction lag when clicking in either wireless or wired modes and the mouse wheel is smooth and is silent (something that plagues a lot of mice). It is fairly heavy, due to the battery so keep that in mind if you prefer a lightweight mouse. I really like it, I find I add all the weights if my mouse is customizable as it helps steady my arm, and the balance of weight in the Leadr is good also, with a balancing point that fits my hybrid claw perfectly.

Your mileage may vary due to your hand size and grip style, I could see palm users maybe accidentally hitting the side buttons on the top more, although they do need a fair bit of pressure to activate. Presumably, this extra force was designed in to guard against accidental activations.

Software on the Leadr

The Leadr shines right out of the box, but that’s only part of the story. Loading up the Roccat Swarm software lets you customize every aspect of the mouse to your liking. Don’t like the default button config? Change it with a few clicks. I liked the DPI buttons as preset, but I found I don’t change it between settings that much so I swapped binds so the fin switch on the top of the mouse became DPI changes. I’m used to that area on most mice having that functionality, and now it feels more at home to me. You can add audio feedback cues for some functions, adjust lift-off height, and all of the usual mouse-related settings here.

Roccat’s well-designed macro editor is also here, so you can really add a huge amount of functionality. This, and the customizable Easy Shift commands makes this gaming-centric mouse also useful for productivity tasks, and my Excel game is getting strong as a result.

Lighting is also controlled here, with various effects and the inclusion of lighting to show battery status. This is a nice touch, although it’s just as easy to glance at the dock to see how much battery is left.

The Roccat Leadr has really impressed me over the time of testing, so much so that all my wired mice are now stored away in a drawer. The only drawback I’ve found is forgetting to hang it up on the dock to charge, but then I remember that I can plug in the wire to continue using and all is right with the world again. The Leadr might be pricey at $139.99 but it’s worth it. It’s not just the best wireless mouse I’ve used – it’s the best mouse I’ve used, full stop.

You can pick up a Roccat Leadr directly from their website, or from Amazon.

The Good
No difference between wired or wireless modes for user experience
Long battery life
Huge feature-set
Can be used in wireless and wired modes
The Bad
Slightly expensive
You'll forget to charge it
9.3
Overall
Related TopicsLeadrPC HardwareReviewsROCCATwireless mouse