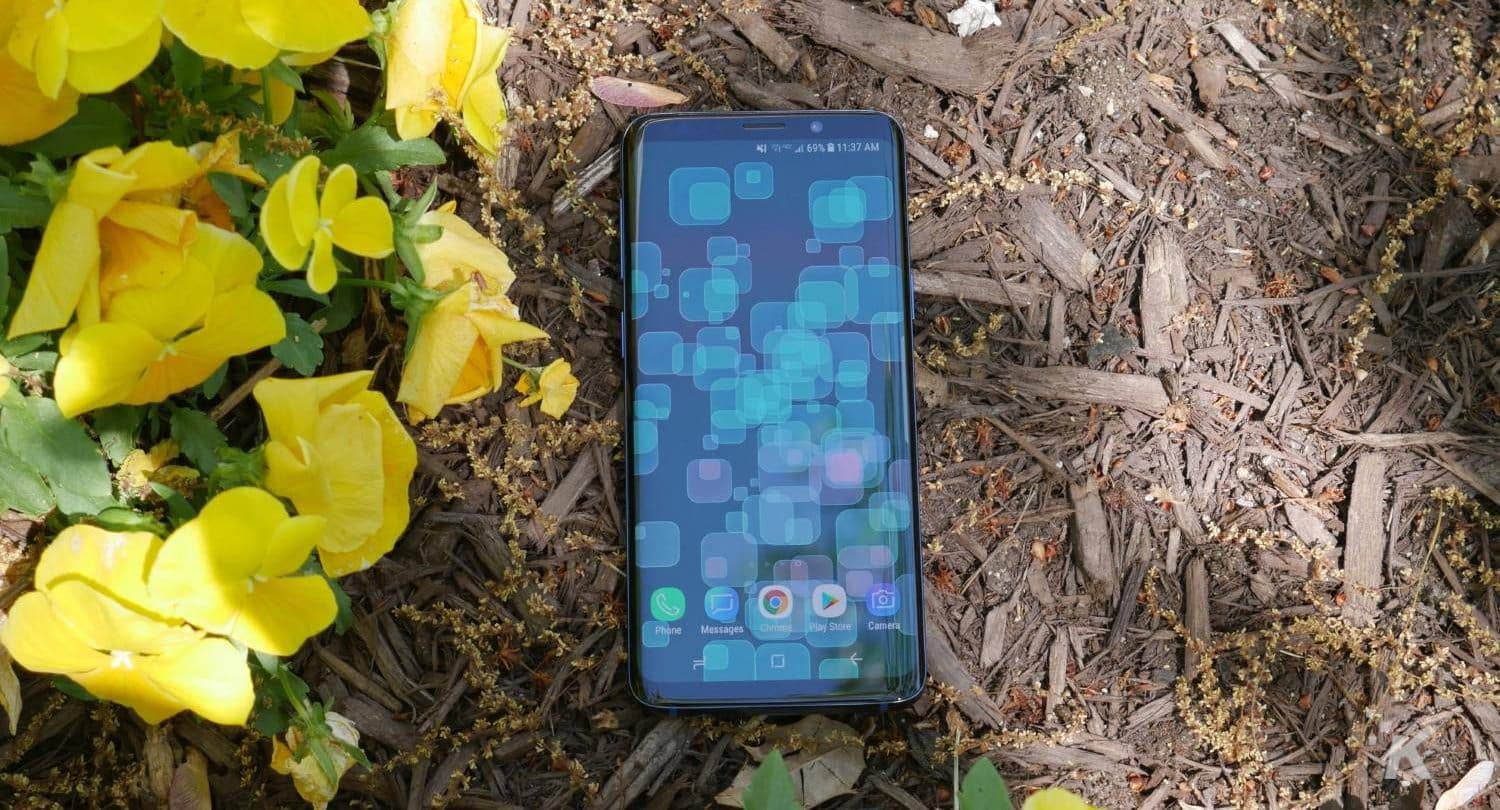 Image: Joe Rice-Jones/KnowTechie
The Good
AMOLED screen is breathtaking
Camera has good performance in any light
The Curve design is beautiful
Battery life is impressive
The Bad
Glass is well.. glass
It's a fingerprint magnet
9.5
Overall

Samsung’s latest flagship, the S9 has been out for almost two months now. I’ve been using one for a few weeks, with thanks to Verizon, for this review, and I have to say while what’s under the hood is technically impressive, I’m fairly underwhelmed by the updates from last years S8.

Since the current Galaxy S design language came in 3 years ago Samsung has become the Apple of the Android world, they own so much of the $700 flagship market that they’re releasing iterative versions of the same phones. If any other Android manufacturer did that they would get lambasted for being unimaginative, but maybe it’s because their Curve design language was years ahead of the competition.

Iterative or not, buying a Samsung Galaxy S flagship will get you the best non-fruit phone you can get. In the words of Phillip Berne (former lead for flagship Mobile product reviews at Samsung), ‘Every fix is a point Samsung can tally against its competitors, and the company loves keeping score more than anything else.’ Everything Samsung improves puts them one step ahead of than the competition.

Sure, the S9 almost looks exactly the same as last year’s S8. That’s not a bad thing though, the Curve design that first debuted on the Samsung Note Edge is still breathtaking. The edge-to-edge glass is still one of the classiest smartphone designs and is part of why Samsung is still the King. The new colors this year are understated but also different enough to break from the crop of uninspired colors among the competition.

The fingerprint sensor is in a good position for ease of use, and the corresponding curve on the back helps it nestle in your hand like it belongs there. It’s IP68 water resistant and the glass back enables wireless charging if that’s something you can’t live without. The glass is a bit of a double-edged sword, however, as it’s both a fingerprint magnet and easily damaged. It is a pocket-computer however, and you don’t go throwing your laptop around, do you?

Sure, it’s Gorilla glass and the tempering when the curve is put in also adds strength. It’s still glass, and I honestly felt worried every minute it was unprotected. Clearly, a good screen protector and shock-absorbing protective case are needed for daily use. Such a shame, when the only way to use such beauty is by covering it up.

The AMOLED screen in the S9 is simply outstanding. Samsung increased max brightness over last year’s S8 by a whopping 15%. The screen was already industry-leading before this, with color reproduction, clarity, off-axis viewing and viewability in direct sunlight that was head and shoulders above the competition. DisplayMate has a deeper dive if you want to read further, but you really only need to know that you’ll not be disappointed by the screen in any way. You’ll either love it or wish your phone had it as well. Samsung set the display to FHD+ as the standard for battery life, but crank it up to QHD+ and enjoy.

The 3000mAh battery is a good size for all-day usage. The PCMark for Android Work 2.0 test came in with 8 hrs and 34 mins which is a fair representation of screen ‘on’ time. Standby performance is the best I’ve ever tested. In an overnight test, the battery lost only 12% in 11hrs and 23% in 24hrs. No more needing to leave your phone charging overnight here.

The problem with Samsung phones is often the additional software that is always put on them. Bixby, Samsung’s AI Assistant, comes bound to a side-button that you can’t remap. He’s not that useful either, especially when I’m used to Google’s Assistant. If you want a phone that you can buy and just use without reading the manual, look elsewhere. Samsung does have an Easy Mode in the menus, but it’s also easily turned off and then you’re playing find-the-setting in the labyrinth of the menus. That does come with its upsides, with almost every feature of the phone able to be customized to your liking.

It’s also a way for Samsung to sell you services, such as extra wallpapers and themes. If you prefer vanilla Android, you won’t find it here. Some of the added features are welcome (scrolling screenshots is a particular favorite of mine), but many of them duplicate things that Android already does well. I guess it wouldn’t be a Samsung phone without it reminding you every few minutes with app names.

Even with the additional software, performance is great. The Snapdragon 845 powers through any tasks given to it and multitasking is effortless. The touchscreen is very responsive to input, something often overlooked when talking about specifications. The AnTuTu Benchmark shows it destroying all the competition in their database.

The sound from the AKG-Harman tuned stereo speakers is pretty impressive for their diminutive size with the S9. It also comes with a nice set of AKG IEMs, which is a cut above the headset on offer from most of the market (if you get a headset at all). And yes, Samsung kept the 3.5mm headphone jack so you don’t have to become a cord cutter just yet.

The current smartphone camera king is still the Pixel XL, but that’s only because of the post-processing that Google’s flagship does after you press the shutter. The 12mp camera in the Samsung S9 is the camera that comes closest to reproducing what your eyes see in a scene. I like this, it ensures that the captured precious moments are faithful to your memories of the same events. And talking about special moments, double-tapping the power button gets you from sleep mode to camera in less than half a second so you’re less likely to miss anything you wanted to capture.

The front-facing camera is near-magical, adding bokeh to your background and also smoothing out your complexion.

The oft-talked about F1.5 and F2.4 in Pro mode are great outside when there’s a good separation between the background and your subject. If you look at the stormtrooper minifig on the purple background, this was taken on the same setup that I created the bokeh for the earlier images with my Lumix G7. A lens the size of a smartphone unit just can’t create the bokeh of a larger camera.

That’s okay though, as for most situations that you’d use a smartphone for – the Galaxy S9 camera excels.

The 960fps super slo-mo mode is fun, but with it being limited to only 0.3 of a second it’s a technical achievement that’s less useful in practice. The 240fps slow-mo setting that’s disabled by default on the S9 is far more practical, with no limit on the recording time other than available storage.

Low light performance is pretty impressive, with less of the digital noise of other smartphone cameras. Images do suffer slightly from oversharpening, in an attempt to fool the eye into thinking there’s more detail than what the phone’s optics are actually able to resolve.

Should you buy it?

If you have any Android that’s two years old or more, you won’t be disappointed by buying the Galaxy S9. The screen is by far the best on the market and the camera performs well, especially in the Auto mode that you’ll most likely use the most. The battery life is impressive considering the power in the Snapdragon 845, the engineers at Samsung know what they’re doing with optimizations.

Ultimately it comes down to personal choice. If you’re invested in Apple’s ecosystem, you’re probably best off staying in their walled garden. If you want the best hardware available at any cost, you’ll be well-served by the Samsung Galaxy S9.

It’s a worthy successor to the crown of the S8, and likely will be the best phone of 2018. Until the next Galaxy Note, that is…

The Good
AMOLED screen is breathtaking
Camera has good performance in any light
The Curve design is beautiful
Battery life is impressive
The Bad
Glass is well.. glass
It's a fingerprint magnet
9.5
Overall
Related TopicsAndroidBixbyGalaxy S9ReviewsSamsung