The Voxelab Aquila X2 looks great, but sadly doesn’t live up to its looks. 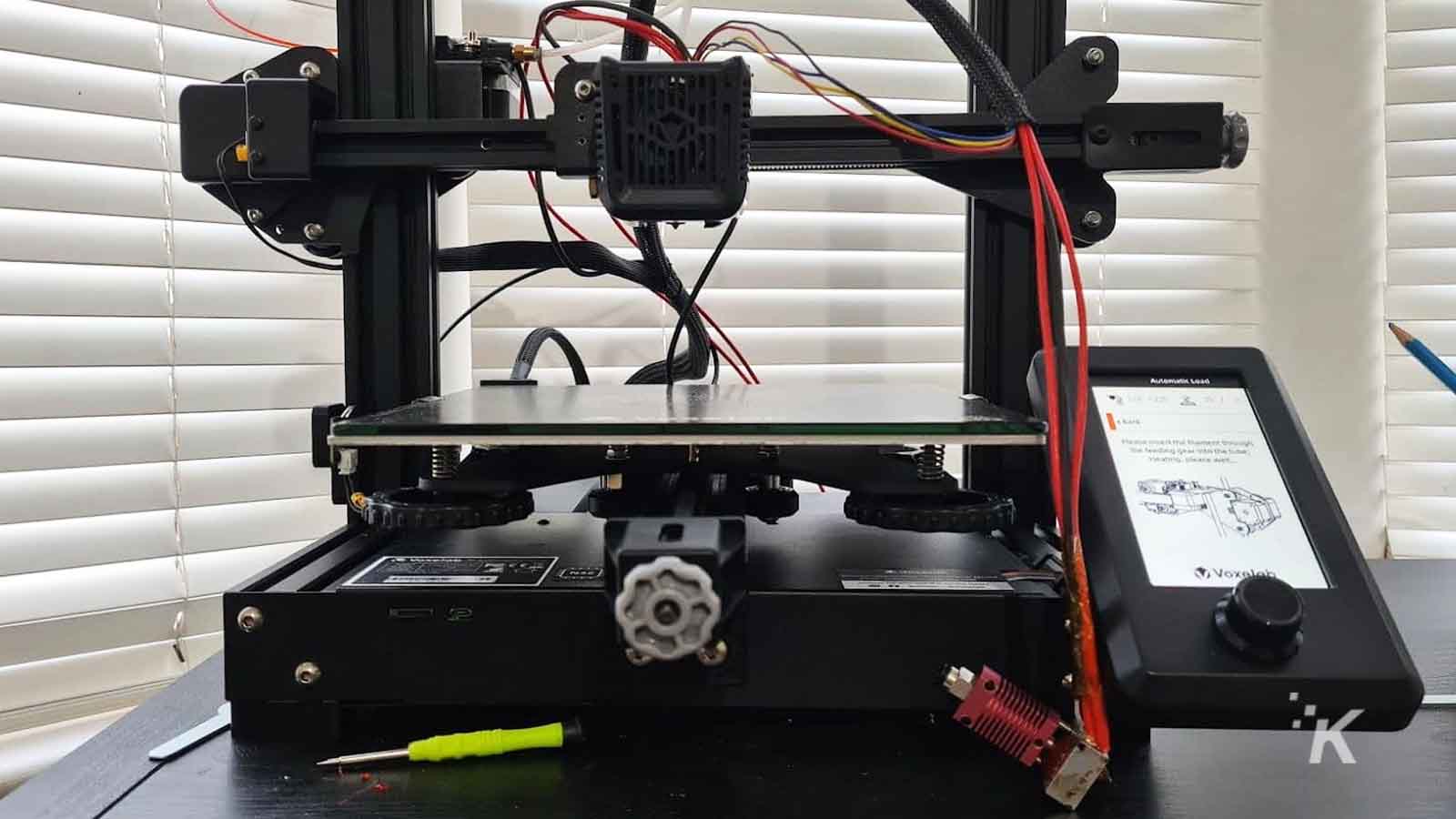 3D printers are an incredible evolution in technology. Sci-fi films and books talk about the idea of being able to print food, clothes, and other essentials. In reality, the 3D printer is a dream for creative minds. A lot of the time, though, they can be cost-prohibitive.

Recently though, a few $200 models have hit the market, giving broke shmoes like me the opportunity to print an army of miniature 3D printers.

Unfortunately, as you’ll see from this review, the $239 Voxelab Aquila X2 stamped all over my stupid wonderful plan.

Instructions for putting the printer together are clear and easy to follow, and you should have no trouble identifying the individual components.

Once built, it both looks and feels like a premium product. The metal frame is sleek in black. Any wiring extending from the base is tightly wrapped in a classy black mesh covering. For the price, I definitely didn’t expect it to be so sexy!

READ MORE: Review: Anycubic Vyper 3D Printer – easy to use and easy on the eyes

Once it was all ready to go, I downloaded Voxelab’s software to my laptop and let my mind take over. A full-sized Master Chief helmet was within reach. A personalized dock for my Nintendo Switch. Hell, I could even bring my weirdest nightmares to life by printing a weird dick/dinosaur hybrid.

I’m sure you can use the software to create your own projects too, but I never got to actually test this out. You’ll see why very soon.

So I’ve put it together, and it looks beautiful. I’ve used the simple software and loaded a new project from Thingiverse onto the SD card. I’ve warmed the bed and nozzle. Time for a test print. It worked! Aaaaaand, that was the last time it did…

My next attempt – a skull-shaped shot glass – started off great. I watched the first few layers build up, and everything seemed awesome. After a few hours, the bed must have shifted because it ended in the picture you see above.

Time for a bed reset and re-leveling. Try again. Everything from this point on spaghettied on me. Simple test projects. Bigger ones. They all went to shit. Eventually, the nozzle got clogged and wouldn’t even print anymore.

So, I tried absolutely everything I could think of. I repeatedly re-leveled the bed, reset things, and switched the nozzle out for the supplied replacement. I heated the nozzle and bed before getting started, lit some candles, and put Marvin Gaye on low. Adjusted how quickly the extruder feeds, slowed the print right down, and changed each of the axes to get the perfect angle. It was almost sensual. All that was missing was an Autoblow.

Re-slicing projects in the software, adjusting the tension on the belts (kinky), trying different filaments. None of these worked. The second nozzle ended up clogged, too, but this time it also leaked all over the hot-end kit. Voxelab’s customer service was absolutely fantastic when I ran to teacher (Kev) and asked him to get in touch with them, so they sent me a new hot-end kit.

I really, really wish that was the end of my problems and I could say that the new kit made everything work perfectly. It didn’t. At all. For a start, replacing it required me to open up the base, to be greeted with the sight you see above.

For those that haven’t figured it out, the image above is the printer’s motherboard with precisely zero labels giving me a clue as to what was plugged into it.

If you weren’t keeping score, here’s the current rundown of issues: two clogged nozzles, about eight hundred and forty-two thousand failed prints, countless failed leveling attempts, a replaced hot-end kit, and a set of cables that sticks out like a bad case of herpes. Along with a ridiculous-looking printer that I couldn’t bring myself to ruin the mesh cable coverings from…

I’m nothing if not stubborn though, so I had one more attempt. I took my time re-leveling again. I cleaned the bed with isopropyl alcohol. Warmed up both the bed and nozzle, then let them maintain the heat for a little while before starting the new test print.

Between the copious amounts of alcohol and doing everything I could to make sure conditions were perfect, it was almost as tough as getting my ex-wife in the mood. This time though, I seemed to be getting results. It started off awesome.

To say I was excited at this point is an understatement. After all the problems painstakingly listed above, I finally saw the light at the end of the tunnel.

So many project ideas were popping into my head. I’d finally have my skull glass. I could print a T-Rex for my dinosaur-obsessed kid! A series of the previously mentioned dick/dinosaur hybrids to hide around the house and see how long it would take for my partner to find them (and, subsequently, launch at my head.)

Yeah, it never worked. I threw one last hissy fit Kev’s way, and he agreed it was time to call it quits, so here we are.

These issues aren’t a case of me being technologically incapable. I can troubleshoot with the best of them (replacing Galaxy S20 charging ports notwithstanding.) At one point, I plunged into the sickening depths of Reddit to try and find advice. There are several threads criticizing build quality. Print quality. Even Voxelab’s own internal QA.

There were absolutely zero complaints about their customer service – and I genuinely can’t imagine why there would be; they were fantastically helpful – but it’s frustrating that getting in touch with them is such a common issue in the first place.

The Anycubic Voxelab Aquila X2 is pegged as an entry-level device, and to its credit, the quality of the parts used gives it a much more expensive feel, unlike the Anycubic Vyper. Where it falls down is in the difficulty of actually printing on a consistent basis. It’s incredibly disheartening, especially because I’ve wanted a 3D printer for years.

Like I said earlier, I tried everything I could think of to get consistent quality, but it just never worked out. If you’re willing to pick up a couple of mods – like a leveling sensor and a better extruder – and have the time to put into it, you’ll have a blast.

But if you’re just looking for a way to dip your toes into the world of 3D printing with zero experience, I simply can’t recommend a purchase right now, which is one of the most disappointing things I’ve ever had to write.