Review: WARSAW – an interesting tactical RPG that is depressing in more ways than one

There are a lot of really interesting pieces here, they just need to be put together a bit better.

Image: Pixelated Milk
The Good
The concept of WARSAW as a game is neat and pretty unique.
The art is badass, I love it.
The Bad
Crashes suck, restarting missions sucks.
The game isn't running the math for outcomes correctly.
My little kid scout died during an event and I had to go back to the base and see he wasn't playing with his toy train anymore.
6
Overall

Way back at PAX East, we got a pretty good demo of WARSAW. Back then, I thought the game was pretty neat, if not a bit depressing. WARSAW is based on the historical Warsaw Uprising in 1944, where the Polish Home Army tried to fight back against the Nazis during World War II.

Spoiler: Warsaw was ravaged and the Polish Home Army was unfortunately routed. Not that you need to know this, but WARSAW follows events with decent accuracy. History buffs would probably dig it.

As a rogue-like tactical RPG (role-playing game) with turn-based combat, WARSAW wants you to feel the absolute struggles and desperation of fighting against one of the most devastating armies in modern history with ill-trained soldiers and civilians. With a style that closely emulates Darkest Dungeon and combat that leans heavily on tactics. It also is a game that has most of the gameplay elements tucked into combat, which needs to be avoided as much as possible.

I’ll get into it more shortly, but WARSAW makes you feel penalized for every decision you make. It makes sense within the scope of the game, however, as you are fighting a losing battle.

The character art and animation in battles in WARSAW are almost breathtaking. The art style is close to Darkest Dungeon, with gritty comic style characters with heavy outlines. Combat effects are vibrant and stunning, which is weird to say when it’s blood coming out of someone.

Characters speak in Polish and German, I have no idea what they are saying but I appreciate it. Music is minimal and fits the game’s theme well, but the sound effects are top-notch. Presentation is where WARSAW wins. 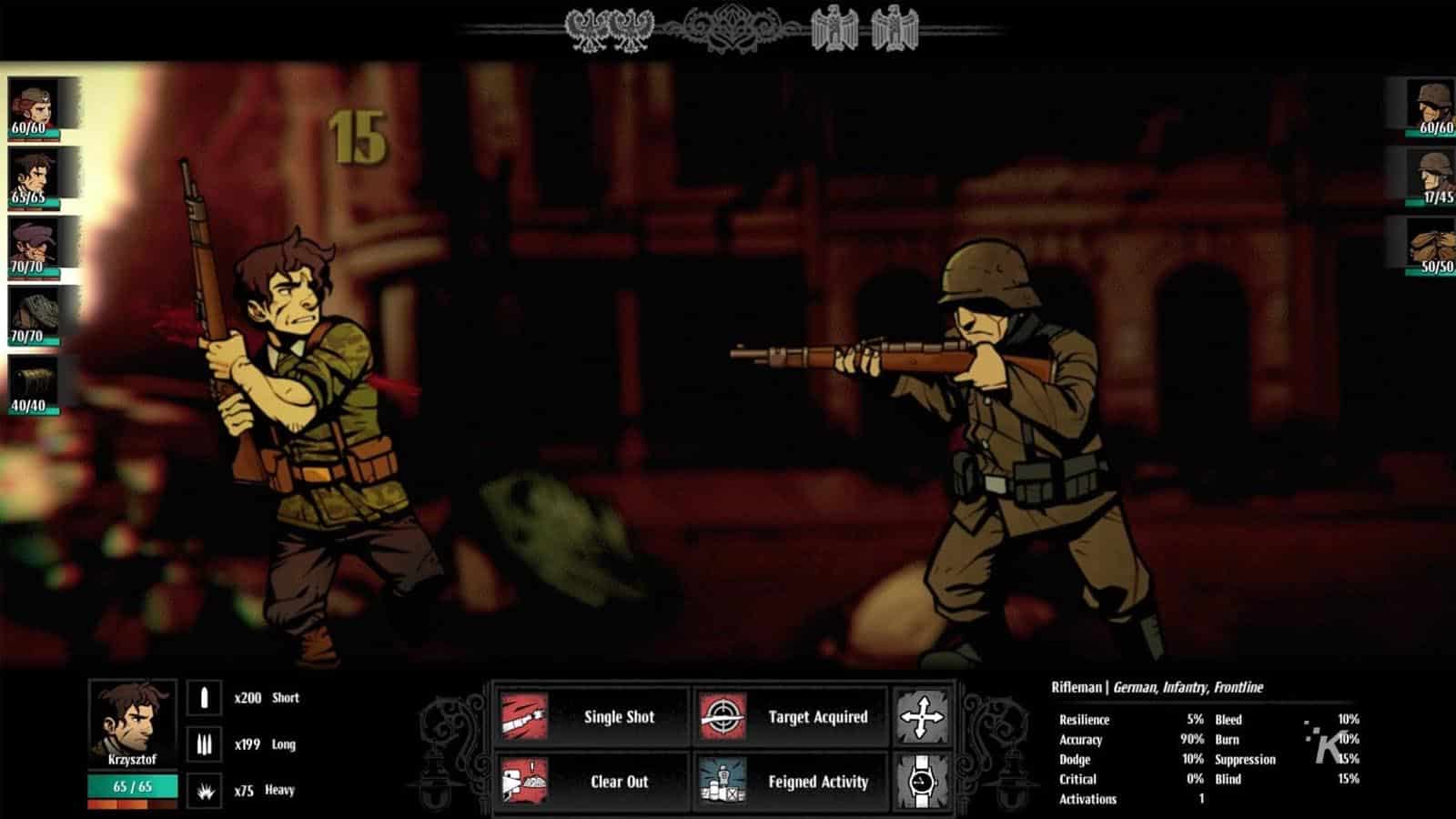 Playing WARSAW will jump you between a few phases of gameplay overall. There is a post-mission phase where you impact your camp and manage rations and ammo. Generally speaking, there usually seems to be an event that can improve or lower morale through text-based options you can select. Different characters have better chances of succeeding, which will boost up the camp a bit, while failing the check will lower it significantly. After each phase, the date is updated and a large number on the screen changes.

Once you have cleared the post-mission phase, there is a camp management setup where you interact with characters, equip gear and learn a little bit about your resistance members. Learning about your team requires you to meet certain requirements. I did like trying to flesh out my characters’ backstories. The characters you recruit and join the resistance will show up at the camp as you get them. The base grows more lively as your resistance does. The opposite will happen as well as you lose characters, with their spots permanently empty.

Generally speaking, the camp part of the game is a bit of a reprieve from how heavy most of the other gameplay is.

After selecting a mission, you are taken to a map where you have to move your team’s cursor around to discover supplies, take part in events, and fight battles. The mission is filled with randomly generated encounters and choose-your-own-adventure events that are different every time you play.

As I said before, the meat and potatoes of WARSAW are within the combat. Overall, Nazis will do more damage and you’ll need to manage your ammo while chipping away at enemy health. Making sure you have the right soldiers in the right positions will make or break an encounter.

In some later encounters, my medic would be more or less a wasted turn when trying to take down devastating Nazis. Positioning characters incorrectly would also put some enemies out of range and cause my team to take unnecessary damage while repositioning. Unfortunately, characters dying in WARSAW is almost inevitable and when it does happen they are gone for good.

Death is permanent and so is my disappointment

A bullshit death with a high chance of success (Image: Josh Knowles / KnowTechie)

As a completionist, I hate losing characters. In WARSAW, you ultimately are supposed to. The thing is, the game likes to also go about it in ways that are absolutely infuriating. Some encounters in the field will result in deaths. I’ve rage quit several times over losing an 80% success encounter and having one of my best team members die. After a few times of this happening, and weird misses and damage in combat, I also feel like the game is working against me. After feeling like the most unlucky person in the world, I looked online and appears the game currently sucks at math.

Many encounters in the game will make you feel ill-prepared, which was Pixelated Milk‘s point from day one. You’ll miss shots you have no business missing, wasting ammo and causing characters to get hurt in the counterattack turn. I’m not sure if that is meant to be the case, to emulate the frustration and despair of the Polish Home Army, but hot damn is it frustrating. Several times, I’ve ended up running out of ammo mid-mission due to simply not hitting things. That’s not even the tip of WARSAW‘s Titanic-sinking iceberg though.

Several times as I played, the game would simply close. No real prompt or error message, just my desktop’s outrun-style wallpaper just sitting there. Upon loading, it seemed that either weird glitches happened, like my inventory vanishing or the mission restarting. The restarts were weird because as WARSAW is a rogue-like, it means enemy placements and events are thrown about when I load back in. The game also loves to crash on nearly flawless runs and put me into devastating situations when I go back in.

The more I played WARSAW, the more apparent it was that the game wasn’t much different from the demo I played half a year ago. It’s not exceptionally polished and weird bugs and unfinished(?) content seems to be left in.

It’s a huge bummer that the game is marred with so many errors and bugs because I love the concept of the game. A historically accurate rogue-like tactical RPG is a unique concept and the team behind it tackled it as a labor of love. Under the dirt and depression of WARSAW, there’s a diamond there. If the game gets some decent updates, it wouldn’t be a bad pickup at $23.99.

I won’t tell you to avoid WARSAW overall because I like what it is. I’ll tell you though that the game feels like early access and if you want to give it a try, approach it as such, even though this is a 1.0 release.

WARSAW is now available for PC.

The Good
The concept of WARSAW as a game is neat and pretty unique.
The art is badass, I love it.
The Bad
Crashes suck, restarting missions sucks.
The game isn't running the math for outcomes correctly.
My little kid scout died during an event and I had to go back to the base and see he wasn't playing with his toy train anymore.
6
Overall
Related TopicsGameTechieReviewswarsaw