Review: The i7-8700K processor from Intel

A look at Intel’s latest chip in comparison to the Ryzen 1800x. 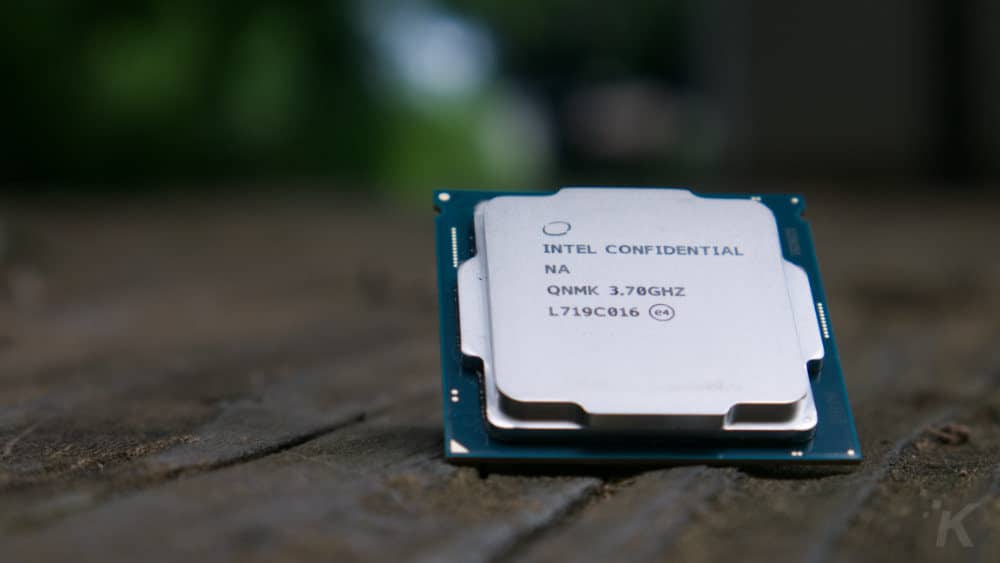 It might seem strange to talk about a competitor’s product first, but please, just indulge me a minute. AMD’s release of the Ryzen processor range last year gave Intel its first real competition in what seems like forever. A response was needed to retain their crown as the top chipmaker and Coffee Lake was that answer. The i7-8700K that I’m looking at today is the top of that product family, with a $359 MSRP (currently at $347 on Amazon). This particular chip was intended to challenge the top of the Ryzen processor line, and that’s what we’re going to be testing today. 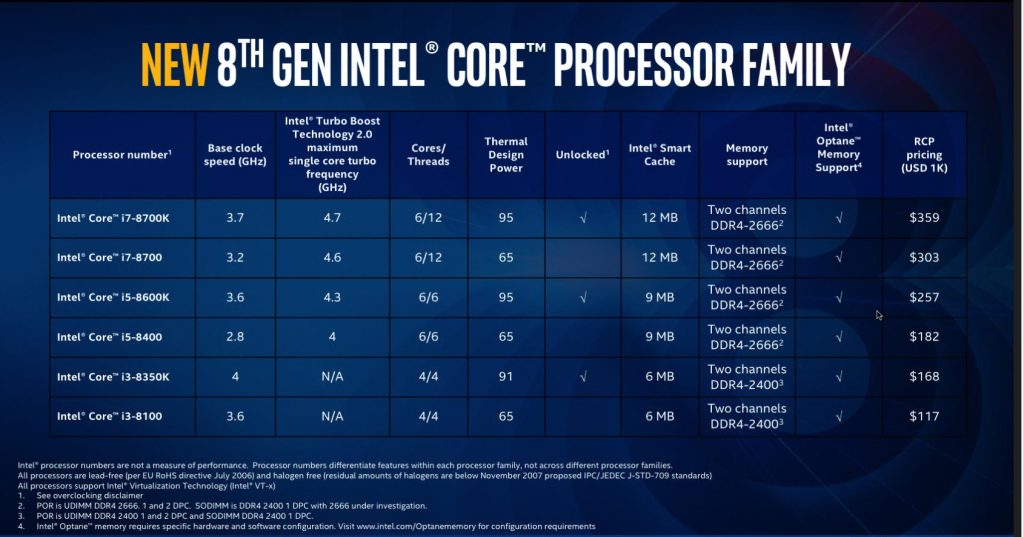 Intel’s been on the same 14nm process node since the Broadwell family of processors were released in 2014. That doesn’t mean it’s been resting on its laurels though, as yearly improvements have come in the form of frequency, efficiency and now, core count. The 8th-gen lineup increased the core count by 50% over Kaby Lake, while keeping pricing fairly similar. That’s a big deal for Intel, who’s kept the consumer core count at 4 for years now and not long ago even 6-core processors were upwards of $1,000.

Even though Coffee Lake is essentially an update of Kaby Lake, with the same CPU socket, it still requires a new motherboard. Intel says this is due to a couple of specific reasons. First, the increase in officially supported DDR4 speeds to 2666 from 2400 required a redesign of the layout of the wires, or ‘traces,’ that connect everything together. Coffee Lake also brought the per-core overclocking of Broadwell-E to the mainstream range, which allows users to individually overclock cores based on their workload. This is a big change from the all-core overclocking that prior generations came with and one we’re glad to see trickle down.

The i7-8700K has 6 cores, with 12 threads with HyperThreading. It’s also got per-core boost, which gives you an extra oomph for single threaded tasks. One core can boost up to 4.7GHz, two cores will go to 4.6GHz, three cores can boost to 4.5GHz, four or five can get to 4.4GHz, and it’s got all-core boost of 4.3GHz. That’s the out-of-the-box figures, you can get higher with the highly-overclockable chip. 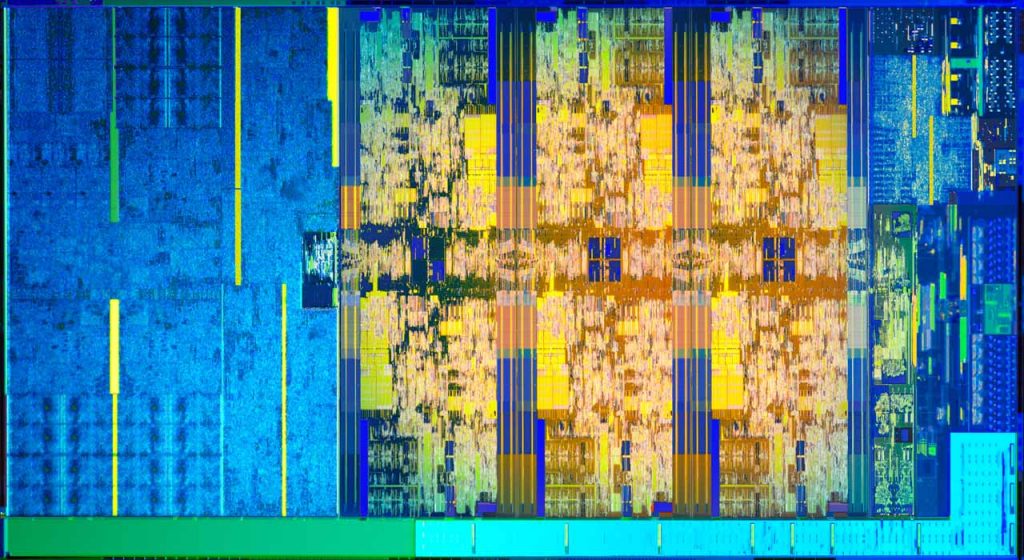 A lot has changed since the Ryzen 7 1800X went on sale over a year ago. We took our best X370 board (the Gigabyte AX370 K7), updated the BIOS to the latest available non-beta version, put a fresh install of Windows 10 Pro onto an SSD and installed the latest AMD chipset drivers. Windows has been updated to work better with the Ryzen line, so we left power settings on Balanced on both builds.

We took our most powerful on-hand GPU, the AMD Fury X, with the latest driver, and used the same GPU on both setups for consistency. This might be an older generation but it’s still more than enough for testing at 1080p, which most home users will be using. We used the same 32gb of Ballistix Elite 3466 on both boards, running at their stated speeds. Ryzen did have initial issues with RAM speeds and compatibility, but those are all but ironed out now.

On the Intel setup, we chose the corresponding board from Gigabyte, the Z370 Gaming 7. The same SSD was used with a new fresh install of Windows 10 Pro. 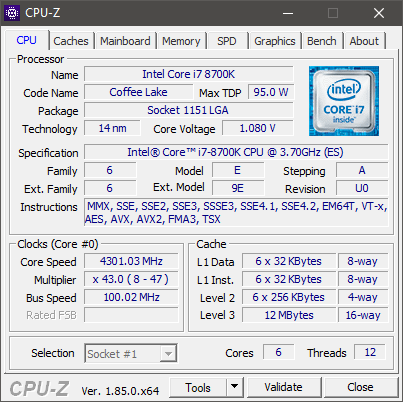 First up is Maxon’s Cinebench R15. This popular, free benchmark is a good representation of a professional 3D rendering workload and is based on the same engine used in the company’s professional Cinema 4D program. It also scales well over more cores, so is a great workout for modern CPUs. The i7-8700K blazes past the Ryzen 1800X in the single-threaded portion of the test, 195 to 151. That’s down to the higher clocks on the Intel chip, and the single-core boost. The multi-threaded test reverses positions, but not by much. 1609 for the Ryzen 1800X vs 1433 for the i7-8700K. The Intel chip here lags behind purely on core-count, having 6 vs the 8 in the AMD chip. Still, you can see the gap isn’t much and shows the higher clocks on the Intel chip almost closing on the AMD one.

Then it’s the 7zip benchmark, which tests how quickly your CPU can compress/decompress a test file. More of a comparison tool, it shows that the higher-clocks on the i7-8700K pull ahead of the Ryzen chip.

The PCMark 8 benchmark runs a series of typical workloads on both Microsoft Office and Adobe suites. This gives you a real-world benchmark score, which some feel is better than the usual synthetics. Here the i7-8700K was almost 25% faster on the Adobe tests and almost 20% faster on the Microsoft tasks. Either chip will give you enough power for these type of workloads but the Intel chip again edges ahead.

The PCMark 10 benchmark also does a real-world benchmark, with a pre-set routine of tasks including picture manipulation and other typical desktop tasks. The i7-8700K again edges out the Ryzen 1800X, by nearly 13%. This is more proof of the higher clockspeeds paying dividends for Intel.

3DMark is still the most used benchmarking suite for synthetic game performance. The Firestrike test runs in DX11 and the Timespy tests DX12 performance. If you’re paying attention, there’s a trend forming. The i7-8700K blazes ahead in Firestrike, where core frequency always outperforms cores. In the DX12 Timespy test, the extra cores of the Ryzen 1800X just pips the i7-8700K to the post, but only just. The i7-8700K beats out the competition in the API draw calls benchmark as well, due to the extra core frequencies.

VRMark’s Orange Room benchmark gives a synthetic way to benchmark the VR experience for the user. The Ryzen 1800X wins out here, again because of the extra two cores. Bear in mind this is a synthetic so the actual experience of VR on the two chips might not differ much.

Ashes of the Singularity: Escalation is a great game to test core scaling. The benchmark just loves extra cores and uses everything available to it. Not surprisingly, the extra two cores of the Ryzen 1800X comes ahead here, although only by one FPS which isn’t really enough to notice while playing. Either chip will do you just fine here.

Gears of War 4 is the Coalition’s best (and most optimized) title to date. It scales well over cores and frequency, and across different hardware. Interesting results here with the i7-8700K beating out the Ryzen 1800X. Again, the core frequency is more important for gaming than the number of cores and this title shows it off to great effect.

Rise of the Tomb Raider has an in-depth benchmark that also comprises three different sections of the game. No surprises here with the i7-8700K clearly leading over the Ryzen chip.

Conclusions (and which to buy of the two and why)

The real acid test for any CPU is a combination of performance and price. It’s pretty self-evident that the i7-8700K has oodles of performance under the hood, with a mature architecture and the highest core clocks of an Intel CPU to date (excluding the overclocked i7-8086K, which is essentially the same chip). That high clock helps in almost every daily task that consumers will be doing.

Coffee Lake and the i7-8700K, in particular, goes a long way to fixing the issue with the prior generation – core count. The Kaby Lake chips were fast, but in professional creator workloads they lost out to the Ryzen range in almost every task. That situation is very different today with the extra two cores of this flagship i7-8700K, with the Intel chip back in the race again, and just pipping the multi-core Ryzen to the post in some tasks.

It all comes down to your workload. Do you game with mainly Office-based tasks? Then the i7-8700K is for you. If you’re also a content creator who wants to edit video, then maybe look at the current Ryzen chips. That’s not to say that the i7-8700K won’t perform at this workload, especially with Adobe adding Quicksync support to Premiere, just that those type of programs love more cores.

We’ll be following up with articles on single-PC streaming and overclocking, so look out for these. A sample unit was provided for the purpose of this review.

More more reviews, make sure to check out: