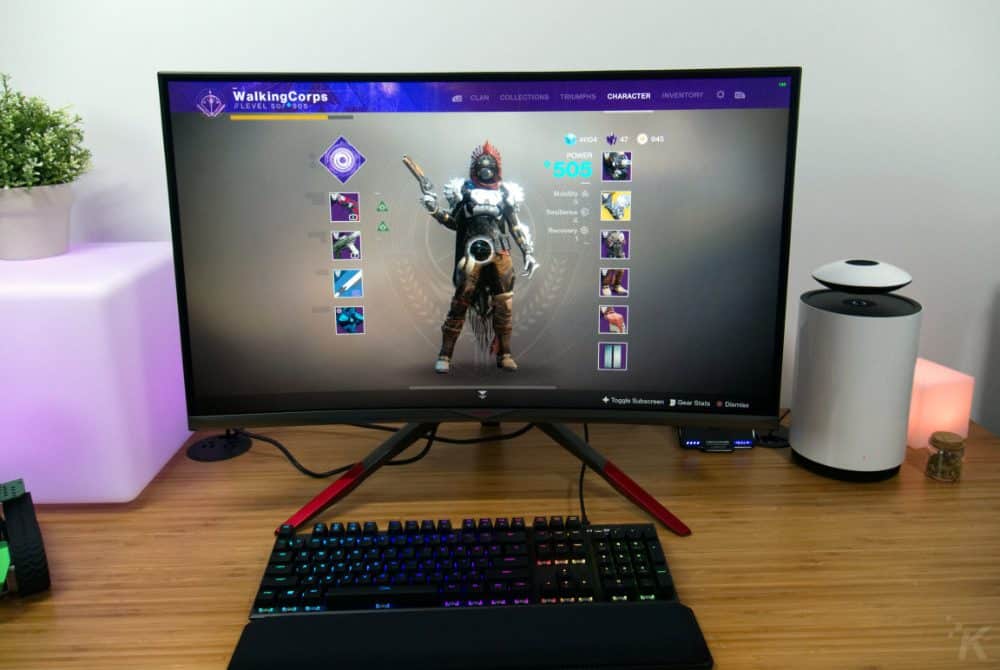 The humble monitor is often overlooked when talking about PC specifications. So much is talked about the hardware driving the monitor because it’s easier – you can quantify everything. Specs don’t tell the full story with monitors, however, you often need to see them in person. That said, I do have a color calibration tool so at least I can quantify some things for you today.

You might not have heard of Viotek, but the company is consistently ranked well on Amazon since its foray into monitors. That’s partly due to the pricing, which is in the similar bracket as companies like Pixio or even MSI.

The monitor we’re looking at today is the Viotek GN32LD. This is a 31.5″ screen with a curved 1440p VA LCD that tops out at 144Hz. It’s also FreeSync enabled, something that’s good to see on a higher pixel count monitor. You really need a fairly beefy GPU to get the most out of this, but with FreeSync even lower frame rates will still look buttery smooth.

It’s priced at $470 through Amazon, which is similar in price to other monitors based on the same Samsung VA panel from competitors, but it’s a quite a bit cheaper than monitors like the Asus ROG Strix XG32VQ or Samsung C32HG70.

When I test out budget-oriented monitors I’m always on the lookout for a few things – is the build quality any good, is the display defective in any way, and how well was it protected in shipping. Our retail unit shipped with no issues at all, no dead pixels, no damage (even to the box) so that’s a big check in its favor already. Viotek has a dead pixel guarantee if you’re unlucky enough to get one, so there is some protection on that end, as well.

The first thing you’ll notice when taking it out of the box is that it’s a behemoth. I mean, you’d expect that with a 31.5″ screen anyway, but the stand is equally awe-inspiring. That might be an issue if you have a smaller desk, as it took up easily half of the depth of my 30″ desktop. Thankfully, there are 75×75 VESA mounts so you can put it on a monitor arm and reclaim that space. Just make sure you check the max weight, with the Viotek being 20lbs it’ll tax lesser arms.

Setup of the monitor with the included stand is pretty simple, bolt the sections together, and add the plastic cap that covers the bolt heads. Then, you hang the panel on the top and push it slightly to click it into place. Certainly easier than some monitors I’ve used that required the panel to be screwed to the stand. There are limited height and tilt adjustment features on the stand, but no rotation and no channels to manage cables.

The bezels on the front are fairly small, except for the bottom one that’s angular and has the logo in the middle. 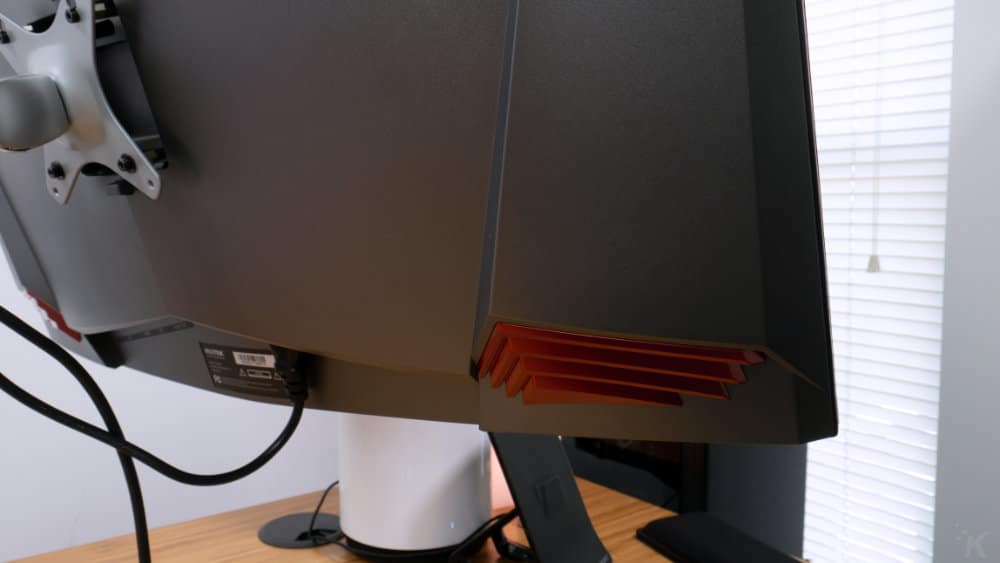 There’s also a lot of angular details and red vent style sections on the back. This keeps with the gamer demographic that Viotek is aiming for, but could be toned down a little, I think. There are also two RGB strips on the back, which kinda clash with the red. They’re also not very bright, so maybe a future iteration can have larger RGB with more luminosity so you can have proper mood backlighting from it.

All taken together, it doesn’t really say ‘budget’ more than ‘gamer’ so the design works for the market Viotek is targeting.

The only minor annoyance is that Viotek opted for four buttons along the bottom edge for controlling the menus. There’s a lot in these menus, with FreeSync, Bluelight reduction, Overdrive, Picture in Picture and all the usual sliders for calibration color and brightness, so a four-way joystick would really be an asset here.

The GN32LD has the usual connectivity, DVI, HDMI, and a DisplayPort, plus an audio output jack. The monitor supports FreeSync with low framerate compensation and a FreeSync range of 48 to 144 Hz. That really is a great thing at this price point. Adding the 2560 x 1440 resolution into that mix means it’s a viable option for most gamers with reasonably high-end hardware, with a mix of smoothness and clarity.

The 1800R curvature on the Samsung VA panel helps with the size of the monitor, although it does take a bit of getting used to coming from a flat panel.

As it’s a VA panel, you get that great contrast on screen. This will really help immerse you in the action, and you don’t get that not-black-but-gray you get with IPS. The downside is that the Gray-to-Gray response rate is lower, but I couldn’t say I noticed any ghosting while I was testing.

Out of the box, the picture wasn’t very calibrated, but that’s to be expected on lower cost panels. They just aren’t calibrated out of the factory and require a little finessing. Thankfully, just changing a couple of settings gets a much more acceptable display, with changing the Gamma to 2.4 (which somehow gives a Gamma of 2.2), and tweaking the color temperature away from the warm tones of the out-of-the-box state.

I have a Datacolor Spyder5Elite on hand, so I took the calibration even further. I managed to get a 0.6 DeltaE from the white point, and 0.3 from 50% gray. That’s a better result than either of the other monitors I have on hand to test (Asus VG248QE and AOC i2367f). It’s accurate enough to do color work on it, which is pretty impressive considering it’s aimed at gaming.

After calibration, it also covered 86% of AdobeRGB, 84% of NTSC, and 100% of the sRGB spec. There’s a small amount of variance in brightness going across the panel, but this is something that all curved displays suffer from so it’s not something to worry about here.

Here’s a short clip of me playing Destiny 2 on the GN32LD. Bear in mind this was after calibration to a neutral color profile and not the out-of-the-box color levels. Note the richness of color, deep blacks that are so characteristic of VA panels, and the lack of blur or screen tearing.

So should you buy the Viotek monitor?

Well, if you run an AMD graphics card and you do mostly gaming with maybe some graphic design or photo editing – the GN32LD is well worth looking at. The panel is just as good as the more expensive monitors using the same one, and any corners cut seem to have been done in the casing. If you have enough room for the stand on your desk or have a sturdy monitor arm, it’s almost a no-brainer. There aren’t many monitors in this price range with the same set of specs and it’s a viable alternative to the better-known brands.

The only real caveats are that you’ll have to tweak the calibration yourself as it doesn’t seem that much was done at the factory, and that the warranty period is only one year – a short time for something you’d hope would last many years.

Even with those though, I can still recommend the Viotek GN32LD at the asking price of $470, you get a premium viewing experience that’s wallet-friendly.

Reader Rating0 Votes
0
The Good
Great color once calibrated
FreeSync range of 48-144 is great
1440p 144hz for a bargain price
The Bad
Finish is a little cheap in places
RGB lighting feels like an afterthought
8.9
Overall
Related TopicsFreeSyncGN32LDPC HardwarePC MonitorReviewsViotek