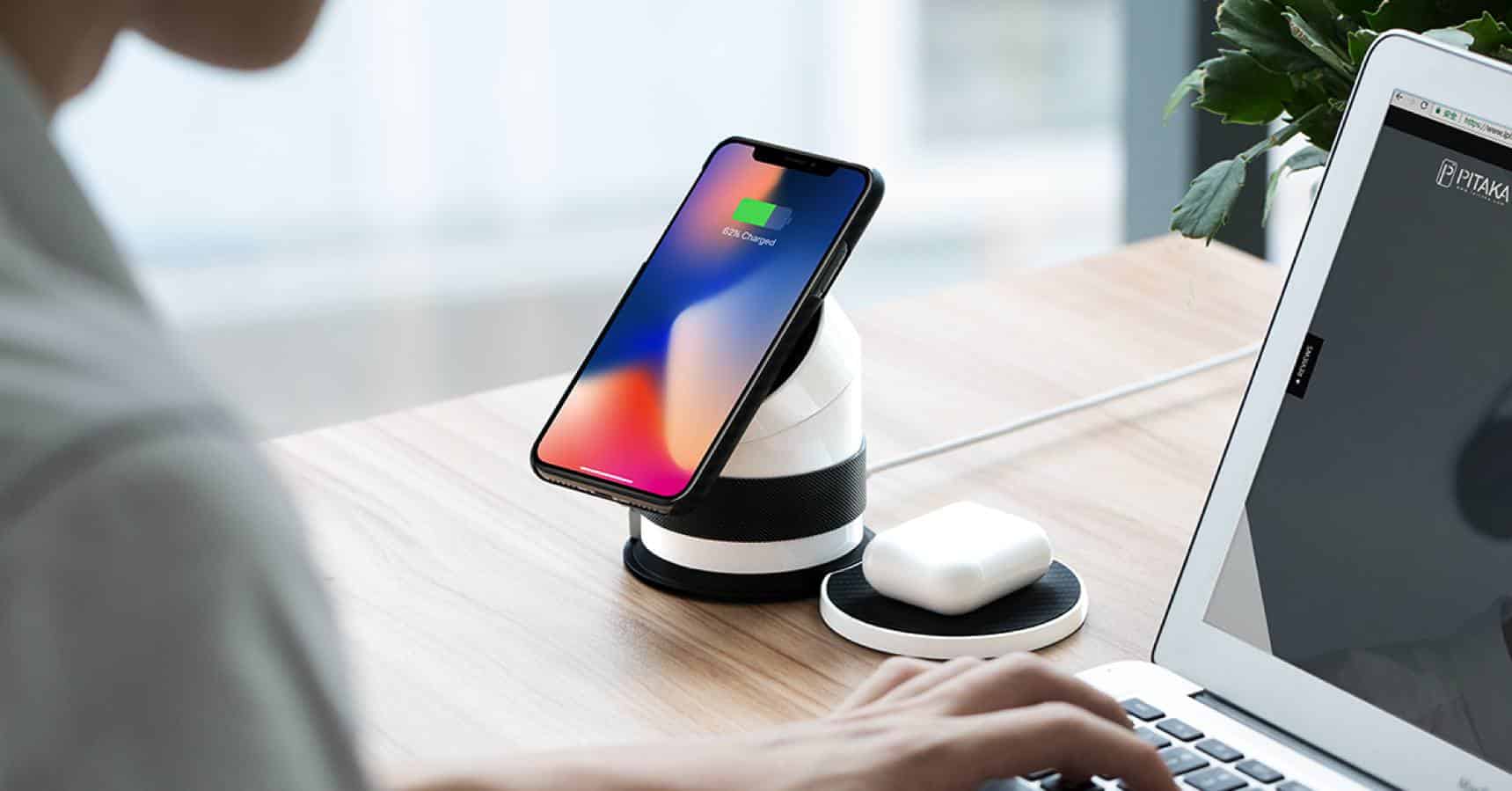 Image: Pitaka
The Good
The twistable top design transforms the charger into a stand
Magnetic lock so your phone doesn't miss a charge
Being able to charge both an Apple Watch and iPhone at the same time
The additional 7800mAh battery is a nice touch
The Bad
Honestly, I really can't find anything negative to say about this device.
8.5
Overall

I own a lot of Apple stuff. For starters, I rock an iPhone X. I also own an Apple Watch. And like any good Apple fanboy, I have a pair of AirPods (I swear, I’m not a fucboi). Sure, they’re all great devices, but when it is time to charge all of my various devices, the experience can be anything but great.

Since owning an Apple Watch, I have become extremely reliant on it for checking my notifications. When I have to take it off to charge, I have to rely on my iPhone like some sort of caveman. I mean, sure, this is expected, and it only lasts about an hour or two until the watch is all charged up, but it’s a constant nuisance I have to deal with on a daily basis.

Pitaka to the rescue

Thankfully, that’s all changed because for the past couple of weeks I’ve had my hands on Pitaka’s new MagDock. It’s an all-in-one dock that can charge all of your mobile Apple devices (iPhone, Apple Watch, and AirPods) at the same time, without having to plug a damn thing in.

You might be thinking to yourself: “OK sure, it’s just another wireless charger,” and, for the most part, you’re not wrong, but this is one you’ll actually want to use. Heck, you need to use if you own two or more Apple devices.

When it comes to most wireless chargers, you have the lay the phone down. So anytime a notification pops up, you’ll have to pick up the phone, unlock it, and then swipe up or down to see your notifications. It takes a total of like three seconds of your life. Truthfully, as a red-blooded-American who’s extremely online, ain’t nobody got time for that shit.

What the Pitika MagDock does right is that it utilizes an innovative twistable top design. Meaning, it acts like a stand where you can angle your phone in the best viewing angle. So instead of laying it flat down on a charger, it’s positioned vertically in the perfect position. It gets it so right that when a notification pops up on my phone, all I have to do is just glance at my phone and Face ID automatically unlocks my phone allowing me to see what the notification is all about.

And with most wireless chargers, if you move the iPhone a smidgen of an inch off the charging pad, the phone won’t charge. Pitika slapped a magnet within the device that auto-aligns your phone once your phone is placed on the dock, keeping it securely in place.

Another clutch feature is the on-board 7800mAh battery. It doubles as a portable battery charger. Meaning you can charge any of your Apple devices while you’re on the go. Whether it be if you’re traveling, procrastinating at a coffee shop, or while taking a doo-doo at work; you have that option. However, the unit I received didn’t have the external battery, but a battery is a battery, so you get the idea.

When it comes to charging the Apple Watch, it’s about the same experience you would endure with any other Apple Watch charger. The only difference with this is that instead of laying it flat, you’re laying the watch on its side. It’s nothing groundbreaking, but the main takeaway is that you can charge both your iPhone and Apple Watch all at the same time. Pitaka’s MagDock supports all of the Apple Watch Series’ and fits most cases and bands, as well.

What about the AirPods?

Instead of an AirPod charger, the company lets you buy additional pads to attach to your MagDock, you know, just in case you’re the type of monster that needs to charge two phones at the same time.

Additionally, for some reason, the device even has its own companion app for iOS and Android, and it allows you to keep tabs on your charging status. It also sends you alerts when your MagDock battery is running out of juice or whenever it gets unplugged. Do you really need it? Probably not, but I guess it’s helpful and an added nice touch.

Pitaka’s MagDock rules. Again, I didn’t have the built-in 7800mAh battery pack with my review unit, but honestly, that didn’t even affect my overall thoughts on it. Like, I have gotten so used to it, my previous wireless charger is just pathetically sitting there, wallowing in self-pity, patiently waiting for its turn again.

The main takeaway here is that can charge your Apple Watch and iPhone at the same time. Sure, if you perform a simple search on Amazon, there are devices like this for days and days, but no one is doing it better than this. The twistable top design owns. The magnetic locking feature is a nice touch. And the Apple Watch charger is, well, it’s just an Apple Watch charger. But overall, this is a solid device when you factor in the additional battery back.

If you’re someone who sits at their desk all day and owns two or more Apple products that can wireless charge, I totally recommend scooping one of these puppies up.

The Pitaka MagDock is available is currently available to pre-order on Kickstarter.

The Good
The twistable top design transforms the charger into a stand
Magnetic lock so your phone doesn't miss a charge
Being able to charge both an Apple Watch and iPhone at the same time
The additional 7800mAh battery is a nice touch
The Bad
Honestly, I really can't find anything negative to say about this device.
8.5
Overall
Related TopicsAirpodsApple WatchGadgetsiPhone XNewsPITAKAReviews