There’s a certain folding smartphone that absolutely no one needs.

So, we ask: Do people really need folding smartphones?

Okay, let’s address the elephant in the room. Do we really need anything other than food, water and maybe a dry place to sleep? Wait… ignore this, I’m sure Curtis will expound on this in some roundabout way involving sex toys and VR.

See, folding smartphones are just tablets you can fit in your pocket. Do you really need a tablet? Once you get to that size, aren’t you better off buying a damn laptop that actually runs a good OS and doesn’t hamstring you with Android or iPadOS?

Matt: I thought that, but then I tried the Huawei Mate X. It’s bonkers.

Curtis: Yeah but do you need it? Is there something you do that would make you say, man, I really needed this phone?

Joe: Sure, and so did the touchscreen phone but who would want to carry this monstrosity? Oh, and there was the LG PRADA (which I owned for a while), which came out the year before the iPhone… It was also similarly terrible, btw. iPhone just made everything touchscreen, so the next time you have to use a disgusting touchscreen at a fast food joint, thank Apple for your salmonella.

Curtis: But yeah, the entire scope of the phone changed. A phone that folds into a tablet doesn’t change anything. I mean, besides perfecting the technology for folding screens applicable in other industries.

Kevin: I’m with you, but what if it does? Like, imagine folding phones replacing laptops.

Curtis: You mean as tablets did. Then became laptops. Sure. Ok.

Kevin: I’m not disagreeing with ya, but if the right folding phone or tablet comes out, it may change things. Who knows though.

Joe: Aren’t folding phones or tablets just smaller laptops? We have UMPCs already, they’re a tradeoff of usability vs size. I mean, I love them but I’m in the minority.

. I think it’s a great design tool and overall tablet. But once it’s clicked into a keyboard, it’s a laptop (effectively). Hasn’t really changed computing, just how we access it physically. Once the phone is unfolded, it’s a tablet. Nothing has changed.

The folding motion is a gimmick, so we can fold a tablet into our pockets. Great. But doesn’t fulfill a need. It’s creating one, then filling it. My problem with big tech for a while. And not a single tablet released in the last six years can beat my PC, which I’ve had for six years. So until that happens, they are toys. For consumption.

Matt: Possibly. I travel a lot with work (last year I was on the road for three months out of 12). I use an iPad for much of my writing when away from my desk. A foldable phone would essentially allow me to consolidate everything into one device.

Curtis: Yeah but do you need it? Is there something you do that would make you say, man, I really needed this phone. Also, HOW DO YOU WRITE ON AN IPAD? My wpm drops from like 100 to like 25 on a tablet.

Matt: I use a Logitech Slim Combo keyboard, which is amazing. This is how I stay productive when flying economy. Just get an iPad

and a decent tablet keyboard

Joe: Wait, the keyboard I can understand. How do you put up with iPadOS as a productivity tool? Isn’t it easier to just scribble on napkins like a normal air traveler?

Curtis: I guess, my writing is mostly streams of consciousness so I need a keyboard. Yeah, see – you use a keyboard. So we’re back to laptop with a really small monitor.

Matt: Nothing wrong with that. The 11-inch MacBook Air

was a brilliant machine that never should have been discontinued.

Curtis: Nothing wrong with that is my point. I would love, LOVE, a folding monitor that I could put in my laptop bag and use as a second standing monitor when traveling, and that’s the one thing I do like about Microsoft working on a folding phone, that that might become a reality.

But other than that, a folding phone is just another tablet that eventually becomes a laptop when actually used for something other than consumption. And since 99.99999% of consumers just consume, I guess that’s ok.

, but it’s such a ball-ache to travel with. Side note: my foldable monitor is from a Kickstarter that didn’t actually produce anything. So I’ve got a device that people who paid for it don’t. That makes me feel extremely icky.

Joe: I really want an Augmented Reality headset that is light enough to carry around, so I don’t have to worry about needing a laptop with a screen large enough. I can just Bluetooth a keyboard to my phone and use the glasses for multiple desktops. That’s the dream, and with AR getting cheaper and more miniaturized, it’s closer than ever.

Curtis: People clapping a stylus that works in excel makes me cringe. I need at least 16GB of RAM to handle the shit I do in Excel. So yeah, I’m a lot more critical of consumer tech because I view it from a business productivity standpoint rather than just a “oooo this is neat” standpoint. I’m done with neat. Neat isn’t changing anything, isn’t improving anything. It’s just selling more shit to more people more often.

Matt: People clapping at launch events is weird, period. It’s such an American thing, and it makes me cringe so hard my bumhole does a little whistle.

It’s funny, Matt, because you can tell Americans are kind of over it now and there is this weird song and dance at events now – *do we clap now?*

As far as folding smartphones – no, people don’t need them. Will they gain enough usability to justify a purchase in the future? Quite possibly. I’m not sure anyone realized the impact just literal mobile phones (think early Nokia) would have in the grand scheme. That’s a more broad example than a literal folding smartphone, but I think the point stands.

That being said, I do agree with Curtis in that the impact might come in the form of folding screens as a concept, not actual folding phones.

*hops out of car*

I don’t get it, so are these just like flip phones again or what?

Joe: Ah it’s nice of you to join us, since Curtis is speaking sense for a change we needed the Luddite viewpoint. Yes, they’re just like flip phones, but made out of materials that break when you look at them funny. 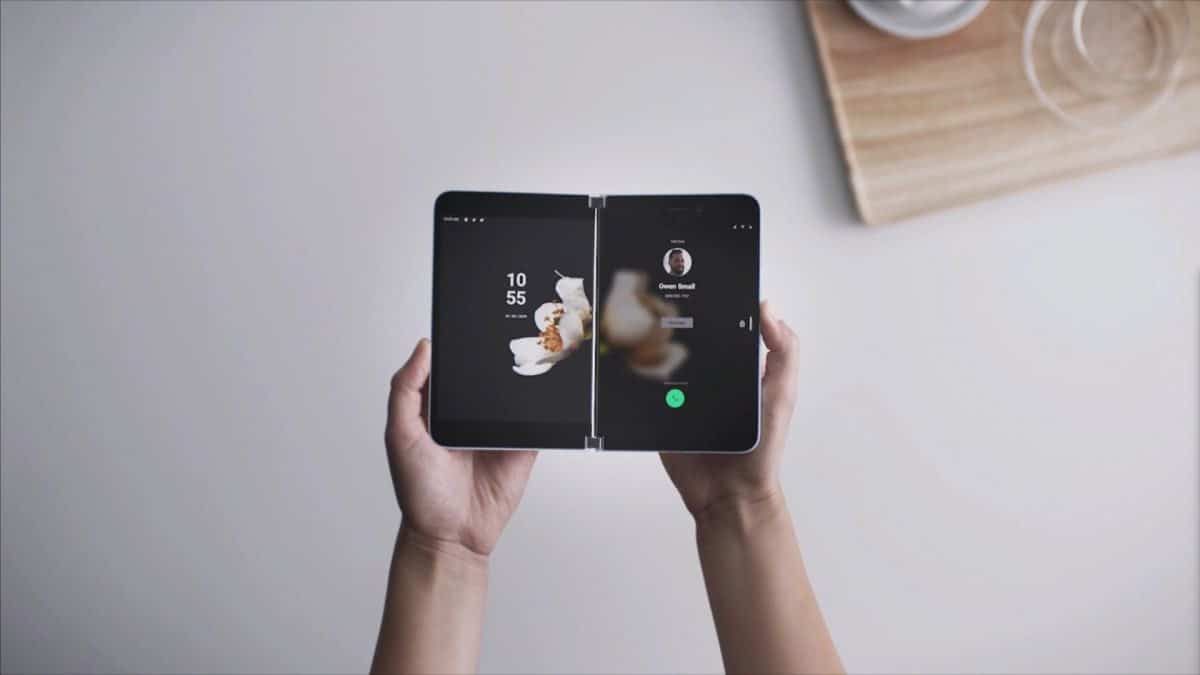 I don’t know if folding smartphones will ever be a thing, but man, if they look anything like this Surface Duo, then sign me the fuck up. Seriously, look at this thing. It’s absolutely amazing. Now, ask me about Samsung’s Galaxy Fold and you’ll get an entirely different answer. That monstrosity of a smartphone should have never seen the light of day, but I guess that’s the price you pay for being the first to market.

But anyway, do people actually need folding smartphones? No, not now. But, if enough of these are thrown are made and thrown into the wild, maybe developers will actually start to create apps that make them actually useful. As this Verge post points out, folding phones will live or die by the apps. And I kind of have to agree with that. The iPhone wouldn’t be where it is today without its apps.

The cellphone market is all about functionality at this point. Apple’s new iPhone pitch touts the triple camera. Samsung’s Note 10

is all about raw power. LG toots its horn over the audio in their devices. If Microsoft only focuses on folding phones, they’ll probably find a niche, if they support it long enough. Their track record speaks for itself.

Samsung’s Fold is a failed abortion of a device though and will absolutely make others think twice before making one.

I have way too much experience with the phone market. Do people want folding phones currently? No. Do they need them? Absolutely not.

Do you think the human race really needs folding smartphones? If you have any thoughts or suggestions, this is where you come in. Let us know down below in the comments or carry the discussion over to our Twitter or Facebook.