Survey reveals that parents share too much of their kids online, according to teens

I wrote an article once (I’m not sure of the exact context or content as it could be over a decade old and I can’t freaking find it), that lamented our oversharing of our children online. Personally, I never share pictures of my children and only refer to them by their ages. But if you’ve been on Facebook in the last hour, or any moment during the beginning of the school year you’ve seen countless pictures of kids at every stage of existence, from birth to college.

This is a problem. It was a problem a decade ago and it’s a problem now. It’s parents robbing children of the privacy of their youth by sharing everything online as if anything their child is doing is unique or special. It’s not. Your child is not a special snowflake. Your child is just another meaty human doing meaty human things.

Until a certain age, children had absolutely no say in what was shared about them online. Parents just share. I’ve seen a fucking baby before, I don’t need to see yours. I’ve seen kids go to school, play sports, perform terribly in the chorus concert. Those things are your memories to be shared with your family. I simply don’t give a fuck. Many of us don’t give a fuck.

And now some of those children that you’ve been sharing online since birth are growing up and realizing that not only have they had no control over their own lives in this social media world, but they are not happy about being your pawns in creating your online persona of a perfect parent. According to a recent Microsoft survey, teens are not only aware of the amount of private life they have lost to their parents’ social media but feel it is way too much. 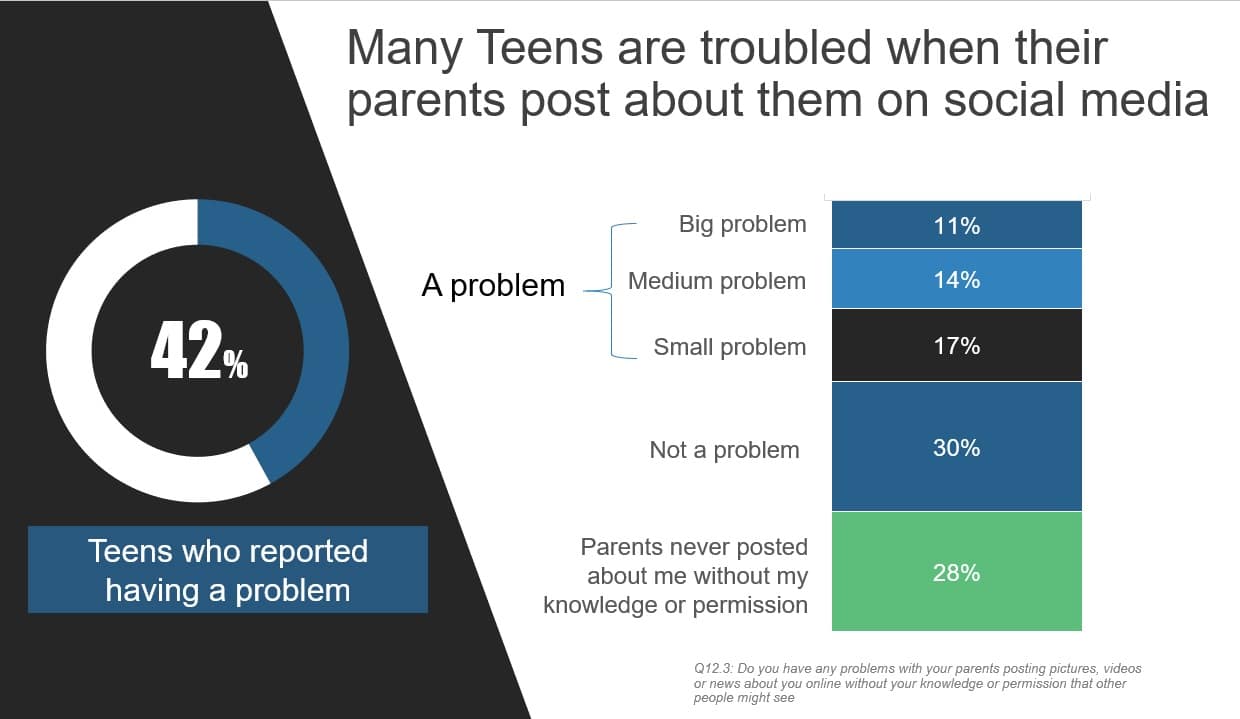 Additionally, 66% have fallen victim to some sort of online risk, likely due to having their lives already on the internet before they get a chance to tailor their social media persona for themselves. While there is no direct correlation between parents sharing online and the risk that teens felt, cynics like me have long warned of that connection.

Teens count on their parents for help navigating this online world. Nearly half of teens surveyed (48%) reached out to a parent concerning online bullshit. The problem is (and I swear I’ve written an article about this to, but damned if I can’t find it) that parents are just not aware of what their teens are doing online so are generally at a loss to help. Instead, they just post back-to-school pictures on Facebook and go about their day, ignorant to the real dangers of leaving out this part of a child’s education.

The thing is, humans are selfish creatures. The sharing of our children’s lives online stems from this inherent trait. I did write an article once about the meaning of personal data, and how we need to explain that to our kids. But if parents are too busy fluffing up their own lives, constantly and willfully ignorant about apps like Snapchat, Tik Tok and so on, kids will continue to be forced to navigate these applications alone.

Parents have created a world in which their children are already known by revealing information about them that they themselves would have never wanted revealed. For all the hand wringing about Facebook and data privacy, parents sure do share a lot about their kids. Be proud of your child’s accomplishments, sure, but that doesn’t mean I need to know every fucking detail about them. Create a private group with your family, share it there, not publicly.

But it’s too late for lessons for parents on how to manage their social media sharing. They’ve done fucked up already and teens, who were infants when their parents started sharing their lives, have taken notice and are not pleased. They were not given the choice, any choice, in how to become a full-grown person online. Since birth, they have been plastered on Instagram, Facebook, and Twitter, their personal identities stripped of any privacy by their own parents.

While it’s important to know everything you can about what your child is doing online (not every single detail, you have to give them some space, just the apps at least) it’s also important to give them the freedom to remain anonymous. And many parents have stripped them of that. They have not given their children the same choice they had when social media rose to power, to hold our lives close and share only with those closest to us. To be able to decide our social media fate. For many kids, now teens, it’s too late. They are out there. They exist in more spaces and databases than they can even fathom.

I could go on and on about this, but the point of the survey is clear

While parents thought they were acting in some sort of weird altruistic, unknowingly selfish action, they have torn away the privacy their children now wish they had. Teens who have been online since babies are facing a world that already has a parentally-skewed vision of who they are and have to work twice as hard to become and show people who they actually are.

So think twice about sharing your kids’ faces and information online. Perhaps just mail the school photos to Grandma like we used to do. Just for a while. Just until children are old enough to decide for themselves how much of and what aspects of their life they want online.

What do you think? Are you guilty of this? Let us know down below in the comments or carry the discussion over to our Twitter or Facebook.