The alternative is having to talk to your older relatives and we all know you don’t want that.

The holidays are upon us! That means some of us will be finding ways to fill the void while the Boomers bitch about Millennials and how “the Liberals” are trying to impeach their favorite sub-human president.

If you are like me, you’ll be taking every opportunity to fill this family time by playing some group party games with the kids, cousins or siblings. Problem is, there are just so many games out there, are you going to play Super Smash Bros. Ultimate again? Fresh is best and here are four games you can take your friends and relatives to task with this holiday. 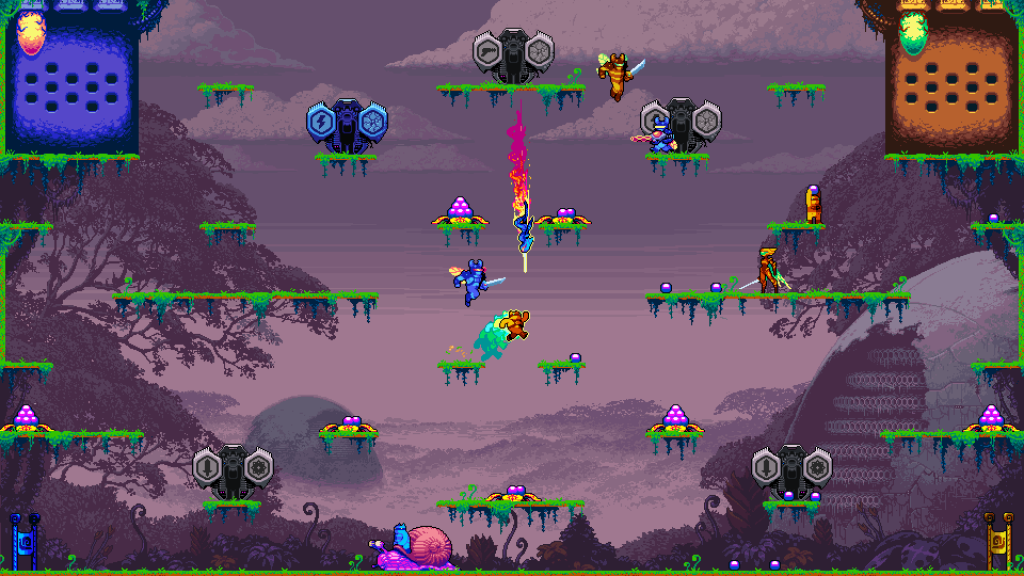 The console version of the unique arcade hit, Killer Queen Black is one part Joust, one part OG Smash Bros. and all fun.

What is Killer Queen Black? It’s a 4v4 strategic team platformer where you battle a rival hive for victory. You take control of your team’s queen, soldiers or worker drones as you try to work towards victory against your opponents. Winning comes in three flavors by either riding the snail into the enemy base, killing their queen three times filling your nest with berries first. Action is fast and frantic and ideal for couch play.

Killer Queen Black allows for four players to take part in the insanity locally or up to eight with network play or if you have two Nintendo Switch consoles. With cross-platform play, Switch, PC and Xbox players can all get in on the fun. That means that even if you are across the world from friends and family, you can still get some Killer Queen Black matches in. Plus, the physical edition comes with a really neat controller skin, if that’s your type of thing.

This holiday you can get super handsy with your friends and loved ones in Heave Ho and you won’t even end up in trouble, on a list or in the plot of Curtis’ favorite adult video genre.

Heave Ho is an interesting game. Up to four players take control of a disembodied head with individually controllable arms. The name of the game is to get from the start to the goal by flinging your friends, grabbing walls and generally screwing with game physics. That’s what you do if you want to succeed, but you can also screw with other players by letting them go at inopportune times, dropping them into traps, pits and more. The level isn’t over until all players end up at the goal, so prepare to get extra grabby.

What makes Heave Ho especially fun is that there really isn’t a time commitment to play the game. When you are ready to play a few levels, it’s simply a matter of handing out controllers and getting the party started. Levels don’t take more than a few minutes and you can drop in or out without much issue.

Heave Ho is available on the Nintendo Switch, PC, and macOS. You’ll probably be playing on Switch unless you feel like lugging a PC with multiple controllers around.

Who doesn’t love some 8 and 16-bit nostalgia? How about at least an entire weekend of well thought out party games that up to four people can enjoy? Mario & Sonic at the Olympic Games Tokyo 2020 has you covered.

Mario & Sonic at the Olympic Games Tokyo 2020 allows you to take some of your favorite Mario and Sonic the Hedgehog characters and compete in events from the 1968 and the 2020 Tokyo Olympics. With these games ranging from those newfangled 3D graphics or old-school 8-bit nostalgia, anyone that understands what a game system is can get in on the fun.

We discussed it more in detail in our earlier review, but Mario & Sonic at the Olympic Games Tokyo 2020 has plenty of options that will let players young and old alike enjoy this game. With super-easy Switch controls and a smorgasbord of games to play, this is going to be a major holiday time killer!

Have you had a few drinks and board games sound like a good time? Wanting to play party games and you don’t have any extra controllers to go around? Want to stun Grandpa and Grandma with your technical prowess while playing party games with relatives across the world? It sounds like Jackbox Party Pack 6 is right up your alley.

If you’ve been living under a rock for 6 generations of the Jackbox Party Pack, do I have a pitch for you. The Jackbox Party Pack 6 allows up to ten players to play up to five party games with anyone that has a smartphone, computer or tablet. These games range from making up bogus definitions for words to trying to survive mini-games with varying goals and drawing the inevitable picture of a penis. Trust me, it’s going to happen.

Jackbox Party Pack 6 is literally available on almost everything. This includes all game consoles, PC, macOS, the Play Store, the App Store, and Samsung Smart Fridges.

These four games should give you enough flexibility and variety to keep yourself out of trouble this year when your weird uncle decides he wants to have everyone go out front to look at his MAGA flag. Instead of having to “make the whole evening uncomfortable again” you’ll be busy having a great time! No need to thank us, we’re doing this for you!

What do you think? Plan on trying any of these games out this holiday season? Let us know down below in the comments or carry the discussion over to our Twitter or Facebook.