Does anyone really need a back screen though? 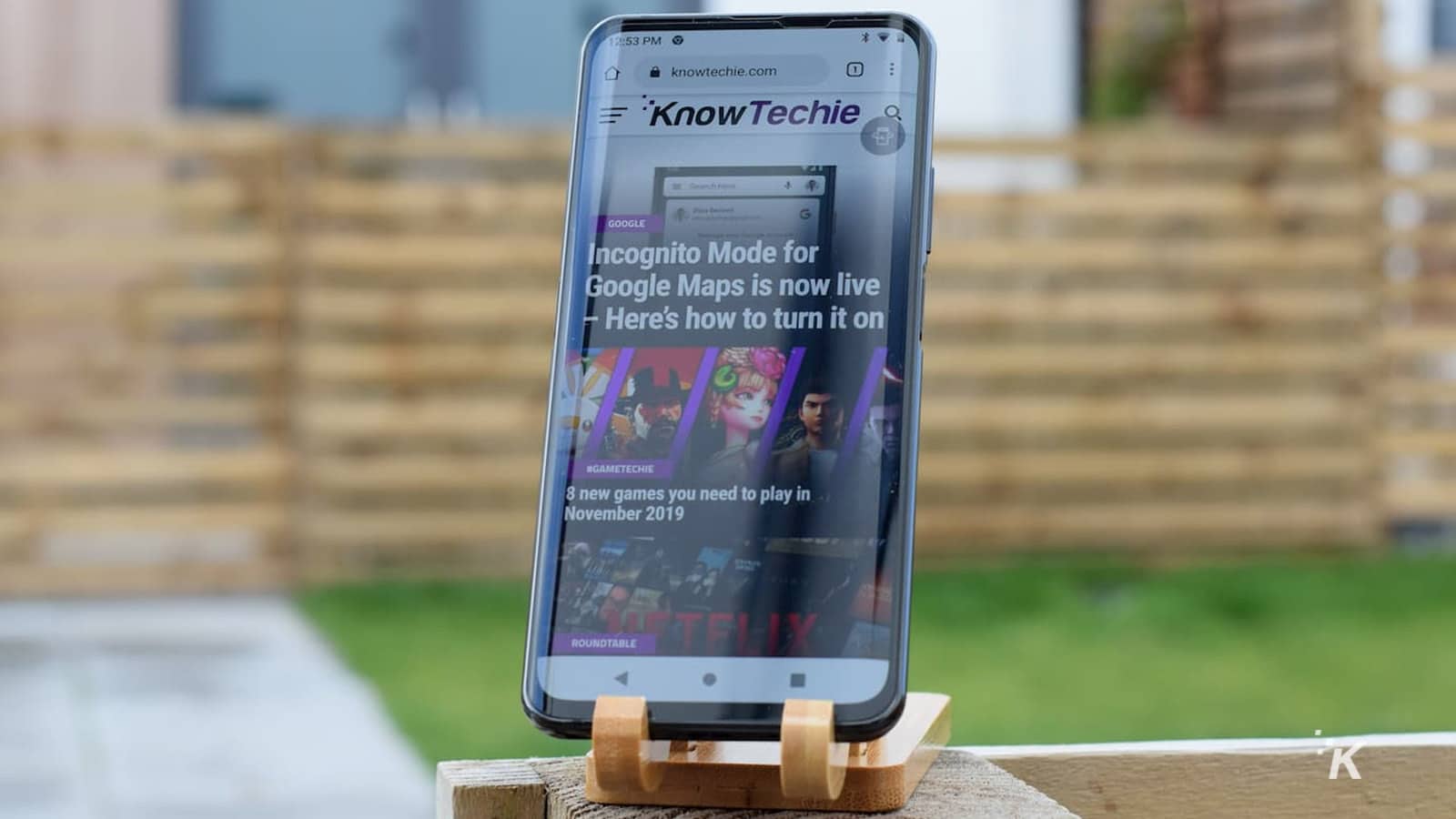 Image: Matt Hughes / KnowTechie
The Good
Powerful
Pretty
Imaginative
Decent camera
The Bad
Second screen feels a bit pointless
Almost impossible to use a case
The back is a fingerprint magnet
7
Overall

Traditionally, the most intriguing and creative phones were the ones with the highest price tags. In 2019, that just isn’t the case, as demonstrated by the surreal ZTE Nubia Z20.

This handset (which has a price tag of $550-650, placing it firmly within the middle of the smartphone pack) is unique for several reasons. Chiefly, it contains two displays, with one on each side of the device.

Dual-screen phones are by no means unique, and several manufacturers have tried to commercialize this unique form-factor. Russian smartphone brand Yotaphone released three devices with the front display accompanied by a rear e-ink screen. It released three models (all selling poorly) before the company evaporated into bankruptcy earlier this year.

And while I don’t believe the Nubia Z20 is likely to emerge as 2019’s smartphone dark horse, achieving overnight commercial success in a skeptical market, I do think the device shows promise. It’s surprisingly well-polished, with few signs that ZTE cut corners to keep the price low.

The only thing it’s missing? A raison d’être.

For a device with an unambiguously mid-range price tag, I was decidedly impressed with the ZTE Nubia Z20’s internals, which delivered a lag-free and smooth day-to-day experience. Here are the Cliff’s Notes:

As you’ve probably observed, there are few blatantly-cut corners here. The biggest delight is undoubtedly the Qualcomm Snapdragon 855+ platform, which delivers overall improved performance that’s most keenly felt when performing visually-intensive tasks (like a casual game of PUBG Mobile) and AI applications.

The entry-level model comes with 6GB of RAM, which isn’t precisely industry-leading (the mega-pricey Samsung Galaxy Fold, for example, has 12GB) but should be perfectly adequate for most people. That said, die-hard gamers and unrepentant multitaskers would be well-advised to get the slightly pricier 8GB version, which promises an overall smoother experience.

Purist Android fans will enjoy the relatively untouched experience offered with the Nubia Z20, which runs Android 9.0 running Nubia UI 7, which is one of the most hands-off Android skins I’ve ever used. The only area where it differs from the stock Android experience is that it includes software to handle the dual displays and fingerprint readers.

Rebel without a cause 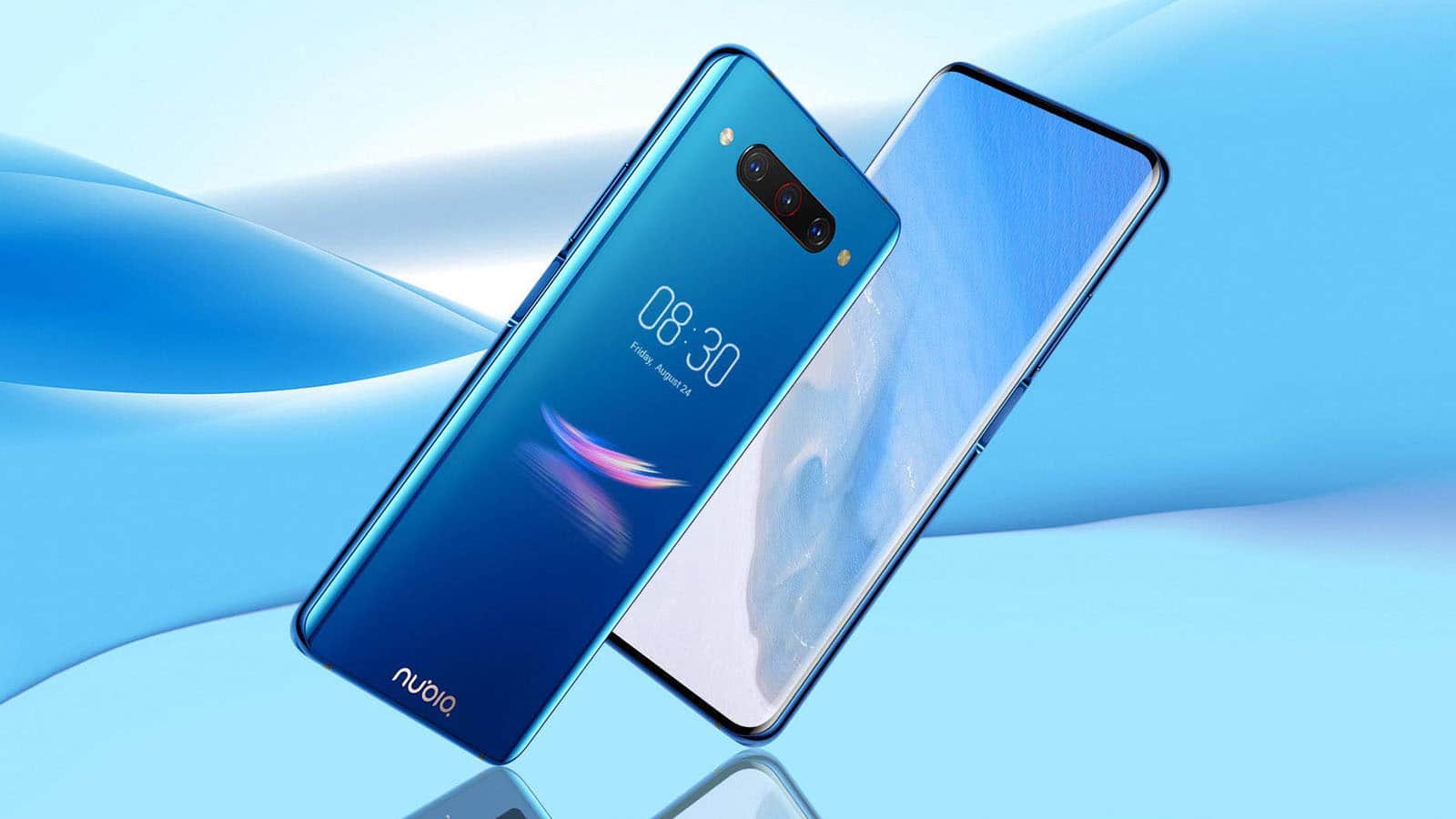 My experience reviewing mid-range smartphones (and I’ve been in this industry for about eight years) is that they typically fall short in the looks department, as vendors emphasize delivering the highest amount of power for the least amount of money.

The Nubia Z20 is different. The display consists of an unbroken rectangle of AMOLED. It’s lusciously bright, rated to 600 nits at max brightness, and has excellent color reproduction. Furthermore, as a long-time notchphobe, I’m delighted to report there are no awkward bumps of plastic getting in the way of the screen.

Flanking the main display are two separate fingerprint readers, which allow both left- and right-handed users to log-in to their devices by using their thumbs. In my experience, these were delightfully responsive, accurately authenticating me in less than a second.

The second display is almost invisible when not in use. It blends effortlessly into the rear of the phone. To activate it, you merely need to press a virtual button, which follows you through the phone. This design lets you spontaneously switch environments.

It’s worth noting that the rear display isn’t quite as good as the main one. Rated to roughly 300 nits, it’s half as bright as the primary screen, and colors appear washed-out. Ultimately, you’re only likely to use this feature in spurts as you try to accomplish something, rather than as your day-to-day phone environment. 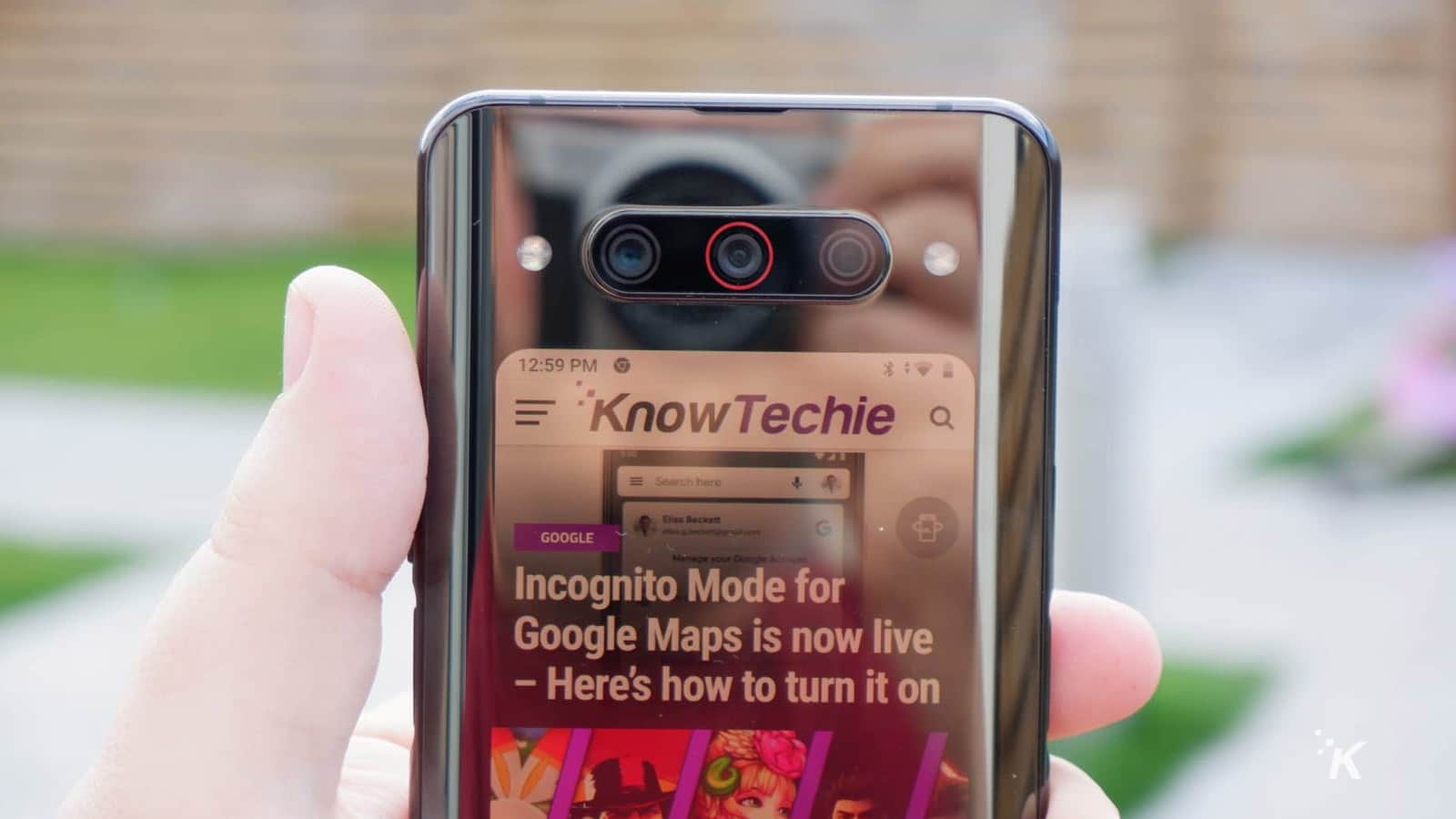 Fair warning: The rear display is a fingerprint magnet. If you use it with any degree of regularity, your phone will look like a greasy mess, not unlike a public iPad at a McDonald’s restaurant. This design also makes it tricky to use a sturdy protective case, like those from Mous or Otterbox.

ZTE includes a free silicone case with the phone, which mitigates against this problem – kind of. It’s thin enough for presses to register through the polymer barrier, but using it feels unpleasant. Furthermore, it’s not nearly thick enough to offer protection against drops and prangs.

So, why would you use the secondary display? The main reason is, of course, to take selfies using the phone’s constellation of primary cameras. And while it delivers on this with abundance, I did find myself scratching my head for alternative use cases. I couldn’t come up with any. 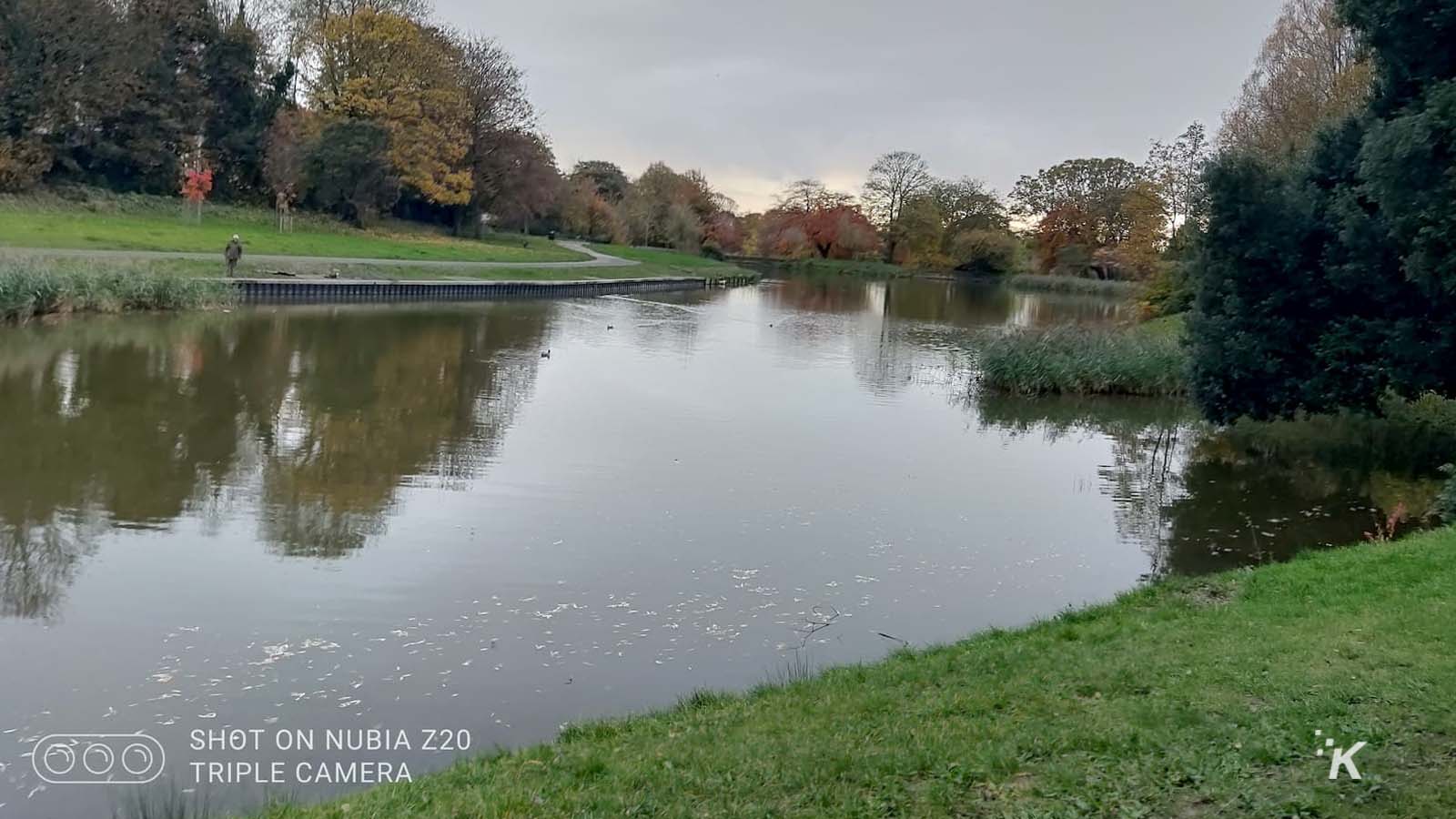 Let’s touch on the camera. As is so frequently common with contemporary mid-range phones, the Nubia Z20 uses Sony’s 48MP IMX586 sensor for the primary shooter. In practice, it doesn’t produce photos that are 48MP in size.

That’s because it uses a technology called “pixel binning,” where smaller pixels are amalgamated into bigger ones, thereby producing shots akin to what you’d get with a 17MP camera.

In general, I was satisfied with the quality of the photographs produced by the Nubia Z20.

Although it didn’t meet the high visual standards set by loftier (and more expensive) phones such as the Huawei P30 Pro, iPhone 11 Max Pro, and the Samsung Galaxy Fold, ZTE’s latest phone did an admirable job. Color reproduction was reliable, while my shots managed to preserve finer details, despite the arduous lighting conditions. 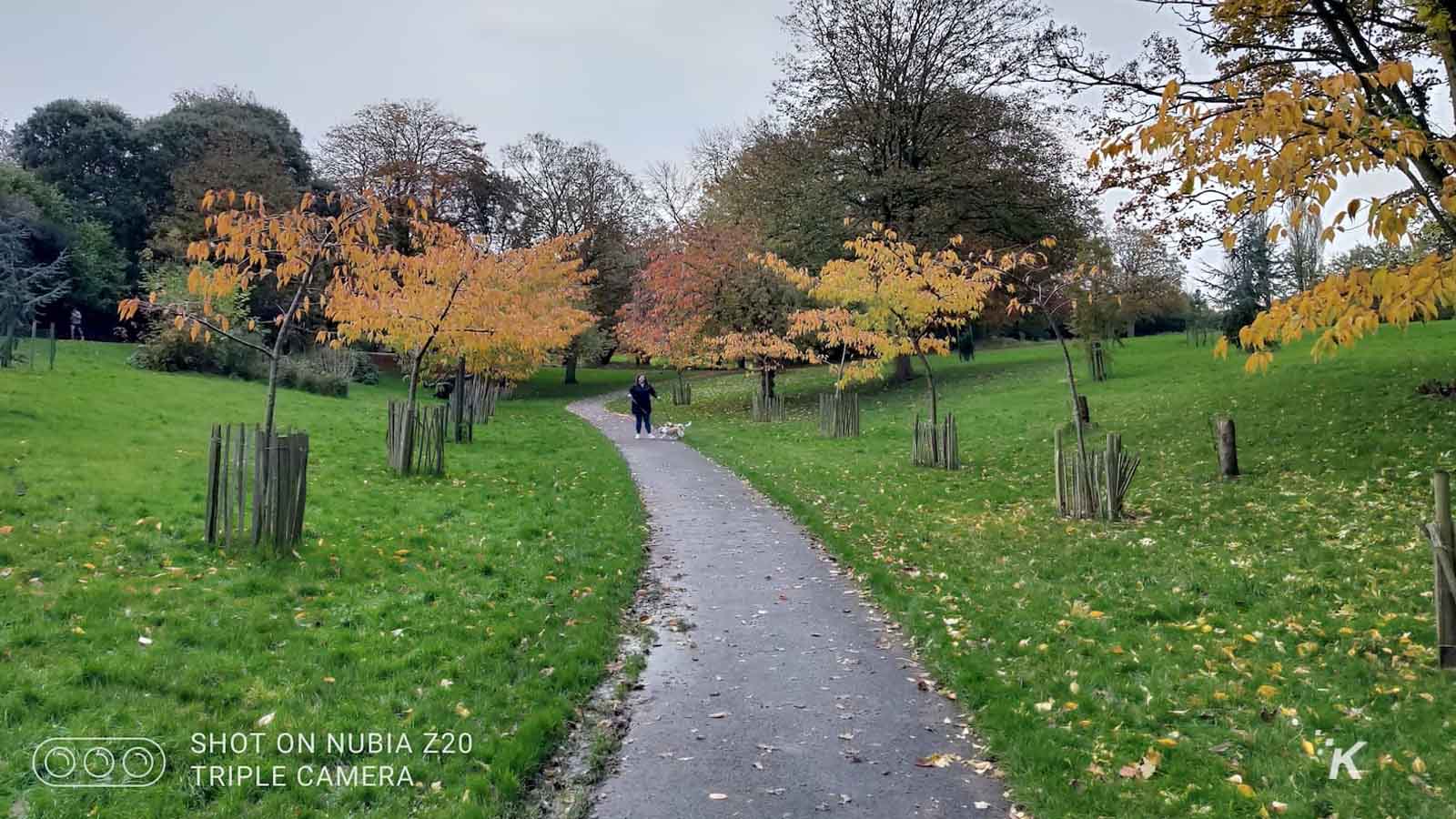 I was also reasonably impressed with the camera app, which offered a decent array of features and modes, including one that lets you take dazzling light painting shots.

However, it did let itself down by watermarking all my photos with an advert for the Z20, which could only be removed by delving into the settings. This setting felt a bit gratuitously cheeky, and although you can deactivate it, you can’t retrospectively remove watermarks from photos you’ve already taken.

The Nubia Z20 is an ambitious phone. It accomplishes a lot at a relatively low price point and has very few areas of compromise. Its biggest problem isn’t execution, but rather that its standout feature lacks a use-case beyond taking selfies.

That’s it. And that simply isn’t a strong enough hook, especially when you consider how crowded the middle-range of the smartphone market is.

Ultimately, the Nubia Z20 is a good phone. But if it ditched the gimmicks (namely: the second display) and cut $200 off the price tag, it’d be an excellent phone – one I wouldn’t hesitate to recommend.