The best crowdfunding campaigns to check out in July 2020

With all of those campaigns competing for your attention, it can be tricky to find ones based on your interests. Let KnowTechie do all the hard work for you, with our picks of the crop for July.

Furthermore, if you think that it’s too hard to run a successful campaign on crowdfunding platforms nowadays, you should know that some new crowdfunding rewards automation tools, like Just Early Bird, are real game changers and can seriously boost your crowdfunding campaign on Kickstarter or Indiegogo!

Check out these 12 crowdfunding campaigns this month

So, with all of that out of the way, here are some of the crowdfunding campaigns I’ve found worthy of attention in July:

Ever looked at your Nintendo Switch and wished it would turn into an arcade machine? Well, for $110 you can do just that, with the Switch Fighter. It’s a dockable arcade console accessory for your Switch that will turn it into an arcade powerhouse, complete with a Sanwa joystick and buttons just like in the arcades.

Imagine playing Street Fighter II as intended, or Smash Bros. without those drifty Joy-Cons. What about putting your Switch into portrait mode and playing those classic bullet-hell shooters that Nintendo was so good at? Heck, you can even use it as a dock to recharge your Switch and play on your TV, while using those sweet arcade controls. Just… you’ll need an original Switch, as the Switch Lite won’t fit into the docking area.

It seems that e-bikes are all the rage these days, and there’s a new kid on the block, the $699 HiMo Z20. This dual-mode folding e-bike is just as comfortable on the commute (if you still have one of those these days…) or on the back trails, where you can use the electric assist to help you with the uphill sections.

You can switch between fully electric, electric-assist, or manual cycling at any time, and there are two preset levels for the assist depending on if you want a little bit of a push or a full-throttle experience. The motor works with a 6-speed Shimano transmission that can reach 15mph at max speed and has enough juice for 50 miles of powered riding. That’s pretty darn good, but what makes it even more special is the 47 pound weight, assisted by the aluminum alloy frame, that folds down for easy storage. 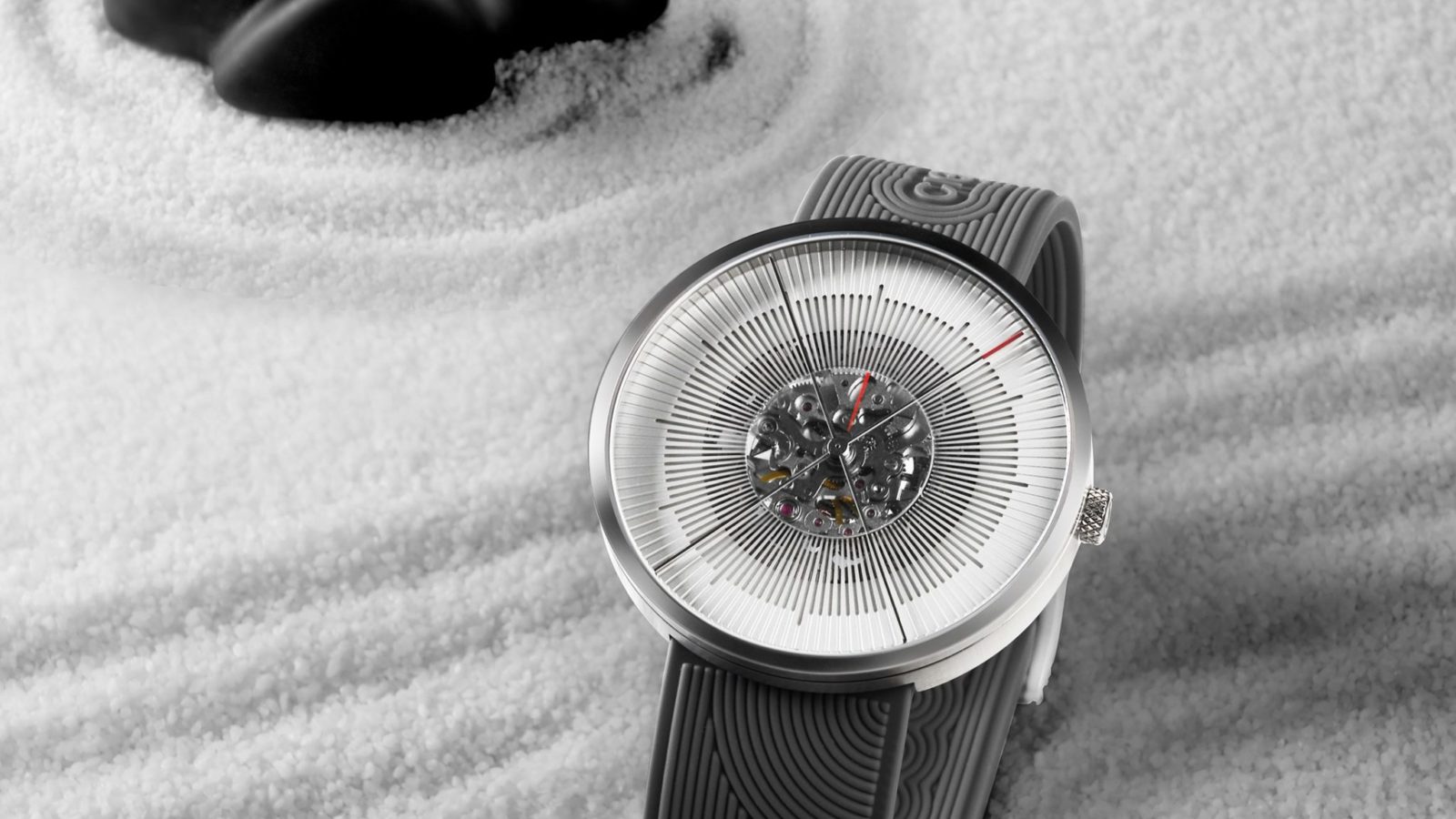 Love mechanical watches? Feel like you need a Zen way to escape from the daily stresses of our current existence? Of course, you do. CIGA Design is back with its J Series automatic watch, which lets you experience time through the fully-exposed mechanism of the engineering marvel.

The moving X created by the equal second and minute hands make it easy to tell exactly what time it is, while the shorter hour hand represents your being, perhaps signifying that while you are moving through time, your perception of it is more important than the actual numbers. All of that is powered by a custom Citizen movement, with 21 diamonds that give it 42 hours of energy storage even when unworn. And we all know that 42 is the answer to life…

Grab one for $369 while the super early bird pricing is still in effect over on Kickstarter.

What’s better than having a robot mow your lawn? How about having the cutest robot mower on the planet do it? Meet Toadi, the adorable robot mower. Unfettered by the usual inaccurate GPS navigation or annoying perimeter cables, Toadi is smart. Like really smart. It uses a 4K camera and lots of AI brainpower to navigate around your yard while chewing your grass to the perfect height.

The base Toadi can mow up to 0.6 acres of lawn, or there’s a Pro version that doubles that to 1.2 acres. That’s a lot of not having to mow your own lawn. The robot mower will recharge itself when running flat, and it will even avoid things on your lawn, like shoes or animals.

For just over $2,500 you can get the cutest grass mulcher on the planet, so head on over to Kickstarter.

Looking for a new speaker that’ll turn into a conversation starter? Maybe check out the UPstage180, which combines cutting-edge speaker technology with some sweet lighting effects, for a speaker that’s guaranteed to turn heads.

Oh, did I mention cutting-edge? I meant it, with a glass woofer and two ‘twofers’ which combine the audio properties of a woofer and a tweeter in one unit. That’ll make some sweet sound waves, for sure. It’s got Bluetooth 5.0, supporting LDAC hi-res audio, and can be chained together like TWS headphones, for stereo imaging. It’s got some pretty sweet lighting effects too, helping you get into the mood, whenever you want.

Grab one for $315 while early bird pricing is still in effect.

If you’ve been wanting to take advantage of how good the camera you carry around in your pocket is, but were scared of dropping your glass-covered device – the ShiftCam ProGrip is for you. It’s an ergonomic phone case/grip that is also a power bank, a wireless charging dock, and a nifty Bluetooth shooting button.

Oh, and you can rotate your phone into portrait mode, without having to also twist your wrist into that orientation. Nice. If you want more than just the ProGrip, there’s a range of options that come with accessories like ShiftCam’s well-regarded mobile lenses, a hotshoe adapter for lighting, and a handy hand strap that’ll save your device from a concrete demise.

Want to get into virtual reality but been put off by the bulky, fugly headsets? Well, maybe you’ll like the Cinera Edge, which slims down the traditional HMD into something that isn’t much bigger than a pair of headphones.

Using micro OLED screens, the Cinera Edge packs 2560×1440 pixels into each of your eyes, calibrated to the DCI-P3 standard that Apple uses for its Pro Displays. A staggering 500,000:1 contrast ratio is claimed by Cinera, which if it’s anywhere near that, will give you eye-popping visuals and blacks that make you feel like you’re sinking into them. Nice. Oh, and in case you were wondering how big the field of view works out at? It’s nearly as big as an IMAX movie theater’s screen.

Grab one for $449 while early bird pricing is in effect.

TaoPatch: Upgrade your brain and body

Feeling a little unbalanced lately? Got nagging aches and pains that won’t go away, no matter how much Icy Hot you slather on? Maybe the nanotech inside TaoPatch could help.

The Quantum Dot nanocrystals inside each patch convert your body heat into light, which then gets reflected back into your skin, to provide light therapy to your chosen pressure point. It’s all scientifically proven, in case you think this is all a bit hocus pocus, and each patch can last for two years before it loses its potency.

Listen, we know that access to quality freshwater is a difficult task for many people worldwide. Maybe Quench Sea can do something about that though, with its manually-activated desalination tool that turns seawater into freshwater, ready to drink.

Isn’t that freaking magical? I mean we have all that seawater out there that will make us sick if we drink it, and this low-cost tool can make it drinkable? Forget Indiegogo, this needs to be in every single lifeboat on every single seagoing vessel, in disaster preparedness packs, in humanitarian aid parcels, in freaking every place that it can be used.

Anyway, if you want your own before it becomes standard-issue, head on over to Indiegogo to grab a QuenchSea for $81 while the campaign is running.

Feeling drained mid-afternoon? What about not being able to drift off once you finally get the chance to crawl under the covers at the end of the day? Well, maybe some light therapy can fix what ails you, like from the Olly Day and Olly Night lamps.

These small, rechargeable lamps work in the same way but have completely opposite effects. Day gives you ‘an espresso shot’s worth of energy’ in a 20-minute session, apparently, and you don’t even need to clean out the espresso maker to get it. Night gets your body creating its own Melatonin, which aids you in falling asleep quicker, and hacks your circadian rhythm back to what it should be naturally. I wonder if multiple Day lamps will mimic a quad-shot…

Our necks aren’t all the same, so why are our pillows? Zerema aims to fix that, with its automatic height-adjusting smart pillow. Yes, a smart pillow, for smarter sleep. Isn’t technology great?

The smart pillow automatically learns your sleep habits, adjusts to suit, and can also detect if you’re starting to snore, and either raise or lower your head so your airway will be less obstructed. That’s what I call smart!

Maybe this means waking up with a stiff neck from improper positioning will be a thing of the past? Anyway, head on over to Kickstarter to check out the campaign.

Petpuls Smart Collar: Give Your Dog A ‘Voice’

Ever wondered what your dog is trying to tell you? Chances are they’re just asking for food/walkies/ear scratches, but maybe they’re trying to tell you something more important. Petpuls’ smart collar uses AI to determine if your beloved family friend is happy, relaxed, anxious, angry, or even sad.

What’s more, as Petpuls gets more training data from use, the AI gets better at recognizing your dog’s emotions, leading to a happier life for both of you. It’s also a full-fledged activity tracker, that can determine calories burned, activity patterns, and help you keep your pooch in shape. Nice.