Here at KnowTechie, we strive to bring quality images wherever possible, created by our writers. That means a ton of photography gear behind the scenes that most of the time nobody sees, unless it’s also something that we’re reviewing.

The first installment of our “Behind the Scenes” content took a look in my photography bag, where I went over my mobile kit. If you want to see the third part, you can skip ahead to that here. Now it’s time to look into the more permanent parts of my kit, with my studio setup.

Here’s all the gear I use to get the shot

One of the things to note for my studio setup is that it’s always in flux. Until I move somewhere that I can have a dedicated studio space, I’m limited to using other areas of my apartment on a temporary basis only. That really just means that my kit is more portable than it would be if I had a dedicated space always set up, although the main elements would be the same.

The most important piece of gear in-studio for me is a solid platform to put my camera on. If I’m doing macro work or focus stacking, I need my lens to be rock-solid. I was making do with a cheap tripod, but when I switched to full-time it was time to upgrade. The Manfrotto 055XPRO3 tripod was my first choice, as it’s solid, dependable, and has a nifty trick that lets you use the center post at 90 degrees to the rest of the tripod for things like overhead shots. There are many options for heads here, but I grabbed a combo with Manfrotto’s 502AH Video Head, as I wanted to practice video and I don’t like the geared heads in the other combos.

I might have changed my mind if I’d known how hard it was to find an arca-swiss compatible adapter to fit on the 502AH though. See, all my gear is on quick-release plates so I can swap between equipment easily. I did eventually find one that was only $40, but it would have been nice to use my existing stuff.

Other than that caveat though, it’s a solid combo. Extremely smooth movement from the fluid head and stable, adjustable tripod legs. It’s a great place to put my Movo X-slider when I’m not using the integral legs, giving me enough adjustment that I can always get it perfect to the angle I want. The best part about the X-slider for me? The weight. At just over 7 lbs, it’s light enough for on-location shoots, or if I want to hike into the local wilderness to grab some scenery shots.

I’ve also got a Trek motorized slider from Dyno Systems that I’m really enjoying with my recent switch over to an iPhone 11 Pro. Looking forward to using this more now that the weather is finally warming up.

Also, since my new camera just got a firmware upgrade for gimbal control, I’ve been playing around with the Zhiyun Weebil-S and its image transmission kit. Expect a full review of this soon, all you need to know is that it’s a fantastic gimbal for the price. The best part for me is how small it is, fitting easily inside my Hex DSLR bag so I’ve always got a stabilizer on-hand when I need it.

Mount all the things

The other important part of camera gear is the myriad ways that you can mount your gear onto your supports. My kit has grown over the years as I needed new things to do specific tasks, although I’ve got a good selection of general gear as well.

Mounting on the X-slider is handled either by a Z-mount like this one from ADAI, this Neewer ball-head, or the 502AH fluid head, depending on what I’m shooting with it. All of these also work with the Manfrotto 055XPRO3 tripod.

Any smartphone camera comparisons I do are handled by the $20 Livestream Gear – Dual Device Mounting Bar, which lets me mount up two smartphones almost from the same vantage point. It’s also got an additional mount point for a small light, in case I need extra lighting.

I recently upgraded to a Fujifilm X-T3 which is a huge step up from the Lumix G7 I was using. I picked it up with the superb Fujinon XF18-55 OIS lens, the battery grip, and more recently, the Fujinon XT60mm macro lens. I’m really excited about the macro lens and will be using it a lot on review images coming up.

I’m also finally a convert to the cult of Apple, after switching to an iPhone 11 Pro after a long string of issues with Pixel devices. One of the first things I picked up was the AquaTech AxisGO fully-waterproof case for underwater photography. The idea was to take footage of my little one learning to swim, but those plans are shelved for the short term as the current coronavirus pandemic means the pools nearby won’t be opening.

I also grabbed the Moon Ultra light, which fixes one of the main issues with mobile cameras – the LED flash is usually pretty trash. With the Moon Ultra, I can adjust my lighting between 5-400 lux, and 2700K (Tungsten) and 5000K (Daylight) so I can light my frames correctly. It’s also flicker-free for video use, with a couple of hours of runtime. Perfect for those Zoom video calls when you’re working from home as well.

I’m pretty excited about the switch to iPhone overall, as there’s a much more robust ecosystem for creators on the platform. From apps like Halide and Spectre, Quickshot and Pixaloop, to hardware like the Trek slider I mentioned earlier, there’s just more choice for tools. Apple goes a long way to make that possible, and the smaller pool of devices to develop for also helps.

You can’t pull great images without lighting, so this section is just as important, if not more so. I’m still using an aging CFL setup for most shots, which I really should upgrade to full LED lamps at some point. Mainly for setup time (screwing bulbs takes FOREVER), but also for safety as I really don’t want to have to pick up glass shards if something goes wrong. 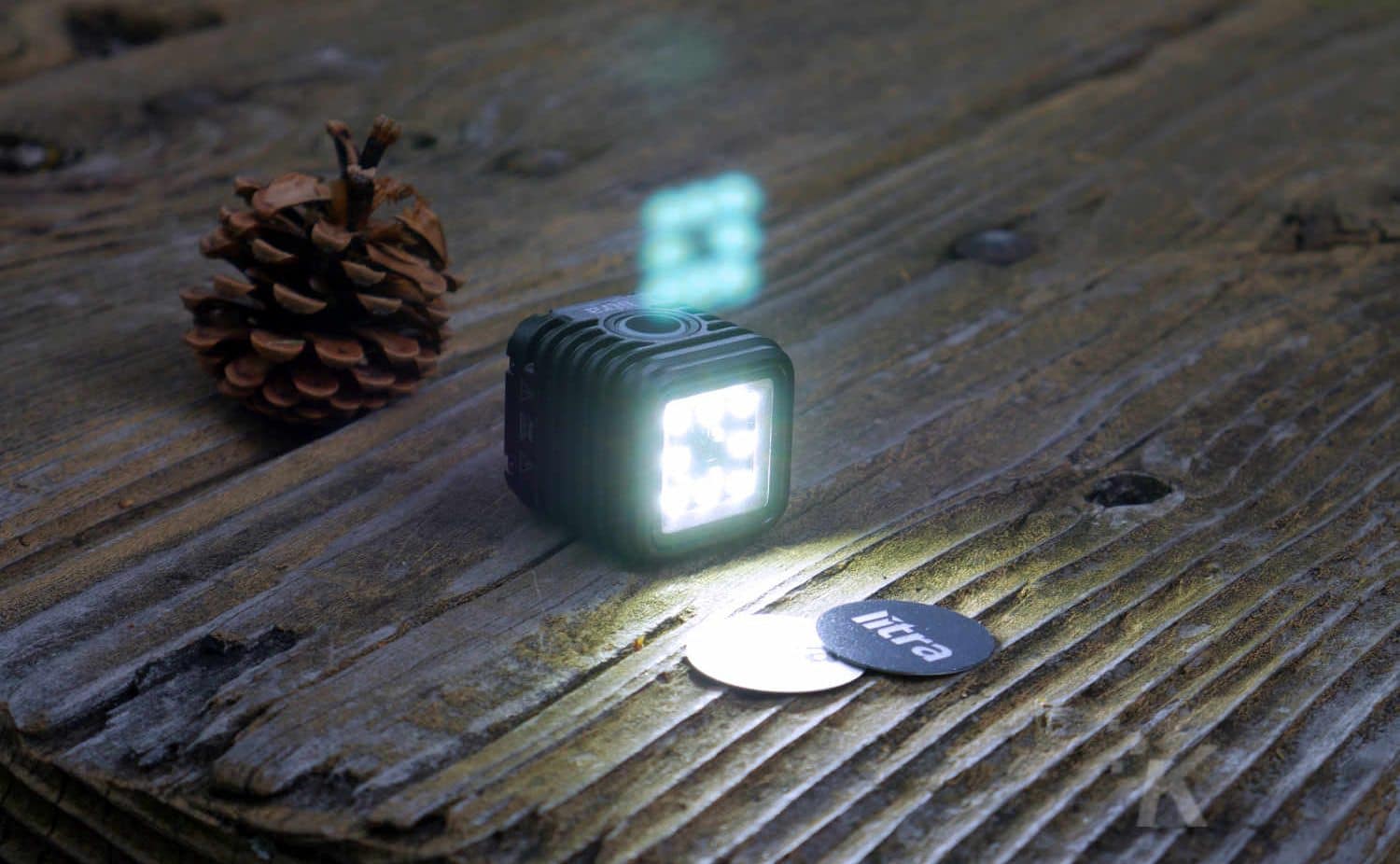 I do have some LED individual lamps, but a full kit would be even better as they’d be matched to each other, and ideally be able to link together to give the same output parameters when using. I’m been loving my LitraPro and LitraTorch, as they’re quick to recharge, have long runtimes, and the Pro has both Bluetooth control and a wide range of accessories for light shaping. I’m hoping to add a LitraStudio to the roundup, so I can also add RGB to the capabilities of my kit.

Until then, I’ve been using the Mangosteen Swing light bars for color lighting, which are pretty good. They also let you program messages onto them which show when you swing them around, although I’ve not used this much yet.

I love this Savage LED wand for using as a hair light for items, especially for wider things like monitors. That gives your images more texture, as it lights the edges of whatever you’re shooting from above and behind. It’s a little floppy though, so make sure you’ve secured it properly onto a stand.

One of the reasons I’m so excited about the macro lens I picked up is that it’ll be a perfect pairing with the Orangemonkie Foldio3 kit I’ve been using for a while now. This is a movable lightbox for perfect soft lighting of products, paired with additional LED lights and a Bluetooth-controlled turntable. It’s great, and my only regret is that I’ve not had the chance to use it as much as I should have. That’ll change now, with everything from artisan keycaps for keyboards to headphones all going under the lens inside it.

Most of my gear that didn’t come with its own carrying cases is stowed in Pelican gear. Most of it lives in an Air 1615 with TrekPak. Now, while it’s the largest air-travel allowed size Pelican makes, the best thing about it for me is that I can throw my tripod in without having to break the video head off. That saves time at both ends of every shoot, making every cent worth it. It’s also waterproof, and supposedly crushproof, which is great knowing that my expensive gear is inside it.

I’ve also got various smaller cases, such as the Vault V550, which is about to get the foam cut to fit my camera; the 0915 SD Card case, which is keeping my precious image storage safe; and the i1070 iPad case, which keeps the iPad Pro I sometimes edit on safe when I’m out of the studio.

When I’m wandering around and not using my tripod, I like to keep my Fujifilm X-T3 secure with a SpiderLight from Spider Holster. This carrying system not only keeps my camera secure and easily accessible, but it also doesn’t cover my battery door and has an integral quick-release chamfer so I can stick it easily onto my tripod again.

Keeping all my other gear charged up is a never-ending task, but Accell is definitely up to the task. I use their Power Wireless Block Mini to recharge my iPhone 11 Pro, iPad Pro, and all my USB-charged lighting, and their Power Cutie is always recharging the batteries for my Fujifilm X-T3 or my on-camera monitors.

I’ve also got a huge stack of props, backgrounds, and other supplies, from museum putty to keep things stable, to fishing line for hanging things (it’s easy to Photoshop out afterward), to tempered glass for mirrored shots, and aluminum foil which makes a fantastic backdrop once crinkled.

I’m sure I’m forgetting a few things, as my gear list is always changing. Just know that this was all gathered over several years of pursuing photography, so don’t feel overwhelmed if you are just starting on your journey.

What do you think? Did this guide help point you in the right direction for your own photography? Let us know down below in the comments or carry the discussion over to our Twitter or Facebook.